Home » Young and Restless » Y&R Recaps » Y&R Day Ahead Recap: Phyllis and Nick Get Into A Massive Fight, Billy Deletes Gaines’ Video, Plus, Victor’s Gift to Ashland is Unusual

Y&R Day Ahead Recap: Phyllis and Nick Get Into A Massive Fight, Billy Deletes Gaines’ Video, Plus, Victor’s Gift to Ashland is Unusual 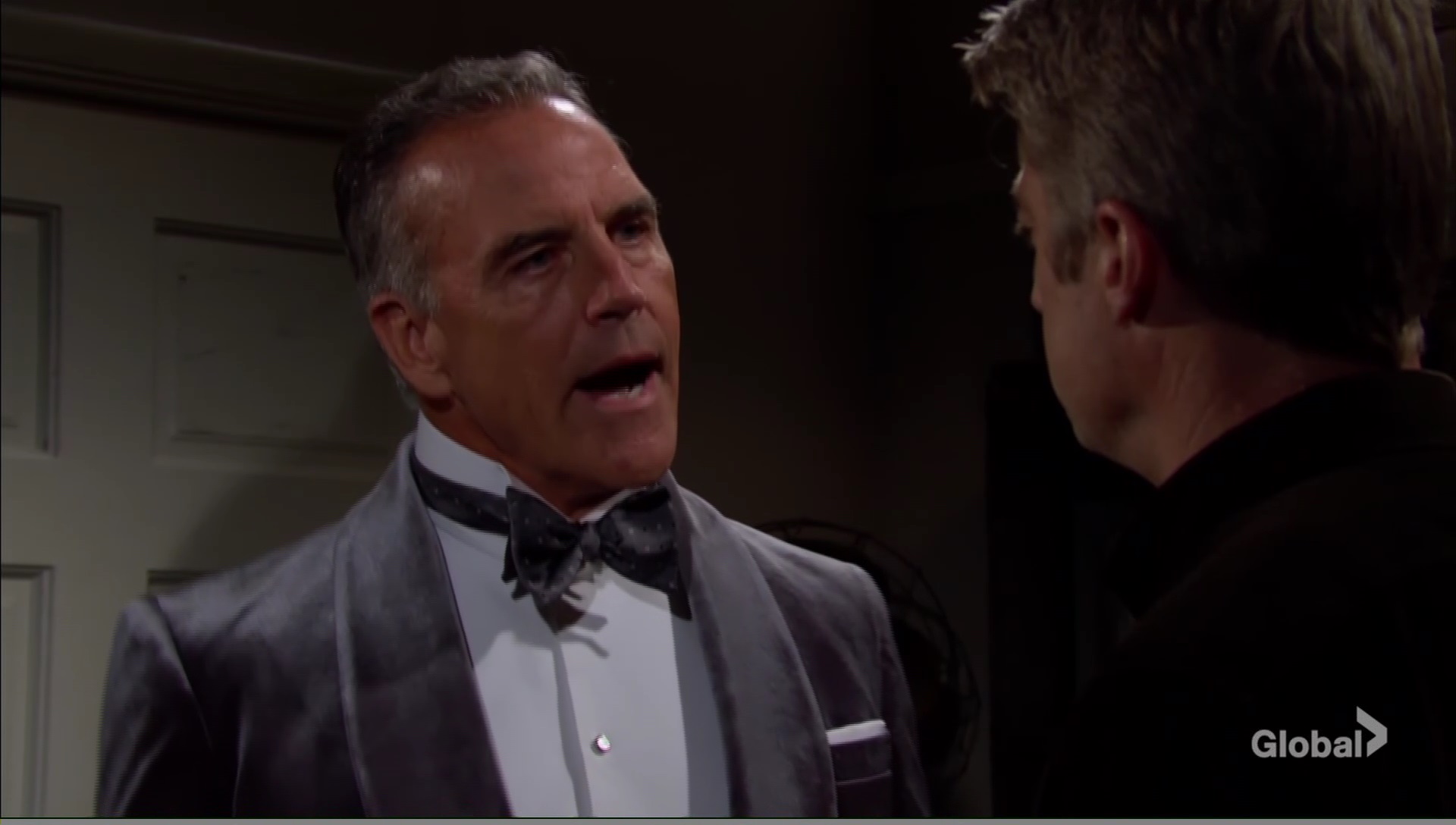 Soaps Spoilers has the Canadian Y&R day ahead recap for Friday, October 15, 2021 episode, which airs in the USA Monday, October 18. (Recaps live by 5:45 PM EST daily.) In the previous episode, Victoria hugged Sally in thanks after finding out she created her dress. In this episode, Victoria and Ashland get married, as Nick confronts Gaines.

Jack thanks Victoria for inviting her to this joyous occasion. He thinks she looks glorious. She asks if he’s seen Katie and Johnny. Jack tells her they’re hanging out somewhere with Harrison. Nearby, Lily and Billy go into the hall to discuss Gaines’ video, while Nikki and Jack talk to Victora about Sally designing the wedding gown. He’s startled. Nikki says it’s a long story. Jack goes off and sits with Phyllis. They discuss Nick. He tells her Victoria’s gown was designed by Sally. Phyllis is disgusted and rolls her eyes that Victoria treated her brother like crap “and then hugs Sally and wears her dress. It makes me sick.” Ashland finds Victor who tells him that Gaines was found and he’s somewhere safe, “Where you can have a one-on-one with him.”

Elsewhere, Adam and Sally discuss her pulling off getting Victoria to wear the dress. He can’t wait to see the social media “buzz” about the dress and the woman who designed it. He never should have doubted her. “You doubted me?” He admits that came out wrong. She has talent, passion, and drive to back it up. She put everything on the line. “A perfect storm,” she says. “In the best possible way,” he admits. Upstairs, Victoria and Nikki talk about how Vicki feels like she’s walking on a cloud. They can’t get over the gorgeous dress and that somehow, Sally made what she wanted. Victoria says she’d been studying her and says she oversaw the construction of it. She goes on, and on for long minutes about this silky masterpiece. Nikki hopes she doesn’t approve of what Sally did to Summer. She doesn’t but she’s staying out of that. The best things come from the most improbable situations, she tells her mama. She gets into a dressing gown and tells her mom that she and Ash actually talked about moving there.

Inside, Billy wants to publish Gaines’ video and Lily doesn’t like this or how he’s pushing them into a corner. “Either way, the word is about to learn about Ashland’s crimes.” Lily asks, “And what about Victoria?” Jack pops in with the same question. The cover and talk about the wedding. Once Jack takes off, Billy tells his gal that if they don’t run with the story, someone else did. At least they can control the narrative. Lily asks why he can’t just support her decision of Vicki marrying Locke. “Are you just trying to have it both ways?”

Upstairs, Nick tells Phyllis that he found Gaines. He explains who the man is and why he was brought there. He’s more upset that his dad brought Adam into the inner loop and left him out. They’re working hard to protect the marriage and merger for a man who stole a dead kid’s identity, who let his best friend die in a car and took a job interview that was meant for him. Phyllis stammers, “Well, this is in your dad and Adam’s wheelhouse.” Nick tells her about how Locke forged a letter superseding the will of Camila Rhodes to ensure he got her estate. Phyllis is shocked. Nick doesn’t get why Ashland has such a tight grip on his family. Phyllis reminds Nick that this is why he branched out on his own. They agree Ashland is a criminal and Phyllis starts to rant about his family. Nick calls her out on attacking them and she claims it’s not what she was doing. She gets upset. She isn’t his enemy. She calls Victoria an adult who can make her own decisions. She hates Victoria but she’s savvy and one of the smartest people she knows. “Can you not let her make her own decision about this. She’s not a damsel in distress.” Nick knows. Then why does she and all the Newmans and Billy have to write in and rescue her on their white horses? Nick talks about the way his family treated her when they reunited and he didn’t want that for his sister. Phyllis thinks that means that Nick thinks she’s a mistake. “What? What are you talking about? I’m not making that comparison at all,” he snaps before taking off.

Ashland unlocks a door to a wine room and tells Gaines that coming there was a colossal miscalculation. Since he’s been paid off, Ash wants to know what more he wants from him. He wants to humiliate Ashland since his dad humiliated him while he refused to embrace his own love. Ashland knows what that’s like. His father was the same and beat him brutally. He asks Gaines what he wants. He gave him money, Vic gave him money and he could have walked away wealthy. Gaines asks what he’ll do. Ash has no idea. He yells that he’s the last thing on his mind on his wedding day. They’ll figure into out. He leaves the man in the room, locked in.

Downstairs, Tessa leaves a message for Mariah about the beautiful and perfect wedding. “The only thing missing is you,” she says. They could have danced all night at the reception. She wishes she were there. She disconnects and looks sad. Noah finds her. She cries and tells him Mariah’s shutting her out, slipping away and she doesn’t know what to do. They discuss Mariah being locked up and how they talked about having babies and that they disagree on the timing. Noah comments on how long it took him to be okay with her being with his sister. He wishes he could help.

Ash says hi to Lily and Billy inside. Lily tells him the ceremony was wonderful. He tells them Gaines has backed down and admitted that Billy brought him there to reveal everything. Billy doesn’t deny it. Ash says the only threat is from Billy now. Ash asks him not to release the dirt he has on him for the sake of his son and wife. Billy tells Ash about Gaines’ video. He shows the man and then deletes it. Ash thanks him. Billy didn’t do it for him. He did it for the continued well-being of his kids’ mother. Ashland thinks that’s a gift. “Some things are more important than my job,” he says. Ash goes and Lily is proud of Billy. Ash goes to his room and he and Victoria talk about Harrison and how he feels connected to her family. They discuss him handling Gaines. He tells her the situation was dealt with. He also talked with Billy and shares that. Ash was surprised that Billy dropped the whole Gaines thing and dropped a video Gaines sent right in front of him. They both think it was incredible. Downstairs, Jack tells Sally he heard what she pulled. “Lucky for you she liked the dress,” he says. Sally says that everyone knows it looked incredible and wonders why he can’t admit that it was a great dress that she worked hard on. Jack isn’t sure why she cares about what he thinks. She shrugs and sees Adam. “There you are. Let’s have some fun.” He takes her dancing but Victor stops them. He ignores Sally and lets Adam know they have something to attend to. Adam promises to catch up with Sally later. Inside, Victor tells Adam that Gaines is likely to stay a problem. His gift to Ash is to ensure that doesn’t happen. Adam vows to protect their family and will do what it takes. Nick appears. There are some things they need to clear up. Ashland and Victoria, meanwhile, wander down to the party after she has changed into a white dress. Everyone claps.