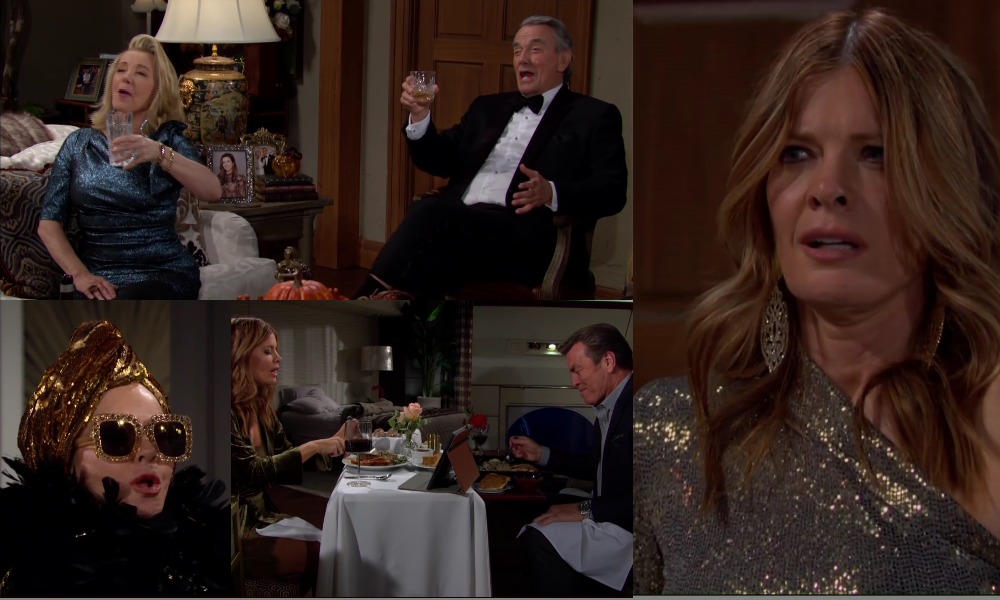 Canadian Y&R day ahead recap for Tuesday, November 23, 2021 episode, which airs in the USA Wednesday, November 24. (Recaps live by 5:45 PM EST daily.) In the previous episode, Victoria and Ashland offered Lily a job. In this episode of CBS’ The Young and the Restless, Phyllis has a stand-alone episode where she considers her future on Thanksgiving.

Phyllis drops by Crimson Lights and says hi to Sharon, who apologizes for the mess. They’re keeping up their tradition of giving to the needy. There’s food everywhere. She tells Phyllis to help herself to coffee. Phyllis offers to help since they’re not starting their food service later. Sharon’s touched. Nick arrives with boxes of food.

Sharon tells him nobody should be alone today. Nick tells Phyllis, “Happy Thanksgiving.” Phyllis says it back and Sharon thanks Nick for always helping. He says Christian’s interested  as well.

Sharon likes that idea and will find something fun for him. Phyllis watches how friendly they are with each other and then suddenly says she has to go. Something at work fell through. She bumps into Billy on her way out. They greet each other and she pretends she has big Thanksgiving plans. She says she read the article about Ashland and the “embarrassing retraction.”

Gloria appears at Phyllis’ side at Grand Phoenix. She feels good after a spa treatment because JVC is doing phenomenally well. Phyllis tells her that her crew is leaving early to spend Thanksgiving with family. She asks if Glo’s spending it with family. She’s off to Kevin and Chloe’s for dinner. She asks if she’s alone and Phyllis claims she isn’t. “That’s ridiculous.” Gloria jokes to look on the bright side. “You don’t have to fight anybody for the drumstick.”

Glo goes and Phyllis meets with several patrons who ask what she’s grateful for. Later, she goes to her room and looks glum. She kicks off her shoes and grabs a bag of chips. She crunches a few and calls Summer to leave a message, wishing her a Happy Thanksgiving. She calls Daniel and says she misses him and will get out there soon. He asks how she is and she says she’s doing great. “Talk to you soon,” she says. She tells him she loves him and drinks some wine then gets in bed and watches television. She falls asleep.

Banging wakes her up. She throws on a robe. “Call me Golden Glo” is there to help her. She tells her to get dressed.

She has places to be. Phyllis doesn’t want her poking her head in where it doesn’t belong. Was she sniffing too many bath salts at the spa? Golden Glo notes that she’s watching True Crime Stories and doesn’t think that’s the way to ushering the holiday season. Phyllis threatens some true crime of her own if Glo doesn’t go. Glo’s offering her a “do over.”

Golden Glo claps her hands and Phyllis winds up dressed at the coffee shop. Phyllis could have suggested Hawaii or Bali. She sees Sharon, who is muttering that they could have used Phyllis’ help and she doesn’t buy her excuses. Phyllis apologizes and says she’ll help her now. When Sharon doesn’t respond, Phyllis realizes this is her dream. “This is great,” she says. Sharon tells her she’s glad she returned. She’s one of the people she’s most grateful to this year.

Phyllis thinks it’s a joke but Sharon reminds her of her support during her cancer treatment. Sharon calls herself entirely responsible for all their dust ups but Phyllis took responsibility. Sharon comments on how rude she was yesterday about Jack. Phyllis is glad. Sharon asks her to heal a few old wounds while they feed the hungry. Phyllis is happy. They usher people inside and feed them. Phyllis is in a great mood. She offers them seconds and says, “I really do feel the love.” Golden Glo turns up and Phyllis tells her to buzz off.

Phyllis ends up at the ranch in a glitzy outfit. “I’m in the belly of the beast,” she says. Victor and Nikki turn up. Vic with a knife in his hand and Nikki with a big fork. They’ve been waiting for her. She panics. Nikki’s glad she made it in time to carve the turkey. Phyllis is confused. Nick arrives. They’re glad she’s there. “No you’re not. You despise me,” she says. Nick owes her a thank you. He took her advice. “Your very wise advice,” Nikki says. He’s staying out of the chaos of his family’s drama.

Adam finally left town, Victoria forgave him and Dad accepted him for who he is. “I am so proud of my boy,” Victor says, patting Nick’s back. Phyllis doesn’t want to say I told you so…”But…” Nikki calls her the voice of reason. Phyllis’ mouth drops open. She decides to celebrate and seems happy as they drink wine and she tells them jokes about work. This is the best Thanksgiving she’s spent with them. She likes having peace among each other. Nikki says they’re finally united and have her sage wisdom to thank. They’ve stopped meddling. They do three cheers to Phyllis.

Phyllis finds herself in a red glitzy gown and at Society. She watches Jack, Ashley and Traci discuss how being reunited with someone from the past being magical. Phyllis looks confused. This can’t be about her. His sisters would never be happy about that. Jack says she’s late. In walks Gloria. “You look gorgeous,” says Ashley, making Phyllis look completely baffled. Gloria excuses herself and Phyllis tells her, “Some Fairy Godmother you turned out to be. Golden Glo. Wow more like Golden Ghoul.”

Glo insists it’s not her fault Jack’s with her. “This is your subconscious.” Glo thinks she’s intimidated by her because deep down she thinks Glo holds the key to Jack’s heart. “That’s insane,” Phyllis says. She calls this like a mash up of irrational incidents. She puts an end to it by telling Jack, Traci and Ashley that she, not Glo is the great love of Jack’s life. She tries to sit and they all say, “NO!”

Phyllis says Traci wants her here. She’s the good one. The kind one. Traci says it’s not up to her. She reminds Jack she cheated. Ashley would rather Glo with Jack. Ashley’s excited about the meal. Jack’s considering asking Glo back to Jabot. Phyllis reminds them she’s a grifter. They ignore her and pour the wine.

Phyllis finds Billy nearby. She asks why he’s there but he isn’t sure. “It’s your dream.” He apologizes for how he screwed things up for her and Jack. They agree they work well together. Billy thinks she’s exiled herself from Thanksgiving out of guilt. She tears up. Her kids are doing great. Billy knows she misses Nick but she’s there because she’s missing Jack. “Really? My head isn’t on straight,” she says.

She calls Jack amazing. “And you’re not?” Billy says. Phyllis cries. “I didn’t say that.” Billy thinks she deserves love whether she admits it or not. She cries and nods. What should she do to try to get Jack back? Billy says, “If I were you, I would —” He’s cut off by Gloria and Billy walks away. It’s time to go. They reappear at her room again.

Phyllis needs to talk to Billy. He was about to tell her what she should do with her life. “You choose very odd confidants,” Golden Glo responds. Phyllis nods. She does. She chose her. “I must love torture,” she gripes. Phyllis says Billy’s similar to her — recklessness, and she thinks he has it all figured out. She needs to have that. She begs Golden Glo to bring her back.

Suddenly, she wakes up in bed to pounding on her door. Thomas turns up with Thanksgiving dinner for her. Someone ordered it for her. He doesn’t know who. She tells him to go home to his family. Later, as she’s dining, Jack video calls from the flight. He hopes she’s enjoying the food.

Phyllis tears up, grateful to him. Jack says they’ve just landed and start their search for Abby tomorrow morning. Ashley’s dealing with airport security. He shows her his plate of food. It wasn’t easy getting turkey and stuffing on the flight. He wants to dine with her.

(Reminder that Thursday is a repeat and Friday sports take over so this is our Friday.)

Amanda and Imani drink to their future. “To Sinclair and Benedict, Attorneys at law.” Imani says, “Maybe it should be Benedict and Sinclair!”

Jill says to Lily, “I want you to take over for me at Chancellor Industries.”

Abby asks someone, “Why didn’t you let him reach out to me to tell me he was alive?” Chance appears and says, “Cause she knew it’d put you in terrible danger.” He comes to her and she jumps into his arms with a hug.