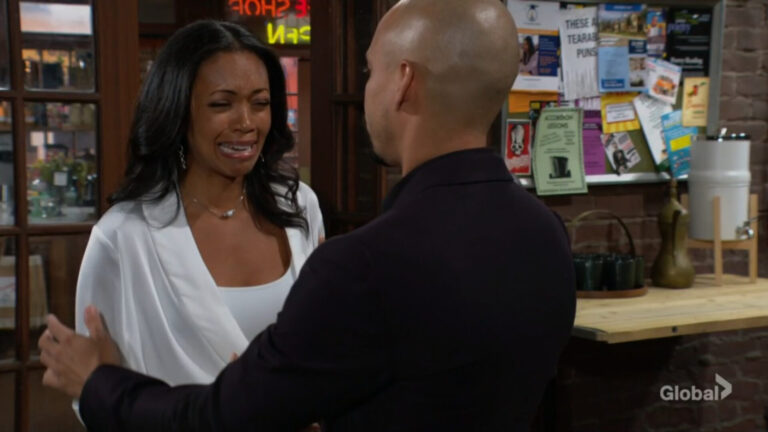 In this episode of CBS’ The Young and the Restless, Amanda gets devastating news, Billy has questions for Abby and Kevin and Chance piece things death together. In the previous episode, Phyllis, Nikki & Ashley disagreed on their scheme, and Sally had a run-in with Adam.

Victoria’s shocked to see Billy in her office. She assumes he heard about Locke’s death. He’s not there for her, is he? He claims he’s there for the kids.

He asks what happened and how she is. She explains how it went down. Billy tells her about speaking with Nick about his concerns that Ashland was going dark.

Victoria says her brother saved her life because of Billy.

He thinks it’s interesting how Ashland died the same way he brought on his new identity. In a car crash. He thinks Victoria will deal with this with grace.

She thanks him and they hug.

At Crimson Lights, Nick finds Sharon. The place is empty, so she agrees to lock up. He tells her that Ashland didn’t die in the car accident. “I killed Ashland Locke.”

Sharon’s rocked. He shares the story. She’s so sorry. He confesses to what his father did. That doesn’t surprise the blonde but Nick doesn’t like it.

He doesn’t regret protecting his sister but he hated Ashland and wanted him out of their lives. He didn’t intend on killing him.

His dad botched this whole thing, making him complicit in his crime. “Now you are too,” he realizes. She assures him she’s fine but he apologizes.

“We never had this conversation,” he says. They discuss how Victor thought he was protecting him.

Sharon calls it an accident but Nick knows it’s on him and says Chance suspects there’s more to the story.

Nate admits he made a rookie mistake and it could have been avoided if he talked to Devon. Devon appreciates him trying to lighten his load.

He’s probably used to not needing approval. Nate agrees and it’s a learning curve. He’s focused on being #2 from now on. Devon appreciates it.

Amanda turns up, upset. She’s in tears and explains Naya’s in a coma. Both  men are very sorry to hear. She worries Naya will die before she can say goodbye.

Nate tries to reassure her that it’s not set in stone. Devon tells her to fly back to Virginia for a few days.

They’ll take care of everything. She balks. Nate says she can handle things remotely.

They tell her to get her favorite music. She cries when she realizes she doesn’t know what it is. Imani may. Devon offers his jet to her and she embraces him.

After Devon and Amanda leave, Elena turns up to ask about her contract. Nate ignores her before he finally reveals Amanda’s mother lapsed into a coma and that Amanda’s headed to Virginia with Imani to deal with that.

He’ll miss Imani since she’s been helpful to him. Elena’s  not happy to hear Imani fuelled the tension between him and Devon.

At Society, Abby doesn’t get why Chance is bothering to investigate Ashland’s death. Is there something he hasn’t told her?

Before he can say anything, Kevin rushes up with an update. Chance makes the cut off sign around his neck and tells his wife he has to go. Once he’s gone, Chelsea wanders in.

Abby is pleased to tell her that her kid is almost walking while Chelsea explains her kid is all about sports. They talk about getting together and Abby says they can roast marshmallows and do macrame but Chelsea needs no space. She’s recently made bold changes. Abby’s happy for her.

In the park, Kevin explains to Chance that he went over the feed from the gas station and it was blank. The manager said it’s happened before. Chance is still suspicious.

There may have been another person in his vehicle that night, footprints around his car and a cigarette butt nearby. Chance says it’s not proof but still suspicious.

Maybe he disabled the security videos. Kevin doubts that. Chance says cause of death was a traumatic blow to the head, which could have been from falling into the fireplace. Kevin shrugs.

Chance isn’t sure he could have had a thready pulse, gotten up and walked to his car. They conclude it’s possible Victoria and Nick moved the body.

But if so, why? And did the ring fall from his pocket when they moved him?

Nick finds Billy with Victoria in her office. He thanks Billy for giving him the heads up about Locke.

Billy thinks what he did was for the greater good. He goes and Nick spills his guts to Victoria about the cover up in Ashland’s death.

Victoria’s surprised but wonders if their dad did the right thing. Nick’s disgusted but Vicky maintains that he did what he did to end the chaos. Nick thinks lying to the cops wasn’t the right way to deal with it.

Billy finds Chelsea and Abby at Society. He asks why Chance is looking into Ashland’s death since it seems like an accident. Abby has no clue. Billy realizes Chance has integrity.

It’s why he likes the guy. Abby goes to get coffee while Chelsea talks about her new ideas for the podcast. Abby returns with the coffee and learns about her new gig with Billy.

Chelsea stares at Billy and beams as she tells her friend it came at the right time.

Amanda and Devon arrive at Crimson Lights. She breaks down sobbing that she may not have a future with her mama. Devon’s comforting.

She knows she has her sister.

She’s ready to go and isn’t sure when she’ll be back. He thinks she should take all the time she needs. She’ll miss him. They kiss.

Back in Victoria’s office, she realizes they’re complicit in a cover up and she needs to talk to Victor. She moves to the door and opens it to find Chance. She asks how long he’s been there. He just got there. They gawp at each other.

Nikki tells Abby that she thinks Chance should back off Ashland’s case, which shocks Abby.

Jack thinks Adam has so many opportunities to prove himself to the world. “Come work with me at Jabot!”