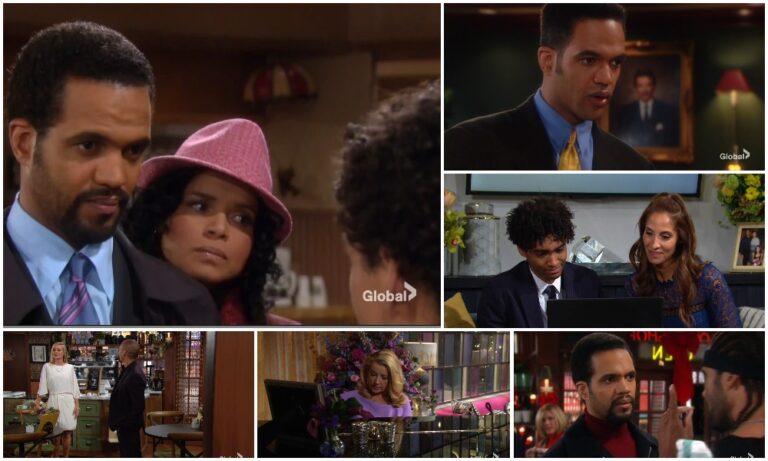 This is the Canadian Y&R day ahead recap from the Thursday, May 27, 2021 episode, which airs in the USA Friday, May 28. In the previous episode, Summer postpones the wedding while a paternity test is done to confirm if Harrison’s Kyle’s kid. In today’s episode, we remember Neil Winters.

At Society, Devon remembers Neil welcoming him to the family with Drucilla.

At ChanceCom, Lily and Moses look at old photos of Neil and Lily says everything’s good on their end. She’ll check with Devon. She video chats him. He tells her everything is ready to roll. Moses has the invitations ready to go. They send them off and Lily reads tributes. Lily hopes this isn’t too much for Moses. It’s not. She tells him she loves him. Moses misses him. They didn’t get a lot of time together so Lily wants to help share memories. “I even have some dad jokes that are pretty funny.” She asks why farmers play jazz music in their cornfields. “Because it’s easy on the ears.” Moses smirks. She goes on to tell another but Moses has had enough and laughs.

Nikki arrives at Victor’s office. He’s on his cell, reading. Nikki gets an invitation to Neil’s memorial and they both read them aloud. He flashes to a memory of Neil at work.

In their own homes, Ashley, Amanda, and Nick get invitations as well. Later, Devon appears and Sharon shows him she has a necklace on that used to be Dru’s. Neil left it to her. Elsewhere, Nick and Rey talk about how Nick used to play hoops with Neil and dump their problems on each other. Rey is willing to help Nick with anything and they could shoot some hoops together, but he currently has no problems. Nick says, “I will wipe the court with you.” Rey smiles. “Any time. Any place.” Nick thinks about playing basketball with Neil and shoots paper in a basket. “I’ve still got it.”

The memorial is a tour of Neil’s old stomping grounds. Sharon reads her invitation and discusses the music that will be revealed. She puts up a sign and tells Rey she’s involved. She’s giving away a free cup of coffee to everyone on the tour.

In the park, Nate puts up a photo while Jack reads the invitation. Nikki realizes Victor knew all about this.

Nate bumps into Amanda at Society, listening to music and looking at a plaque for Neil. Devon wanted to do this on his own so she’s by herself. She’s never had a family to miss so doesn’t know what this is like. Nate thinks he’ll need his friends today.

Phyllis drops by Jack’s to see how he’s doing about Neil. Jack says it’s been an emotional day. Phyllis knows he was determined to help with Jack’s pill addiction. If he needs to talk, she’s there. Jack appreciates it. Today he’s not remotely interested in falling back on his addiction though he’s struggled before. To honor Neil, Jack will live this one day sober.

Jack goes to Victor’s office. They agree Neil would be proud of what his family did for him today. Jack hopes Victor will do right by Adam, knowing that he wants his approval. Victor could say the same for Kyle. Jack gets angry and they start arguing. They realize Neil would tell them to stop the bull on today of all days.

Amanda finds Lily crying at ChanceComm. She didn’t think today would be that hard. She deals with his loss daily.

Nate finds Devon alone at Crimson Lights. Nate wouldn’t miss today for the world. He thought he knew everything about Neil but he learned a few things and “that playlist blows my mind,” he says. He brings up Malcolm and remembers Neil talking to his brother about thinking he was dead. Nate and Devon don’t want their relationship to suffer the way Malcolm and Neil’s did.

Ashley visits Sharon at Crimson Lights and drinks a coffee with two cream, two sugars, the way Neil liked his. She tears up a little and says she’d like to think Neil knew he was loved.

Nikki goes to Society and hears music she recognizes. She sits at the piano and plays while she looks at Neil’s photo. Jack appears and once she’s done, he claps. She tells him Neil asked her to perform it for a charity concert. Jack tells her Devon’s launching a new jazz label called Winters’ Move. It’ll fund the treatment centers. Nikki’s touched. She tears up. He meant the world to her. Jack agrees. The three of them were each others’ village.

Devon goes to Victor’s office and they talk about how much Victor was a good friend to Neil. Moses pops in later, once Devon is gone and Victor tells him to sit in his chair. “See if you like it.” The kid does and says it feels great, “Like I could rule the world.” Victor says if he wants to abandon his medical studies, he’s always welcomed there. Ashley turns up and tells the kid to stick to his guns. “Well my goodness, Ashley Abbott.” Victor respected Neil a great deal for doing just that. Ash calls it high praise.

Lily cries at Society and thinks back to Neil visiting her when she was a teenager. He cleared his schedule and wanted to spend the day together. She looks crestfallen.

Devon finds Amanda at society. She wants to help him through today. He appreciates her and admits it’s a tough day. His voice shakes as he talks about his father being gone.

At Chancellor Park, Nikki and Victor talk about Neil and his visits today. She can see how he’s feeling today by the look in his eyes. Victor sighs. “He passed much too soon, didn’t he?” Neil was one of the few men he trusted. Nikki lays a rose down and later, Sharon and Rey and Jack do the same. Nate and Phyllis and Nick appear and they too drop roses on the bench in front of his photo. Ashley comes in with her own rose and spends a minute smiling at Neils’ photo. Amanda drops a rose down and Devon sits nearby, crying. Amanda leaves him alone and Lily shows up. They hug and Moses appears. They hug him before a tribute comes up for Kristoff St. John.

Kyle has the results of the paternity test!