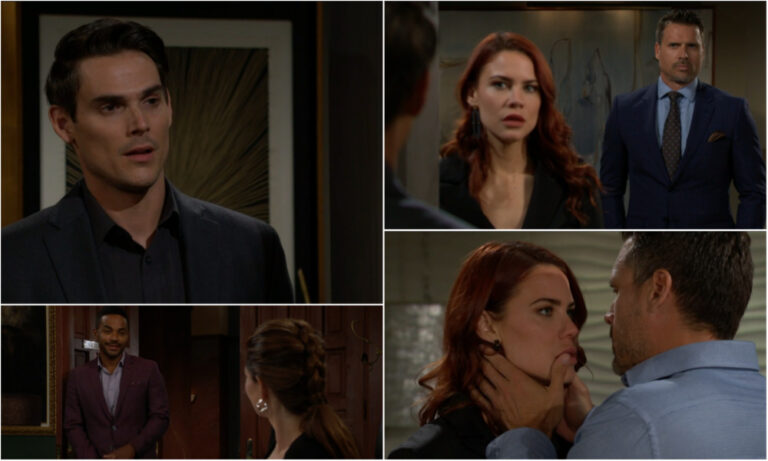 In this episode of CBS’ The Young and the Restless, Elena tries to talk Nate out of his plan, Sally apologizes to Victoria, and Lily deals with Imani. In the previous episode, Jack encouraged Diane to prove herself, and Nate told Elena his idea to get back on top.

Chloe arrives at Newman Media with donuts and an apology for the way she behaved last.

When it comes to Adam, they can agree to disagree, as long as Sally can keep her personal stuff out of work.

She realizes she again scolded her and it’s not conducive to friendship. Sally agrees she should immerse herself in work but she has an errand and takes off.

Nick arrives at work and Victoria talks about their newest acquisitions and thoughts about Nate Hastings. She knows things at Chancellor/Winters have been intense.

Nick agrees he seems ready for a change. They ponder how to utilize him.

Talk turns to Sally and Vic assumes he put her on notice since she blew off that marketing meeting.

Nick looks around, uncomfortable. Victoria hopes he didn’t accept her apology. He calls it a mistake and says he’s handling it. Sally interrupts to apologize to her for missing the meeting yesterday.

She knows Victoria understands how life encroaches on work. She’s in awe of Victoria’s ability to compartmentalize and wants to emulate that in time.

Nick needs to talk to Sally about “that other matter that we got into yesterday.” She’ll make time for that.

At the office, Lily, Devon and Imani discuss Nate’s abrupt departure. Lily worries about the legal ramifications of this. Imani’s defensive that all they care about is non-compete rules from his contract.

“Is this how this family works?” Lily explains to Imani that they need to protect their intellectual property.

Imani knows and thinks that ensuring Nate stays is their best bet.

Devon doesn’t want to force Nate to stay somewhere where he doesn’t want to be. Lily won’t give up on Nate and hopes her brother will keep an open mind. Imani agrees to track down information on Nate’s NDA.

She takes off and the siblings agree to keep the IPO secret for now.

Devon thinks she’ll make an impulsive decision about something important. She doesn’t appreciate him challenging her decision-making abilities because they differ from his.

He denies doing that but hopes approval takes a while. Lily reminds him it’s up to the two of them.

Devon includes Jill but thinks he’s on his own with his feelings about this.

At Elena and Nate’s, she and Nate discuss how much stress he’s under. She wants to support him in moving on. He still wants to go ahead with his plan. Now, more than ever, in fact.

Elena begs him not to. It’ll only cause more problems, not to mention how Lily will take it. “It feels so right to me,” Nate says, thinking she misconstrued his motives.

He’d be helping Lily with his plan. He wants to succeed, and nobody seems to get that. “Except for Imani?”

Elena asks. Nate reiterates that this is his time and the best way to make a lasting mark so he can “finally take control.”

Sally and Nick have coffee at Chancellor Park. It’s awkward and they agree they don’t want things to be complicated between them. He urges her to be herself.

She admits Adam came by her place with declarations that messed with her head. Nick doesn’t want to make things harder for her if she wants to be with his brother.

He knows she has strong feelings for him. He thinks that’s for her to sort out without him being “any sort of factor.” They look into each other’s eyes for a moment.

Adam finds Chloe alone at Newman and she tells him Sally’s with Nick. Adam’s annoyed. He never spent that much time with Newman when he was CEO.

Chloe slams him for being the one to make Sally forget about her meeting yesterday. He knows.

He heard when he saw her last night. Chloe yells at him, asking why he’s compelled to ruin the lives of everyone he’s involved in. He tells her that’s enough and won’t hear her bash him.

He takes off. She texts Sally to warn her that he was there looking for her and asks her to put a stop to this.

Adam goes to Victoria’s office to find Sally. Vicky tells him she and Nick went for coffee. She takes a moment to bash him and lets him know that Sally blew off a meeting.

She reveals Nick took care of it and Adam doesn’t think one missed meeting should mean her career is over. Victoria agrees but knows there are others around to replace her if it happens again.

She asks Adam to let Sally go and move on with her life. He’s so tired of hearing that. He loves Sally and made a terrible mistake that he’s trying to fix.

He thinks she can’t admit when she screwed up which makes it no surprise that she has no clue of where he’s coming from. He leaves and she texts Nick that Adam’s looking for Sally. “Trouble for her = trouble for us,” she says.

Imani meets Nate at Society and tells him about the emergency meeting at Chancellor/Winters.

She reveals she tried talking to Devon, but he’s stubborn.

Nate appreciates her defending him but he wants to think more ruthlessly as she suggested He’s taking her advice now.

Elena runs into Devon at Crimson Lights. Neither are in good moods and admit Nate has them both down.

She’s unhappy about the path Nate’s on. Devon’s sorry.

Lily appears and eavesdrops as Devon thinks it’s for the best that they don’t work side-by-side since they don’t have the same philosophies.

“That’s for sure,” Elena agrees.

Lily interrupts and Elena gets going. Lily tells Devon she doesn’t like that Nate feels his only option is to quit and she blames Devon.

She says Nate’s not blameless either but Devon is being unfair by not even listening to any of his ideas. Devon tries to defend himself but she asks him to listen. She wanted to build something for their family.

“I can’t lose him,” she says about Nate. She asks why it’s so hard to let Nate have a win. She asks if he’s been so autonomous for so long that it’s hard to give up control.

Maybe he’s punishing him for what happened with Elena. He tells his sister this isn’t payback and it feels bad that she’d imply he wants payback. She’s sorry.

He says there may be truth to what she said about his leadership skills and he tends to think he knows best because he’s been working in the business field since he was a teen. As they talk, he gets that she thinks he needs to let Nate fail from time to time.

Sally and Nick wind up at her place, making out.

They have sex in her bed and afterward, she says she didn’t expect this to happen.

He didn’t think in a million years… “Billion years,” she says. “Trillian years,” he says.

They go on like this and he kisses her cheek. She says they need to get back to work.

Nate visits Victora in her office with a proposal he thinks she’ll like.

He reveals that Chancellor Winters may go public.

Jill and Lily want this while Devon’s not interested.

He wants to be her inside man, feeding her information so she can buy up shares and gain majority control.

In return, he wants control of the company. “You’d do that to your family?” Victoria asks.

Adam asks Sally point blank, “Are you sleeping with my brother?”

Kyle gets down on one knee and asks Summer to remarry him, much to her delight.

Deacon tells Nikki he’s thought a lot about her over the years.

She purses her lips and says, “Really.” Deacon tells her, “One more thing. Nick? You look good.”