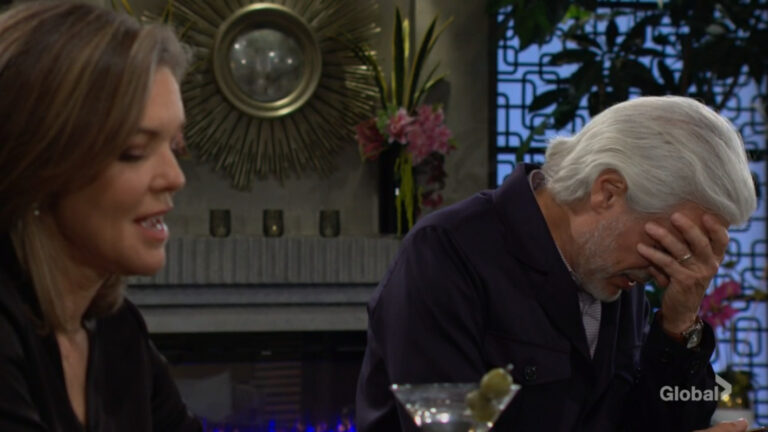 In this episode of CBS’ The Young and the Restless, Allie reveals why she’s in Genoa City, Kyle says he’s going back to Milan, and Phyllis catches Michael with Diane. In the previous episode, Diane was in the hot seat with Kyle’s family and Nate and Elena shared some romance.

At Grand Phoenix, Kyle tells his mother he’s leaving Genoa City. She’s crushed, and he lets her know that he’s leaving because he needs to see Summer. It’s been a while and he needs her insight.

He’s still wrestling with what to think about Diane’s return from the dead and wants to weigh in on how his wife feels. Diane understands.

She asks what his family thought about her but he won’t share that. It’s not fair to. Diane gets it. She asks what she can do to get another chance with him.

He says there’s nothing she can do. He hasn’t given up on her but needs to know if it’s because he’s trying to fill a void her death created, and how the choice affects Summer and Harrison.

Kyle can’t put him through more hell. Diane’s proud of the father he’s become. She tried to be a good mother but fell short, she says. She thinks she might go back to L.A. He says she can or she can mend fences in GC. Kyle allows her to hug him before he goes.

At Society, Lauren can’t stop thinking about their trip to France. She talks about retiring there. He had a great trip and was glad she suggested it.

They needed the rest. He promises his next job won’t be so stressful. She asks him to rethink working for Victor. Michael reminds her that Victor loaned them his private jet to get to France.

That scores him some points, she concedes. Michael thinks that Ashland is probably out of their lives for good now. Lauren hopes so but knows things will never be quiet with the Newmans.

But the south of France would be peaceful. He reminds her she’d have to retire if she wanted that life. Is she ready for that? She says she could work remotely.

She blames Victor for his stint in the jail in Peru but Michael says it’s Locke’s fault. When push comes to shove, he asks if she really could let someone else run Fenmore’s.

She can’t respond, so he knows her answer was a resounding ‘no’. He finds that sexy about her. They can thrive in their careers and when it’s time to retire, they’ll know it. “We’ll go hand in hand. What an adventure that will be.”

She’s in. She’s just worried about the dangers of his job. She takes off back to work after a kiss goodbye.

At the ranch, Sharon’s dressed in black for the memorial. Faith and Noah find her beautiful. Noah made up a slide show that they can project during the service.

Mariah and Tessa arrive with food for after the ceremony. Sharon’s grateful they are all there. Before they go, Sharon finds Chelsea at the door.

Mariah apologizes that the memorial is just for family.

Sharon decides to let Chelsea come and tells her that the accident wasn’t her fault.

Rey had a heart attack and would have died whether he was on the road getting tickets for the hockey game or not. Chelsea’s grateful to be told that.

At the Abbott’s, Allie apologizes to Jack for sobbing. She’s embarrassed but he tells her it’s okay to be emotional in front of her grandfather. She’s always got a soft spot to land there.

He made a lot of mistakes with her father and doesn’t want to repeat them. Allie admits she came because she could use someone to talk to. “Something did happen.”

Her mother came to L.A. after Jack left and she thought the woman was there to see her. It was about her dad’s estate. She had to sign legal papers.

Allie wanted to talk to her about Jack and her dad’s side of the family.

She didn’t get the chance to ask. She wanted the visit to bridge the gap but she was there one night and left immediately after. Jack finds that unconscionable as a parent.

Allie thinks it would have been better not to see her at all.

She feels the loss of her dad more because of this. She cries more. Jack knows it’s hard to come to terms with the loss of a parent. Allie felt empty and lonely and was compelled without thinking it through to see Jack.

Sharon, Nick, Tessa and Mariah return to the ranch with Sharon, Faith and Noah. Sharon thanks the family for coming to the memorial for Rey. She thanks Tessa for singing and Noah for his photo montage.

Nick says Rey was determined to turn Nick into a soccer fan and it didn’t work. He’s an “American football fan.” They used to joke about whose sport was better. Noah calls him easy to be around.

“He never really treated me like he was his wife’s son. He was like a buddy.” He remembers miss-buttoning his shirt one day and Rey caught it at the coffee shop. He recalls that Rey smirked at him and told him about it before Sharon noticed.

Sharon asks Chelsea if she wants to say anything and Chelsea says he was just a good friend. She chokes up and can’t say more. Tessa and Mariah think he’s helped a lot of people.

Sharon received a lot of notes from many. She cries as she tells them that sometimes Rey told her and other times, he never mentioned it because he wasn’t a grand-stander. “He was a real hero.”

Mariah offers to go with her to Miami and then Mariah but she wants to go alone. She won’t be long. “This is going to be the last trip I ever take with Rey. The long goodbye. I just prefer it was the two of us. I hope you understand.” They do. She goes off for a nap.

Back at the Abbott’s house, Allie and Jack look at photos of the family. Kyle appears and they invite him to Society for dinner. He declines. He’d love to get to know Allie but right now, he’s getting Harrison ready to go back to Milan. Jack worries. Kyle says he needs to get home to see Summer and talk things over. They’ll return soon for a future visit.

Michael arrives at Grand Phoenix and sees Diane sitting next to him. He glances at her and seems confused and then his eyes are on her again for a longer look. “No, no,” he says, with a shake of his head.

Diane laughs. “You were dead.” He puts his head in his hands. Diane explains she’s not dead. She came back to make amends. “Because people here  are so forgiving,” he drawls. Diane says she’s mentally and physically exhausted and invites him to call her a “crazy bitch,” or “evil incarnate.”

She tells him if he hauls an insult at her, she can then finish her drink in peace. Michael admits, “Actually, it’s pretty good to see you.” She grins and wonders if it’s because Genoa City needs a new punching bag. “At least you have two kidneys,” he says. He’s glad she isn’t dead. She’ll take that as a win. They clink glasses as Phyllis steps out of the elevator and stares.

At home, Tessa and Mariah talk about the wedding planning that will keep Sharon busy. Tessa tells Mariah she can’t wait to be  her wife. “I can’t wait to be your wife,” Mariah tells her bride-to-be. They kiss.

At her suite, Chelsea thinks of Rey and their bond. “It was a bond. Stronger than friendship.” She feels guilty saying that. “Who knows if it would have developed into something more.”

She would have felt bad about that because Sharon is a good woman who truly loved him. Chelsea knows she put her through enough pain.

None of it matters because Rey’s gone and she can’t help that she feels angry and sad at her own loss. A potential future with a man she could have loved. Her happiness was ripped away. She sobs and wonders when she gets a win.

At home, Sharon looks at a photo of her and Rey and holds it close to her heart.