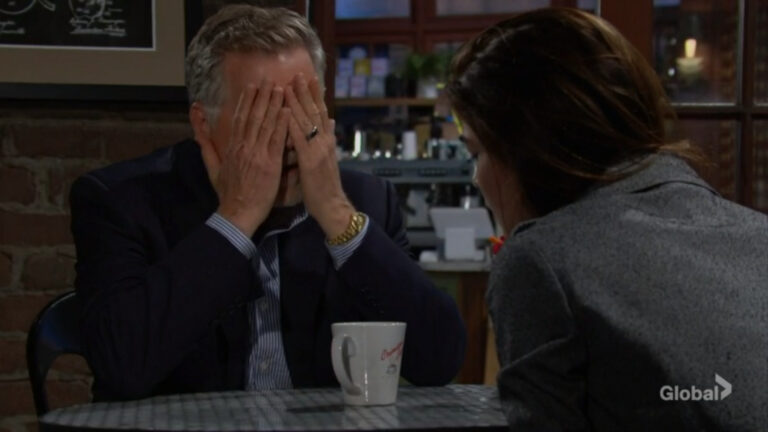 In this episode of CBS’ The Young and the Restless, Michael surprises the family with some good news, Locke refuses to tell Victoria what his next plan is, and Nick appeals to Adam not to go back to his old ways. In the previous episode, Ashland snooped in Adam’s office as Adam and Victor were called to Victoria’s.

Ashland lets himself into Adam’s office. He puts on gloves and locks the door as he looks through his computer.

In her office, Adam assumes Victoria has a plan. She says they need to make Ashland believe in them. One of them has to fall. Victoria tells her family that they can make it look like Adam set Ashland up.

He’s got a long history of deception, including his own medical issue. Adam calls it throwing him under the bus. He’s not happy.

Nikki purses her lips as everyone stares when Adam thinks there’s only something in it for her, “our fearless leader.”

Vicky calls it for appearances sake. She reminds him of her being arrested because of him. She and Nick thinks Adam owes her. Michael wanders in, happily.

He’s found the answer to their problem. There’s an obscure morals clause that buys them grounds to nullify Ashland’s contract.

Victoria’s thankful. Adam and Victor argue about whether or not he should stay on as CEO. Vicky reminds him this was only temporary but Adam needs to fall from grace from somewhere.

She can tell Locke that Victor insisted.

When the proof comes out, she can have Dad fire him. Adam hears a noise on his cell. “Well, what do you know? Someone is trying to break into my computer as we speak.”

She’ll tell him that it’s a way to keep an eye on Adam, which will cause him to become obsessed about Adam setting him up. Adam lets Ashland into his computer, remotely.

Nikki’s more worried about the stress her daughter is under. Victoria can handle it.

Adam knows her husband is shrewd. He’ll trip up but until then, she shouldn’t underestimate him. He goes and Victor and Nick thank Michael.

Michael calls what Ashland did outrageous, before he takes off. Victoria’s interested to see how much Ashland shares with her about his findings on her brother’s computer.

She has doubts that Adam is trustworthy. He’s got a taste of that power again. Victor won’t let it happen. She has his support.

Victoria talks about her devastation over this whole ordeal, feeling shame and hurt, as well as anger. Nikki holds her as she cries. She leaves and Nikki bitches about Victoria going through all of this.

Victor calls her strong. She knows but she still hates that it’s come to this. She can’t wait until Locke is removed from their lives.

Billy sits at home and talks into his voice recorder about Victoria and Ashland’s situation. He mentions having an image in their heads about their ideal partner.

Even when there’s irrefutable evidence to tell them that the person isn’t who they think they are, they can’t seem to see it.

Lily comes down the stairs as he ponders if one should tel another when they’re with a person who isn’t good for them. Are they obligated to say something?

He sees Lily and she apologizes for interrupting. She can see he’s concerned about not doing enough to help Victoria. He’s not sure he’ll use this for a podcast but he is worried about her.

Lily in turn, worries about him. They talk about what Locke did to Victoria and Lily says she’s glad he was there to listen. He doesn’t get why she didn’t kick him to the curb.

She knows he doesn’t have residual feelings for Victoria and thinks he should consider doing a podcast or something that will make him feel as though he’s helping.

He thanks her for understanding and they kiss.

Back at Adam’s office, Ashland breaks into the computer. “Finally,” he whispers. “Let’s see what we’ve got.” He takes some photos and Sally knocks.

She calls Adam’s name and tries the door. Ashland looks frazzled. Adam walks up and she asks why his door is locked.

Adam mouths that she should go along with what he’s about to say and then asks her out for a drink. They leave and Ashland lets himself out, quietly.

At Society, Adam details to Sally that he’s being used as bait in Victoria’s plan to take down Ashland. He tells her Ashland was inside his office, hacking into his computer. “I gave him access, remotely,” he admits.

“In real time as Dad, Victoria, Nick and Nikki all watched.” He set it up so he could also secure his future. Sally admires what he did.

Nick turns up wanting to talk. Adam tells him that Sally knows everything that’s going on. No need to hold back.

Nick gripes that he’s not sure he trusts his brother. He needs to know he’s serious about this. Adam’s sorry for Victoria, but she made her own bed.

Consequences can have lasting effects on them all. Nick has issues in thinking that Adam only thinks about himself or how he can come out ahead. Adam calls himself the family scapegoat.

Does Nick think he’s capable of screwing the whole family over? “There’s not a doubt in my mind,” he says. Even though he knows Adam’s changed. He details the many ways that Adam has changed such as giving Faith a kidney. He wants that man to be the one to take a look at the bigger picture, for the sake of his family.

Ashland sees Michael at Crimson Lights and asks how his trip went. Michael calls it very productive, until he was thrown in jail. Ash thinks he must have pissed off the locals.

“Sure pissed someone off,” Michael says, making it obvious he’s talking about him. Locke plans on proving he’s done nothing wrong. Michael snipes that he’s dying to see how this turns out. He goes.

Victoria meets Ashland and tells him that she let her family in on the smear campaign. She says that Victor is keeping Adam on as CEO. Ash puts his head in his hands.

He’s not happy. Victoria pushed back but then realizes they can use it to show he’s the one targeting Ashland all along. She lies that exposing Adam is all she cares about.

She promises not to back down or let her family change her mind. She asks about their next step. He has one but hasn’t zeroed in on it yet.

She still wants in on it but he tells her it’s not a trust thing. He needs to let an idea percolate. She gets it.

In LA, Jack asks Allie if he’s pushing too hard to be her grandfather.
“No, it’s not that,” she says. “There’s something I think you should know.”

Tessa and Mariah gather Nick and Sharon together. Mariah says, “So the wedding date is May 13th.”
Sharon says, “Of 2023?”
Tessa says, “We’re talking May, as in next month.”

Adam meets Ash at Crimson Lights and tells him, “Walk away from Victoria and Newman-Locke.”