Home » Young and Restless » Y&R Recaps » Mariah Calls Abby Irresponsible for Leaving Town Without Dominic, While Word Gets Around That Abby’s Missing — & Phyllis Flashes to Telling Jack She Loves Him

Mariah Calls Abby Irresponsible for Leaving Town Without Dominic, While Word Gets Around That Abby’s Missing — & Phyllis Flashes to Telling Jack She Loves Him 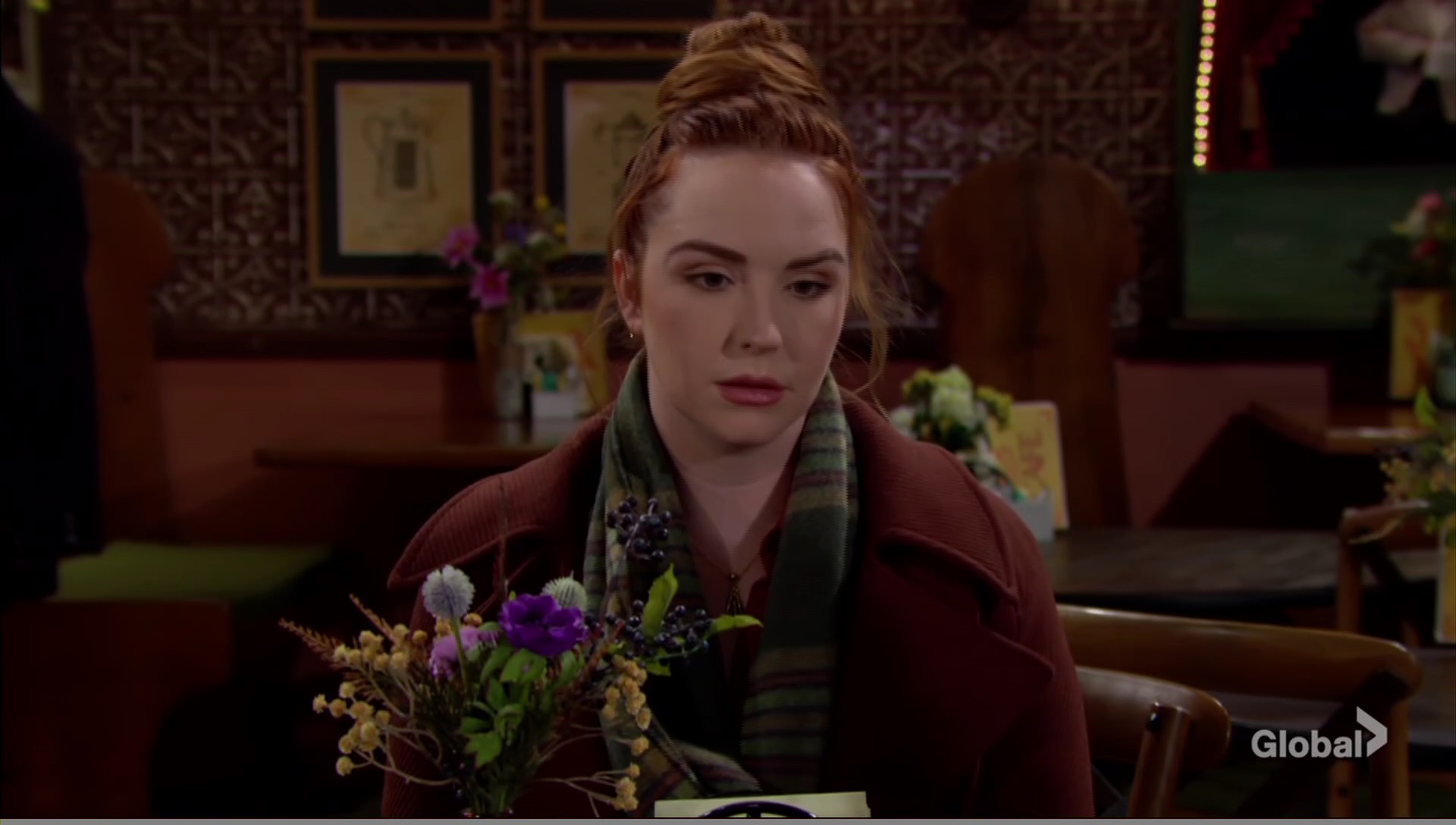 Soaps Spoilers has the Canadian Y&R day ahead recap for Tuesday, November 16, 2021 episode, which airs in the USA Wednesday, November 17. (Recaps live by 5:45 PM EST daily.) In the previous episode, Billy and Lily are dropped Gaines made a big reveal. In this episode of CBS’ The Young and the Restless, Lauren and Michael have coffee together, Phyllis and Nick get into a fight while trying to have breakfast together, and Mariah’s stunned by Abby dropping Dom off with Devon, not her.

At the Chancellor estate, Ashley tells Jack chance is dead. He’s rocked to his core. He becomes emotional. He wishes he knew. Ashley admits he’s just presumed dead but that they found is watch and wedding ring. Jack runs a hand through his hair. Ash is sorry. She knows he loved him. Jack calls this a tragic waste. She thinks Jill would appreciate it he reached out. Mariah wanders in and Jack shares that he just heard the news. Mariah is there to check on Abby.

Ashley says that she left before they woke up. She asks to see the baby but Ashley tells her he’s going to be staying with Devon for a bit.  She’s shocked to hear that Abby left him with Devon. She’s drowning in grief. Mariah’s upset that she wasn’t even in the running to care for the boy after she admitted she was having troubles with attachment. Ashley says that Abby hasn’t mentioned that at all. She and Devon have been besties forever. It was natural for her to go to him. Mariah understands where Abby’s coming from. “Sometimes you need to take a break.” She says she’ll check on Devon before work. Jack will get the news to Billy.

At Devon’s, Devon burps the baby and chants, “Give me a b, give me a u, give me an r, give me a p.” The baby belches and Amanda appears. Devon says the baby’s been calm since he got there. Amanda can see that Abby’s idea to drop him off was the best one. She calls Abby lucky to have a friend like him. Later, Moses meets the baby. He thought he heard a baby crying last night. Devon explains why he’s there. “No offense, but do you even know how to care for a baby?”

Devon laughs and Moses says he has no idea. He thinks the baby has a sweet face and then says he has Devon’s eyes. Devon is surprised. Nobody’s told him that. “Don’t worry. He’s still cute,” Moses says. Mariah drops by. She just heard the news. Devon tells her how well the baby’s doing. He’s cooing, not crying, and Mariah can’t believe his smile. “He’s been like that all morning,” Devon shares. She’s glad he’s out of the stressful environment. She wishes Abby would have come to her. She’d have loved to look after Dom. Devon’s surprised that Abby’s not at home, not at Society and not answering phone calls. He hasn’t heard from her. Dominic makes little noises and they ponder where she could have gone. Devon thinks she left town. Once she’s gone, Ashley turns up. She’s called everywhere and Abby’s nowhere to be found. This isn’t her. “Clearly, she’s not herself.”

Lauren brings Michael a drink and compliments him on how amazing he was in court. “It was truly a masterclass in cross-examination.” She calls him an artist. He’s thankful for the high praise. He jokes about not getting that praise from the opposing lawyer. She barks out a laugh. She hopes not. He loves her laugh. They talk about how fortunate they are to be together and Michael feels bad that Nick and Phyllis are hurting and they can’t help.

Nick walks into Society and sees Phyllis. He looks at her awkwardly and she offers to get a bagel elsewhere. He doesn’t think things need to be uncomfortable. He suggests they face it head-on. He invites her to breakfast with him. Phyllis knows what he’ll order, causing Nick to say, “How did you know that?” Phyllis says he only orders two things on this menu. She tells him this isn’t going to work. When he asks to discuss something else, she asks, “How’s your family?” He knows that is her least favorite topic. She brings up the article Billy let out busting Ashland. Nick says nothing. Phyllis says that Gaines thinks it’s bogus.

Nick’s not sure either way and says he hasn’t spoken with Victoria about it, though things are better between them. He’s staying out of the mess. Phyllis can’t believe it. She’s been telling him to do this for months, yet he now suddenly is doing it. She’s glad she no longer has to walk on eggshells with her, “Because what are you going to do? Break up with  me?” He says that’s not an option. They discuss Summer learning that they broke up and that she took it well. She didn’t give her an ‘I told ya so but Phyllis says, “She was sad.”

Nick takes off and a ‘sad’ song plays as Phyllis holds her head in her hands and Jack walks up, seeing Nick walk past him and Phyllis looking glum. Jack stops by Phyllis’ table. She says she and Nick had a civil breakfast and she doesn’t know why she feels like this. She seems exasperated. Jack sits. He’s in no mood to socialize and tells her about Chance. She already knew and is sorry. They commiserate over the loss. Jack knows she thinks of Abby as a spoiled heiress but they were so happy. Amanda walks up, happy to see them. Jack thanks her for taking Dom into their home. Lauren and Michael poke their heads in and Michael takes Amanda aside to talk about Sutton’s case while Phyllis goes. Micheal tells Amanda that the jury doesn’t like Sutton. She’s glad but knows he’s effective at playing to an audience. At the table, Phyllis doesn’t like that Jack is in Phyllis’ orbit again. Jack says he’s been a confidante and they’ve both grown older and wiser.

At Crimson Lights, Noah sees Tessa and admits he’s getting used to acclimating from being in London so long. He gets a text and seems upset. When she questions him he shrugs it off. It’s unimportant. She talks about putting out her first full-length album. He congratulates her. She asks him to design the cover. He’s flattered but balks. She tells him Devon will be fine with it. He’s used to having total creative control. He says he finished working for his father and isn’t sure if the experience will be much better.

She asks if he’ll listen to the album before he makes a decision. He agrees. Mariah turns up and tells them about the baby staying with Devon and the reason behind it. Noah feels so bad for Abby. Mariah’s upset because they didn’t ask her to care for him. Nobody trusts her anymore. Tessa thinks she was being sensitive. Mariah can’t believe she left town without him. “You can’t just do that with a child, you know?” What if there’s an emergency. Tessa tries to get her to take a few deep breaths. It’s been a few hours. There’s no real emergency. Tessa gets it. Mariah knows everyone handles grief differently but thinks, “Isn’t it a little irresponsible?”

At the Grand Phoenix elevators, Phyllis thinks back to Amanda telling her Jack may be someone she never fully got over. She flashes to telling Jack she loves him and that he’ll always be in her heart.

Nick drops by Devon’s for a meeting. Devon forgot. They discuss that Abby’s dropped the kid off there and now she’s gone missing. “We gotta find her,” Nick says, vehemently.

Ashley arrives at the Chancellor estate and calls for Abby but there is no answer. She calls and leaves a message.