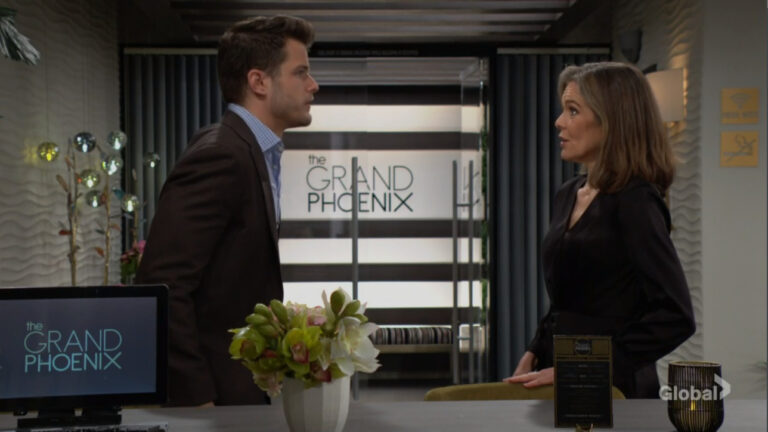 In this episode of CBS’ The Young and the Restless, Allie gets to meet her new family, Diane shocks Nick and Sharon with her presence, and Nate and Elena share some romance. In the previous episode, Victoria confronts Billy about his podcast and Diane’s in the hot seat with the Abbott siblings.

Allie meets the Abbott family at the manse. Allie says he’s the reason “Taylor or Diane” brought them together. Kyle’s sorry that everyone is in an awkward state. “It’s not usually this intense.”

Allie can’t imagine and knows it must be difficult after learning Diane’s alive. She can leave. Jack asks her to stay. Traci admits she’s been looking forward to meeting her.

They all want her to feel welcomed there. Abby can see it’s overwhelming. Allie admits it is, but she’ll stay. She’s introduced to Ash, Traci, Abby and Billy, who calls himself, “The good looking one.”

Traci’s sorry to hear about her father. Ashley calls him a gifted chemist and an amazing human being. Billy says they’ve been through it.

They ask about her school schedule. She decided to take a break. Traci’s glad for them. “Thank you Beth,” Allie says, calling her by the actress’s real name. Traci takes her upstairs and gets her settled as Kyle disappears.

Abby thinks the universe was balanced out. They had to endure the worst person in the world to get to Allie. Ash asks why Billy encouraged Diane. He thinks people can change. Ash is worried about Kyle, but Billy says at the end of the day, this is their nephew’s decision.

Devon and Nate have a meeting at the penthouse. They’re glad they’ve salvaged their relationship.

Lily pokes her head in, glad to hear them talking about forgiveness. “Amen to that,” she says with a smile. Later, they talk about Nate’s great ideas and a media push.

Devon changed his mind. He’s come around to the idea of the party. Devon and Nate question her about how Billy feels about being a non-family member within a family business.

They noticed how distant he was in their last meeting.

Lily’s puzzled. She’s never noticed. Devon asks if he’d prefer to work  for Jabot. She denies it. He’s committed to their company and insists everything’s fine.

Devon has a meeting he needs to get to so they wrap it up.

Elena turns up in scrubs after a 12-hour shift. Nate tells her how gorgeous she looks and the siblings take off, leaving Nate and Elena alone.

He massages her and she reveals nobody’s judging her for dating the Chief of Surgery now that he’s gone. “I just got a burst of energy,” she says, feeling frisky.

She wants to start with a bubble bath. She goes up alone and returns in a robe.  He hands over some wine and they kiss.

At Crimson Lights, Sharon makes a call to ask the church to have the memorial service for Rey there this afternoon. Nick appears. He’s sorry he didn’t stay to help but Sharon’s the one who told him to go see Locke.

Nick doesn’t want to waste time talking about that meeting and asks what else he can do for the memorial. Sharon wants it kept small.

Nick urges her to take someone to Miami with her but she’ll be with Rey’s family. If she changes her mind, he tells her he’ll jump on a plane to be with her. “I would do anything for you,” he admits.

She’s grateful. She goes and Diane wanders up. “Who are you?” He asks. She tells him she’s not a doppelganger. She’s alive and back. Nick’s shocked. He asks what kind of a game she’s playing and where she’s been.

She admits in California and she’s back to make amends with Kyle. Nick doesn’t see that happening but she won’t give up. She tells him she saw the whole family.

Nick’s pissed that his mama was charged with her murder. Diane knows but insists she’s changed. She’s already seen Kyle a few times. Nick didn’t know Kyle was there.

She’s ready to be in his life and Kyle told her he was considering it.

Nick tells him to stay away from his daughter. He’s surprised to hear that his parents know about her and thinks if she was smart, she’d get out of Genoa City. “Is that a threat, Nick?” She wants to know.

He denies that but says they all managed to move on even despite the damage she caused. “You should have stayed gone.” Diane defends herself and then says Kyle’s opinion is the only one that matters.

Sharon appears. She’s in shock. Nick drags her away as Diane says she’s really alive. She heard about her loss and is sorry.

Jack finds Kyle at Grand Phoenix. He’s on his way to see his mom and see how she’s doing after being grilled by the family. Jack can see she’s made an impression on him.

Kyle’s still working through this. He thinks his dad needs to be back at the house with Allie. Jack’s thrilled she’s there. They both hope she sticks around. Jack thinks she’s there for a reason.

When Kyle tells his dad there are things he needs to say to his mother in private, Jack takes off. Diane arrives and finds Kyle sitting at the bar waiting for her. He wanted to see how she was doing.

She thinks the meeting with family was positive and can imagine that the conversation after she left was “colorful.”

He smiles and admits it’s true. She asks where all of this leaves them. “This maybe heard for you to hear,” he says. He came to tell her he’s going back to Milan tonight. Diane’s eyes widen.

Billy wanders in to his old office  with Lily. They’re glad the renovations are over. She notices he’s off. He shares news about Diane being in town. Lily’s stunned at the story about her pleading her case to the Abbotts.

He fills her in and she tells him about Nate’s ideas and how Devon’s open to the launch party. He lets her know that he ran into Victoria, who knows that he’s behind The Grinning Soul.

She’s not happy and thinks he needs to be careful. His story shouldn’t hit close to home. He understands what she’s saying but somehow thinks he’s trying to make an impact on the world.

She thinks he should strive to find a balance to make it more universal. He vows to try harder and kisses her.

Jack returns home to Ashley and Traci. They tell him Billy left and Allie’s in the kitchen with Abby. They’ve hit it off. Ashley had reservations, but she’s really taken a liking to her.

They sensed something was up with his granddaughter and want to leave them alone to work it out. First, Traci says she thinks he should question her. Maybe she feels that she can’t open up.

Maybe she came here for him to lend a shoulder without her having to ask. The women leave and Allie and Abby turn up. Abby gives them alone time and Allie tells Jack she is so happy to meet his family, who have been so kind.

He assures her that they’re happy to get to know her and she breaks into tears and sobs.

Back at home, Billy goes on his podcast and says that his thoughts are from his experience. He knows it won’t always be pretty and at times, will be “downright ugly.”

He’ll change the names to protect the innocent and then says, “Who among us is innocent. I know I’m not.” He’ll be hard on him and harder on those who take advantage and harm others.