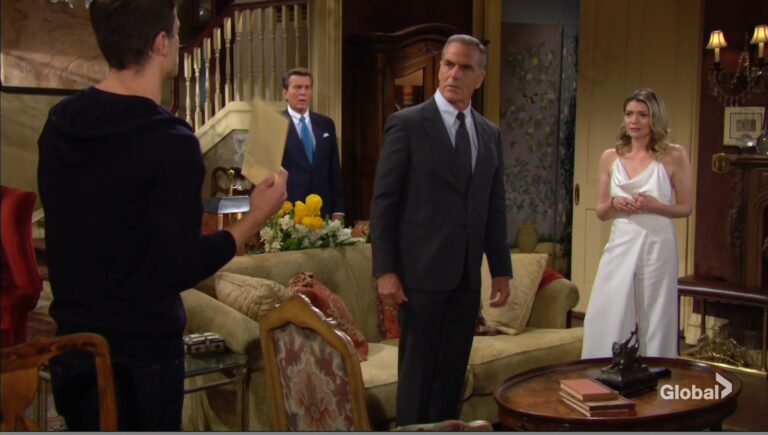 This is the Canadian Y&R day ahead recap from the Friday, May 28, 2021 episode, which airs in the USA Monday, May 31. In the previous episode, Summer postpones the wedding while a paternity test is done to confirm if Harrison’s Kyle’s kid. In today’s episode, Ashland storms the Abbott mansion yelling, Sally schemes, and Victor has a proposal for his sons.

Phyllis visits Summer in her suite. Summer’s feeling down. Everything’s getting to her. Phyllis has been on both ends of the scenario and thinks it’s wise to put the wedding on hold. “It doesn’t feel wise at the moment. It feels like a huge mistake,” she says. It’d be easier to survive this if they were married. Phyllis doesn’t like that Tara floated the idea of moving to GC. “That’s news. Let’s not overreact now,” she says, almost to herself. Phyllis wants her kid to be honest with herself. Summer admits when she sees Kyle with Tara, she wonders if there’s something there that Kyle can’t admit to himself. She’s not sure if it’s insecurity she’s feeling or what. She trusts Kyle. She won’t let this destroy them.

Jack’s happy to find Harrison’s toy on the floor of the Abbott mansion. Tara appears. She was up half the night listening for Harrison. He can tell something is off. The doorbell rings and Tara looks worried. Ashland yells to let him in. Jack alleviates her concerns. Ash vows to get the authorities involved if he has to. Jack lets him in. “Where is my son?” Tara asks him not to take her son from her. He asks why she’d run to her lover’s family home. “Maybe you and Kyle aren’t exes after all?” Jack butts in and Ash doesn’t appreciate that. Kyle appears and tells him they’re supporting Tara. Ashland yells that he has no right to interfere. Ashland reminds her she’s keeping her son from him and he asks to see him. “You know he needs to see me, too.” Tara agrees to it as long as he keeps quiet about their divorce. He won’t mention that, his Mommy’s lies or her affair. Kyle snipes, “Watch it.” They head upstairs to see the kid, while Jack coaches Kyle on when to keep his mouth shut.

Sharon sits with Rey at the coffee shop. He’s thinking of Chelsea. Sharon thinks he should be there but he’ll let the lawyers do their jobs. Sharon hopes Chelsea doesn’t wind up in prison for Connor’s sake. Rey gets a text. Michael says the ruling is in. They’re happy with the outcome. Rey suggests a trip out of town. She suggests Miami, visit Lola while she does her guest chef residency. She likes the idea but they have to take their jobs and kids into consideration. Faith appears. It’s her first day back at school. Everyone will be talking about them because of her organ transplant. She goes and talks to Moses while the parents watch them talk up the tribute for Neil.

Chelsea paces in her room at the psych ward. Michael appears and tells her the judge ruled she was not guilty by reason of insanity. Chelsea doesn’t look happy.

At the club, Crystal in the green dress walks by as Adam and Victor say hello to Nick. They chat about Chelsea for a moment and Victor invites Nick to stay. He wants to enlist Noah to work for them to do a new logo for Newman Media. Nick thinks it’s a big job and since he hates Adam and has been burned before by the family, he may say no. Nick will support his son if he takes the job. Victor’s pleased and asks if they’d like to work on a joint venture at Newman Media and New Hope. Nick wonders what the angle is, and Adam’s all in. Victor would like to put their feud behind them. Nick will consider it. He goes and the other two hear that Chelsea’s going to stay in the psych ward. Victor thinks it’s a good thing.

At Society, Sally leaves a message for Ashland, telling him the new company in  Milan looks good. She’ll start dropping hints for Summer to follow. Summer shows up for a meeting. Lauren wants to meet them both so Sally apologizes for their latest fight. Summer doesn’t believe her but Sally points out that she didn’t know what else to do when Tara showed up. Summer can see she’s scheming. “You have a tell.” She asks what’s up. She tells Summer about the new lucrative job at Marchetti. Summer hopes she gets it. Lauren appears and Summer tells her about the job. Summer goes to take a call and Lauren’s glad they’re putting their past behind them. Meanwhile, Kyle calls Summer with the news that the paternity test results are in. She’ll get there soon. Later, Sally’s alone when she calls her grandmother Sally. She asks how involved Eric Forrester is with Marchetti.

Victor visits Chelsea. She asks if he’s there to throw away the key. She doesn’t trust him. He reminds her she’s still the mother of his grandson and he has a vested interest in Connor’s wellbeing and help for her. She tells him she doesn’t need the help that they dish out in here. Victor calls her mistaken. She’s far more ill than she’s willing to admit to herself. If she submits to therapy, she’ll get out of there. If not, she’ll stay there forever. Chelsea widens her eyes.

Nick goes to Phyllis at the club suite. They fill each other in on what’s going on. Phyllis is suspicious of Adam and Victor’s plans.

Back at the manse, Tara returns and tells the men Ashland is on a call and Harrison’s with the nanny. Harrison asked when they were all going home together and it broke her heart and Ashland’s. He reappears after telling his lawyer to get his son back. Kyle tries to kick him out but they’re far from finished, says Ashland. Someone arrives with the paternity results. Kyle doesn’t open them but tells him that Harrison is not Ashland’s son. “He’s mine.” Ashland looks stonily at Tara.

Michael finds Sharon and Rey at the cafe and is glad to hear that they’re okay with Chelsea being in the psych ward instead of prison. He goes to talk to Lauren, telling her it’s been an interesting day. Michael says Victor visited Chelsea. He wonders why and says the doctor at the hospital was the one Victor brought in. He’s the same one who continued with her care. Michael can’t help but ask, “Is Victor pulling the strings here?”