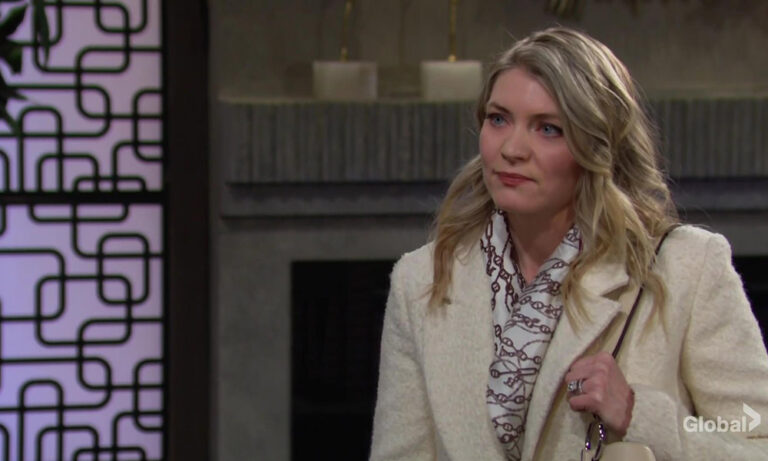 This is the Canadian “day ahead” Y&R episode from the Friday, February 26, 2021 episode, which airs in the USA Monday, March 1.

On today’s day ahead, full episode recap of Young and the Restless, Ashley surprises her daughter, Tara’s exasperated with Kyle, and Amanda means business.

At the Abbott mansion, Abby worries to Nina that the legalities of her procedure will change Devon’s mind. Ashley turns up, surprising Abby. They talk about how wonderful of a friend Devon is. Abby’s stressed and goes over the entire plan. She worries about it since Chance isn’t there and Devon and Mariah might change their minds. Ash tries to soothe her concerns.

Devon and Amanda have breakfast at home until she says she has to meet an important client. Him! They need to discuss legal issues, though he’s disinterested. She doesn’t want him to give up all of his rights. For example, if Abby and Chance move away, he needs to nail down what he wants from them, and what type of relationship he’d like with the child. Devon can see this is personal to Amanda. She’s sorry. It’s a knee-jerk reaction. Their discussion is intense and Abby texts to tell Devon she’s on her way over. She appears moments later to thank him with a gift. Devon’s touched when he sees the photo of him with Katherine she had framed for him. Abby gushes that this is the greatest gift he could give them. Amanda tells them they’re working on legalities to make sure everyone is taken care of. Abby’s grateful. She goes and Amanda’s glad to have been with them just now. She likes their friendship and finds what Devon is doing sexy. He hopes she sends his contract to him in person, suggesting that there’ll be sex in it for her. She grins and promises.

Phyllis tries to rush off when she sees Victor at Crimson Lights. She doesn’t make it and Mumbles asks how Nicholas and Summer are. She says Nick’s fine and assumes Summer’s fine. Victor thinks Summer is hiding something. Phyllis tells him to take a step back but Victor looks after his own. That won’t change. Phyllis goes and Ashley appears. Victor’s happy to see her back from Paris. They discuss Abby moving forward with surrogacy. Ash is terrified about it. Victor knows. If anything goes wrong, it’ll break her heart. Victor says it may go well. He’s already set up a trust fund for the child. Ashley’s pleased.

Summer finds Sally at Jabot and asks her to welcome her home from her successful trip. Sally says Bill didn’t drop the building on her so she agrees, it was a success. Summer calls Bill funny, smart and nice. Sally knows Dollar Bill was on his best behavior. Sally intimates that there’s more to the story about Tara than Kyle’s saying before she leaves the room.

Tara surprises Kyle at the hotel. She tells him she didn’t want him to meet her in New York. They’ve nothing to say to one another. Their affair happened a long time ago. He disagrees. He wants the truth about her son. Is Harrison his? She swears he’s not but Kyle has done the math. Plus, Harrison looks like him. If she proves him wrong, she’ll never hear from him again. Tara complains that Theo’s a scam artist who is playing with the life of an innocent child. Kyle doesn’t want harm to come to the boy. She reminds him Ashland still crushes anyone who comes near him. Kyle’s not deterred. He’ll get a DNA test done if he has to. Tara admits she had a DNA test done and the child is Kyle’s. Kyle is astounded. “I’m a father.” Tara asks him to back off and pretend this conversation never happened. Her three-year-old has had a happy life. Kyle grins. She repeats to leave it alone now and takes off.

Kyle goes to Mariah at Jabot and tells her Harrison’s his. He fills her in on what Tara said. He’s not sure what to do and asks if he should tell Summer the truth. Mariah thinks he should. “Lies have a way of coming to the surface.” Sally appears and Mariah leaves them alone. Kyle asks how the new job is. She’s loving it. He accuses her of being busy climbing that ladder. Sally’s offended, thinking he’s just like Summer. “Success wasn’t fed to me on a silver spoon.” She talks about how genuine Jack has been and that he’s the most honest relationship she’s made in this town. As she rants, Jack walks up and overhears the conversation from outside. He grins. Sally gives them time alone and Jack asks Kyle why he booked the company jet for a NYC trip and then disregarded it.

Mariah, Tessa, and Brittany meet at the coffee house to discuss their adventure. Mariah says her mom is a therapist and thinks this surrogacy might be tough since it’s her first pregnancy. Tessa has concerns too. She worries about how it’ll affect her. How can she not bond with the baby? Mariah is sure she will, but she’ll love the child as an honorary niece or nephew. In fact, she’ll consult with Sharon before, during and after the surrogacy. Brittany says she’ll need to be specific about things like breastfeeding for example. They dive in and discuss. Later, Tessa calls what Mariah’s doing so loving. She wants to think of it as a test run for them. Mariah asks if she’s prepared for hormonal shifts and Tessa certainly is.

Summer winds up at Phoenix and tells her mother she scored a coup at Spencer. She’s miserable though since she let Sally get to her. Phyllis is annoyed. “What did she do?” Summer won’t say but Phylis thinks something needs to be done about her. Phyllis calls her dangerous and needs to be “gotten rid of.” If she loses her job then she’ll leave Genoa City. Summer wants to deal with this on her own. Phyllis claims she knows what she’s doing. “Please, it’s child’s play.” Once Summer’s gone, Phyllis uses her manager card to steal Sally’s laptop. Once she returns, she opens it and checks out the history then calls Lauren to meet.

Abby returns home to Nina. She’s beaming when she says they’re moving forward. Nina grabs the box of donuts and scarfs one down.

Summer pokes her head into Kyle’s office after overhearing that he booked the company jet. She questions why he was going to New York City.