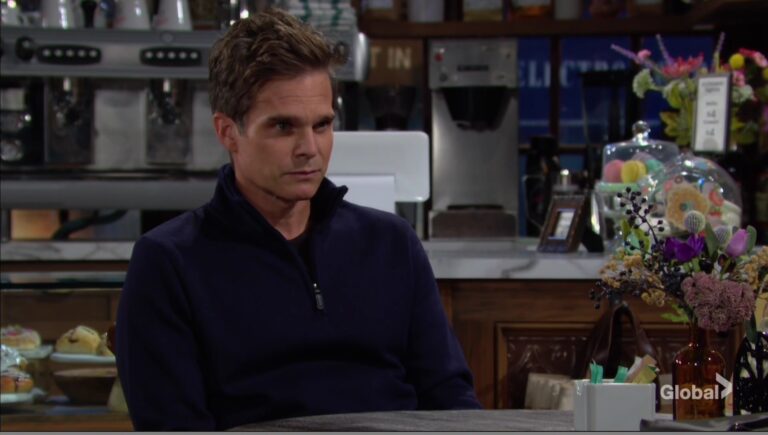 This is the Canadian Y&R day ahead recap from the Wednesday, May 19, 2021 episode, which airs in the USA Thursday, May 20. In the previous episode, Ashland threatened Phyllis and she didn’t bat an eyelash and stood her ground. In today’s episode, Kevin is not happy with Chloe, Rey is asked for forgiveness and Summer breaks down.

Billy rushes Lily to Crimson Lights to see a realtor who will show them a few places. Lily’s shocked at how fast he’s going but Billy wonders why they’d wait. They sit and she is glad that he set this up. Chloe and Kevin arrive and he asks her for the story about Chelsea. Michael told him what happened, but he wants to hear it from her. He reminds her it’s a major crime — did she help Chelsea frame Adam and poison Rey? Chloe admits to running errands for her but didn’t know the poison was involved. Kevin’s livid. Why didn’t she come to him? She didn’t think it was a big deal and doesn’t think she’ll be implicated. Rey appears and Chloe is sorry for what Chelsea did to him. She blames Adam. Rey asks when she figured that out. Kevin doesn’t think it’s cool that Rey is putting Chloe on the spot but Chloe says that there wasn’t much she could have done. Rey asks if she knew that Chelseas was faking paralysis. Chloe denies that.

At Society, Victoria asks why Ashland’s in town. He admits it’s partly to see her father and brother. She heard he was coerced into signing with them. He lies that it was a deal he wanted. He knows they can give his company the attention it deserves. Victoria asks if he is alone and strikes a nerve. She apologizes. He admits he is filing for divorce in the morning. She’s sorry. They agree the focus should be on the kids. He calls them kindred spirits. Lily and Billy arrive and greet Ashland. He takes off and Billy asks, ” Hanging out with Ashland Locke now, huh?” Victoria scoffs but Lily admits they looked cozy. Victoria says she was waiting for Abby but she didn’t make it when she got a call from Chance, so Victoria decided to stay and finish her drink. It was a harmless drink. Billy says if she’s planning a power play on her father behind his back, she can tell them. Victoria gets up and says goodbye. Talk turns to the places they looked at earlier. Billy asks Lily which one of “those places are we gonna call home?” Lily’s excited to get started on figuring that out.

In Kyle’s suite, Tara and Kyle reminisce about people following them when they were together. He calms her down, reminding her that nobody was following them. “You always had a knack for calming me down,” she purrs. Summer lifts her eyebrows. Kyle tells her he’ll do what he can to help her but for now, she can’t be there. He’ll walk her back to her room. They’ll talk on the way. “I’d like that,” she says. They leave Summer, who gets a text from Phyllis asking what’s going on. Summer takes off downstairs to talk to her mama. Phyllis tells her about Ashland’s visit and how he is determined to find his wife and son. Summer says she’s here. She checked in with a fake debit card. Phyllis never would have allowed that. She doesn’t like that Summer is caught up in this. He’s claiming that Tara kidnapped his son. Phyllis asks if the boy is Kyle’s and Summer nods and cries. She’s not sure why she’s so upset. “It’s not like Kyle cheated on me.” Phyllis gets it. She had all these plans and it threw her for a loop. She dries her tears and admits she’s known for a while. Suddenly, Tara wants Kyle to claim custody. Phyllis says, “Nuh uh. No. No.” But Summer says Kyle already agreed to it. Kyle arrives back at the suite and notes Summer’s gone. He looks distressed and notices he has two calls from Jack. and a text offering to talk anytime. Kyle texts that he’s okay and asks to talk in the morning. Downstairs, Ashland appears and apologizes for earlier. He’d like to check in. She tells him they’re booked up so he goes. Phyllis can tell Ashland will make this very ugly for everyone. Doesn’t matter to her. “He doesn’t scare me. Don’t you dare let him scare you,” she tells Summer.

In her room at the psych ward, Chelsea thinks she sees Adam at her door but it’s a guy with her dinner. She wants the doctor. When he appears, she tells him she doesn’t feel safe. He reassures her that she won’t go to jail. She’ll be remanded into his custody and spend her sentence there. She reminds him that her breakdown was an act. He knows but she’s been through a terrible time and is now fearful. Chelsea freaks out about how she thinks Sharon and Adam flaunted their relationship in her face. The doc brings up Rey and Chelsea has an idea. She wants to see him tonight. Dr. Hedges calls Rey.

Nick arrives at Adam’s, surprising his brother. Adam’s doing well and learns that Faith is home. Nick thanks Adam again for saving her life. They watch a baseball game and Nick drinks beer while Adam has water. Adam comments on how weird it is doing this with Nick. They debate on whether the game is interesting or not and Adam shares he likes reading. Nick does too but reminds Adam it’s not a group activity. Adam suggests poker. He’ll teach Nick. “How much cash did you bring?” Nick laughs, remembering that his nickname was Spyder. A knock comes at the door and Adam says, “It’s open.” In walks Victor, who smiles, seeing his sons hanging out. He urges them to do it more often. Nick may find he likes Adam. “Let’s not get carried away,” Nick says. He goes and Adam tells his dad not to get his hopes up. They discuss the company and changing the name. Adam says, “What, you don’t like Cyaxares?” Victor, “I don’t even know what that means!” Adam starts to laugh. Victor can’t wait to crush the competition, ChanceComm.

Related: May 17-21 spoilers for General Hospital

Rey leaves Crimson Lights after he tells Chloe they’ll continue that conversation later. He heads to the psych ward. Once he gets there, Chelsea asks for his forgiveness. He needs an official statement. Chelsea tells him all about how she snapped because of how Adam treated her. Rey asks why she didn’t reach out for help when the walls were closing in. She claims she couldn’t speak, but once she regained the ability to communicate why didn’t she then? Chelsea cries and says it got to the point of no return. “I was broken and lost.” Rey doesn’t look sold on that admission.

Nick arrives at the club and tells Phyllis about his visit with his brother. He asks what’s up with Summer and Kyle. Phyllis asks to discuss it in the morning. Summer asks her to wait. Nick worries Kyle will break her heart again but Phyllis asks him to chill. “Let her make the first move.” Nick nods. Summer goes upstairs and Kyle’s glad to see her. He was worried. She starts to cry. She’s afraid. Scared of where this leaves them. He’s about to co-parent with Tara. Kyle thinks she’s getting ahead of herself. They’ll make all decisions together. He promises.