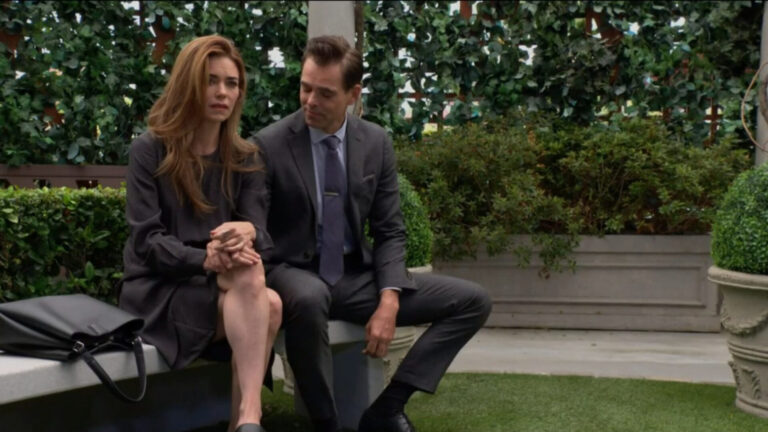 In this episode of CBS’ The Young and the Restless, Billy and Victoria’s decision has them nervous, Jill is happy the IPO is going through, and Chelsea wants to see Johnny. In the previous episode, Phyllis and Diane were rehired, and Nate and Elena didn’t see eye to eye on his espionage plans.

In her office, Victoria tells Nick she’s preoccupied today and needs to run an errand. She suggests he start the meeting without her. He offers to listen and she only says she has to deal with a personal matter with one of the kids that can’t go wrong.

She admits she and Bill are telling Johnny about who his bio mother is. “Wow,” Nick says.

He knows he has to do this with Chrisitan at some point. Victoria admits she’s been putting it off, but Chelsea has been wanting it.

Vicky thinks he’s old enough to know. Nick knows her son adores her. She gets a little emotional. She knows that and prays it’s the right choice.

At Crimson Lights, Chelsea tells Billy she plans on being patient about the timing of when they’ll tell Johnny the truth.

Chelsea can’t contain her excitement that Johnny will know who his bio mom is. She vows not to interfere with anything.

At Society, Nate talks with Audra Charles about the IPO and Jill being a force.

Nate tells her all about who Jill, Lily and Billy are in business. Jill’s less focused on control.

Lily and Billy work well together.  She’s curious about Devon and Nate tells her he’s focused and single-minded.

Back at Crimson Lights, Sally and Chloe work on their meeting. They consolidate their to-do list and decide to go back to the office.

Adam finds them and jokes that they’re planning world domination. “Every morning,” Sally says. He’d never bet against her.

Chloe asks what’s going on. Sally says she’s moved on but they work and live in the same town and they agree they want to remain civil.

Adam is stepping back so doesn’t find a reason for awkwardness. He leaves when it does become awkward.

Chloe’s surprised at the maturity and is proud that Sally’s focusing on herself. Sally says he’s still on her mind but it’s less and less. Nick texts to stop by.

At the office, Devon and Lily jump on a Zoom call with Jill to tell her they decided to take the company public.

Devon admits he needed a lot of convincing but they all want to keep that 51% controlling shares.

Jill has concerns about Nate but Devon says they’ve been put to rest.  He’ll be at the meeting with Billy as well. He’s dealing with a family issue.

Lily thinks he’ll fill her in later. After the meeting, Devon asks what’s up with Billy. He worries his heart isn’t in this.

She assures him Billy’s committed but the family issue is important.

Audra and Nate turn up and introductions are made. She says that Nate sings Devon’s praises and admits they met last night and he took her out for breakfast.

Nate’s excited to learn the IPO is a go.

Audra explains she’s there to walk them through the IPO process from start to finish and offer suggestions. She’ll put something together to get them started and ensure they stay on deadlines with efficiency.

Devon’s impressed. Audra thinks this will be satisfying for them.

Nate nods and thinks it’s the right decision. They hire her. She goes and Devon asks what he thought about her since he met her first.

Nate thinks he’s trying to start something but he’s just curious since he gave her such a good impression. “In that case, thanks,” Nate says.

Back at Newman Media, Sally tells Chloe she’s meeting Nick. Chloe questions Sally’s one-on-one meetings with him. Sally makes light of them. Nick turns up and asks if they can talk. Chloe goes and Nick asks Sally out to dinner. She’ll check her schedule. They make moony eyes at one another. Later, Chelsea finds him and they discuss Johnny being told the truth today. She admits she’s nervous and excited.

In Chancellor Park, Johnny kicks the soccer ball around. Victoria thinks there’s no way to prepare for this. Billy tells her that their son isn’t outgrowing his love for her. Billy talks about having no regrets and calls the kid innocent and sweet.

She cries that he’s the greatest joy of her life and Billy a wonderful father. They’re ready and call the kid over.

There’s something they need to talk to him about.

They ask if he ever thinks about his birth mother. He doesn’t.  Vicky says it’s okay if he does and won’t hurt their feelings.

She thinks it’s time they told him who she is.

Billy tells him she lives there in Genoa City. “You know her,” Vicky says. “Chelsea. Connor’s mom.”

Johnny wraps his brain around it. He saw her at the pool. He asks why they told him when he just said he didn’t want to know.

He asks what’s really going on and if anything will change.

They assure him nothing will change and it was time to know. They didn’t want him to hear it from anyone else.

Others knew. He’s mad that others knew before him. “Now I don’t want to talk about it ever again!” He says before running away.

Back at Newman, Chelsea gets a text from Billy. She’s happy to know that Johnny finally knows who she is.

At Newman Enterprises, Victoria appears and tells Nick that talking to Johny went worse than she expected. Nick thinks he needs time and will make peace with it eventually.

She hopes so but worries she messed her kid up for the rest of his life.

He offers to take him out to play at the batting cages and not discuss it. She appreciates it.

He gets a text from Sally that he’s in and Victoria asks who it is. He says it’s just dinner plans. She takes a call and he goes.

Nate calls to tell her the IPO is official. He asks when to meet to take the next step.

At Crimson Lights, Chelsea finds Billy and asks how Johnny took the news. Was he shocked? Does he want to see her? Billy says they’re not pushing him to change anything because he doesn’t want to.

He doesn’t want his world to change. She hates that it was hard on him.

Billy admits it’s catching him off-guard that she wants to be in his life immediately.

This isn’t what they discussed. It was and should only be what’s best for Johnny and it seems like she wants more.

She just wants Johnny to be okay.

She cries and thanks him before running off.

Adam finds Chelsea upset in the park. They discuss going on a fun trip with Connor.

She bites at him for proposing a family outing to fill a hole in his own life.

She reminds him that she asked to go away with him and he denied her. She just wants to love and take care of her son.

She doesn’t understand why nobody gets that. She toddles off leaving Adam confused.

Tuesday’s Y&R recap: Victoria has a warning for Chelsea