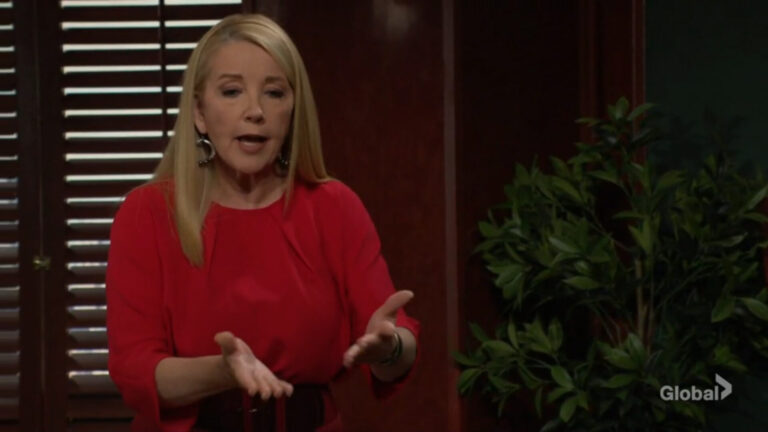 In this episode of CBS’ The Young and the Restless, Victoria fills Nikki in about what Victor did, Sally and Chloe talk business, and Nick confides in Sharon about his situation. In the previous episode, Diane blew up at Kyle, and Chance questioned Nick and Victoria before confronting Victor.

Nikki drops by her daughter’s office at Newman. After Victoria tells her about closing a deal, her mom suggests she celebrate.

Maybe they can go to Society and talk? She brings up the night Ashland died and how Victor keeps dancing around the subject.

“There is a secret, isn’t there? And I think I know what it is,” Nikki guesses. Victoria fills her in on Victor’s men removing the body and crashing the car. Right now, they just need to get through the investigation.

She admits that Chance seems suspicious but doesn’t have much evidence. Nikki realizes the cop is likely interrogating Victor right now and runs off.

At Crimson Lights, Nick tells Sharon that he confessed everything he knows to his sister. It’s not like she hasn’t dealt with something like this before.

But everything is upside-down this time and they need to protect Victor. He fills her in on Chance’s suspicions.

She reminds him he’s had to decide what to do about his shadiness before.

Chance is a lot like Rey. She’s not sure how he is supposed to handle dealing with his wife’s father in this situation.

They rehash everything that happened with JT. Nick doesn’t think his father can help himself or learn from his mistakes.

Sharon thinks he’s having a normal conscientious reaction to what happened. He concedes this. He’s been mad that Locke pushed him too far.

She keeps comparing this to what happened with JT. The attempt to cover it up backfired spectacularly and she hopes that doesn’t happen this time.

She encourages him to take this mind off this and invites him to dinner with the kids. They chat about Noah and Allie.

Nick doesn’t want to be a downer so he’s going to have a jog and watch cartoons.

At the ranch, Chance tells Victor that he thinks someone disposed of Locke to protect Nick and Victoria. “Interesting theory,” he sighs.

The cop tells him there was very little evidence initially. “Wow,” Victor groans.

Chance explains they dug up some more evidence but it only makes Victor laugh. He tells him he has enough evidence and he should stop wasting his time and move on.

The cop says it’s his duty to find the facts. Victor can admire that but his efforts would be more useful elsewhere.

Chance reminds him that he covered up a fatal accident involving his children in the past. Victor says that was decades ago. He’s not saying any more.

“I have nothing to atone for,” Victor assures him. Chance still won’t back off. His father-in-law tells him to go home and remember that Locke is no longer a danger to anyone.

Chance stops by Victoria’s office since he left his phone before. He adds her father “took the fifth.” She tells him he only has a theory and no proof against her father.

She says that her husband was a charming but manipulative man who lost it. He’s not worth the trouble of investigating. The cop explains he’s not doing this for Ashland. He’s trying to live up to Rey’s standards of investigation.

Nikki arrives at the ranch and Victor is surprised to see her. She tells him about her conversation with their daughter.

“Hmm?” he says. She wishes he had told her the truth from the beginning. He agrees and admits that Chance didn’t like the answers he gave him.

That’s not a surprise to her. She wishes they would trust and support each other. He won’t argue with that. Right now, they need to stick together as a family.

Chloe shows up in Sally’s office. Her synapses are firing and she wants to talk about how profitable superheroes can be.

Sally isn’t listening to her because she’s thinking of Adam and all the sex they used to have in the office. Chloe keeps talking about creating video games.

Eventually, Chloe notices her boss is staring into space. She suggests they need to exorcise all the bad juju that Adam has left behind. He’s sapping her energy.

Sally’s not sure she can do this without him. Chloe gives her a pep talk and says she wouldn’t be wasting her time if she didn’t think she couldn’t do this job.

Sally thanks her. She starts making calls to talk about film deals. Chloe commends her on how well that went. Sally thinks they will kick butt.

Now people will turn to Newman Media to figure out what to care about. It’s awesome how much power they can wield.

They talk about expanding their news division and she’s been rethinking their approach to the Locke story. Chloe thinks that’s tricky.

Sally informs her they are no longer on probation. They won’t cut them loose given how much they know about what happened the night Locke died.

Chloe hopes she didn’t threaten the Newmans. Sally says they are just grateful for their discretion. Someone will investigate this story so they should have a sympathetic story to put out there when they do.

She asks Chloe to prod Kevin for details about the investigation. Chloe is reluctant to cause problems for her husband. She was engaged to Chance long ago… but he wouldn’t leak to her.

Sally is sure there must be some other way to find the missing pieces in the puzzle.

Adam wanders into Society and chats with Jack at a table.

He wonders if the Newman is thinking about the future. If he’s not, he must be stewing and that never leads anywhere good.

When Adam sits down, he admits he’s feeling bitter and he’s mad at himself. He’s kicking himself for not seeing the latest disaster coming.

Jack wonders if his optimism was due to Sally. Adam admits he may have got caught up in her unrealistic expectations. Part of him wonders if he keeps masochistically throwing himself into situations like this to punish himself for what he did as a child.

Jack suggests he’s not looking for forgiveness but for a way to forgive.

Adam knows that letting go of his rage would be therapeutic but his father is in his head as his enemy. This is very familiar to Jack, but he learned to let that go and channel himself into something positive.

The Newman feels like he’s spent his whole life reinventing himself and lists his many different personas over the years. Jack urges him to find a way to prove himself to the world.

“Come work with me at Jabot,” he suggests. Adam assumes he’s kidding but he’s not.

Jack gives him a pitch but Adam is wary of family companies. He reminds him that Summer has taken refuge at a different company to get away from the Newmans.

Besides, they just hired Diane and everyone hates her even more than him.

Jack won’t push for an immediate decision. It means a lot to Adam that he would make him this offer and he will give it some thought.

Billy strolls over and starts bickering with Adam, who walks off.

Billy wonders what his brother just did and is perplexed when Jack explains he offered Adam a job. He thinks he could use a fresh start but Billy doesn’t think he can be trusted.

Jack is giving him a lifeline when he needs it. Billy thinks he’s making a huge mistake.

When Adam gets to Crimson Lights, he finds the door locked. Looking through the window, he sees Sharon speaking to Nick