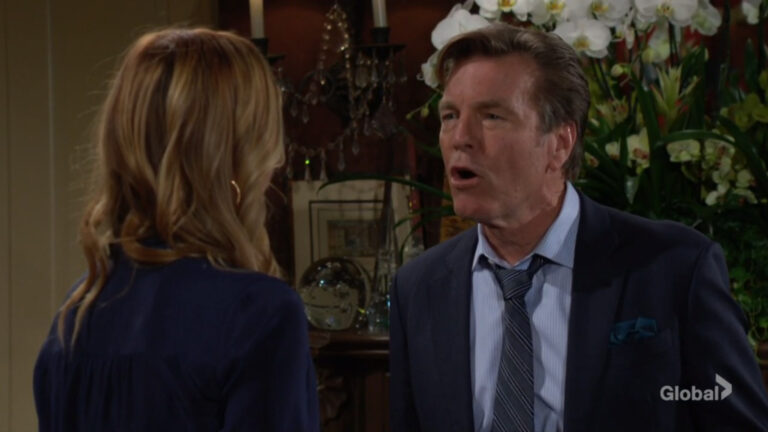 In this episode of CBS’ The Young and the Restless, Ashland and Victoria chatted about their future, Jack told Phyllis they were done, and Victor was surprised to learn Nikki slapped Diane. In the previous episode, Amanda gives Phyllis tough love, and Noah and Allie chatted about Billy’s Manpain Monologues.

At Newman, Victoria asks her father what he’s done about Ashland. Vic plays coy. He calls the man desperate. Victoria thinks he was likely provoked. Nikki gets between them and Vic turns talk to Switzerland which Nikki calls green.

Meanwhile, Victoria gets a text from Ashland who says he’ll never stop loving her. She lies about who it was and they invite her to sleep over. She scoffs at that. She can spend a night at home alone.

They invite her to dinner but she’s off for home. Once she’s out the door, her parents admit they didn’t believe a word Vicky said.

Jack broods alone at home. Phyllis arrives and he refuses to let her in. She pushes. They’ve come so far and it’d be foolish to let this cause everything to fall apart. He relents and lets her in.

She apologizes, though it doesn’t come easy to her. She’s sorry for what she said and did and for the aftermath with Diane. She takes full responsibility. She admits Diane has a permanent space in her head.

She felt threatened. Jack calls it absurd. She knows. She continues to apologize profusely. She wanted to get him before Diane got her hooks into him. She tears up. She’s done so well and has matured and feels like she just backslid. He agrees and says it happened so fast.

She thinks he can get past this.

He tells her it was the ease and how fast she transformed into Phyllis of old. She knows and again apologizes. “I can change,” she says. She’ll be a better person for him. He can’t do this all over again.

He reminds her that he’d almost rather die than be hurt. She threw out their trust to get an edge on Diane. He tells her she can’t change.  He can’t do this. “I’m done.”

She asks if it’s the end and he says it is. “Goodbye.” Diane, Summer and Kyle wander in, laughing. It’s uncomfortable. Jack lies that he has to make a call and leaves his phone behind.

Summer questions her mom who lies that they were going to go to dinner and dancing but something came up. She takes off and Diane looks smug. Kyle runs after his dad and Summer assumes more went on than a business call.

She stares at Diane who has no idea. Summer goes to check on her mom.

From his room, Ashland calls downstairs to see if he can get checked out. He’s nasty as they ask if he’s enjoyed his time in Genoa City and says he hasn’t. Victoria arrives. He’s surprised she’s home.

He says he’s getting out of “this godforsaken town.” This doesn’t sound like him. Locke just can’t fight anymore. He’s letting the Newmans win. Vic asks what happened to make him want to leave.

Ashland’s surprised she doesn’t know. He’s relieved. He didn’t want to believe she’d be a party to this. She’s baffled so he lays it out about the restraining order. Victoria’s surprised Victor is behind that.

Ashland says it’s got his name written all over it. He doesn’t believe anything he’s done warrants this but Michael Baldwin and some judge signed off on it. He tells his wife that she made him a better man.

He’ll be forever grateful for their happy times. Aside from Harrison, he calls her the only bright spot in his life. She asks why she should believe him. He starts bawling and says he’ll make it up to her with charities.

He’d do anything. Give up anything. For her. “I would walk through fire for you.” She reminds him he has. He laughs. He’s better off without her. She starts crying. She wants him to stay. She was going to say goodbye but she can’t bear to.

He gets it. She cries that she can’t erase her love for him. They’ll find a way. He moves to kiss her and she pulls back. He apologizes. She wants to take it slow so she can be sure they’re doing things for the right reason. She needs time to rebuild trust. He’s willing to wait. She’s glad because she doesn’t want to lose him again.

Nikki and Victor dine  at Society. She admits that Vicky didn’t discuss Ashland the entire time, though she admitted before the trip that she still had feelings for the man. If anything, Nikki thinks she’s more into him.

Victor wonders how “that bastard” has a hold on her. He admits he convinced Kyle and Summer to set up a restraining order against Locke. Nikki hopes it’ll work but she hates using the boy as a pawn.

Victor denies that was what he did. They see Diane walk in with Kyle and Nikki’s annoyed. She already slapped her once. Victor’s rocked. She says she’ll tell him in the car. They leave and on the way out, they say hello to Kyle and ignore Diane.

Diane explains that Nikki slapped her last time they met. Kyle’s rocked. Diane thinks most would say she earned it. Kyle’s sorry. It must be hard being in town.

Summer finds Phyllis at Grand Phoenix. She knows her mom is pretending to work. She asks what’s going on. Phyllis tells her daughter to get Kyle to send Diane packing or she’ll ruin their lives forever.

Traci arrives home and can see Jack’s a mess. He admits he and Phyllis were doing this slow romantic dance together that shaped his days. When it was almost perfect, she broke it. She ruined it all.

Traci’s sorry. He says it’s over. He can’t believe he’s here again. It’s over for good. Traci hugs her brother. He tells her he’ll never be in this position again. Traci knows he’s a romantic and it hurts when love goes wrong. Tomorrow he can spin it positively but tonight it’s okay to feel bad. They hold hands and he tears up.

Summer interrupts Diane and Kyle at Society. Diane calls it a night and Summer tells her husband her mama is headed for a breakdown because of Diane. They need to do something. She gets an idea.

In her room, Phyllis finds a drink from the mini bar and Daniel calls. She misses him so much. She tells him she should call more often.