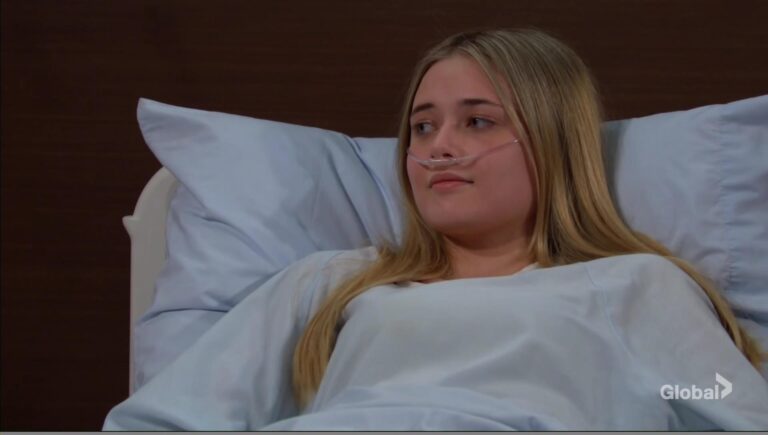 Canadian Y&R day ahead recap from the Wednesday, April 28, 2021 episode, which airs in the USA Thursday, April 29. Monday’s episode had Faith passes out at Crimson Lights over Cyaxares. On today’s episode, Faith goes into the hospital, Nick and Sharon fight over Adam, Victor is at odds with Rey, and Sally wants to talk to Jack about their relationship.

At Jabot, Sally worries that Jack has heard her profess her love for him to Summer. Jack claims he just got there. When she asks him out to talk, he’s reluctant but agrees to it. When she goes, Summer tells him he’s too kind-hearted for his own good. Later, Kyle appears with the contract from Ashland. He sweetened the deal and even kicked in “a little something” for what happened with the factories. Jack wants Legal to go over it. He’s proud of his son who was willing to walk away from Jabot over this. One day he’ll have a son of his own and he’ll understand. Later, they talk to the Brash and Sassy warehouse and learn they’re back up and running. Summer arrives and they tell her they’re taking this good news for what it’s worth. Much later, Sally and Jack have left and Summer tells Kyle that Jack and Summer are meeting later. He’s not worried. As far as Sally, his eyes have been opened. Summer moves to worry about his potential deal with Locke. Kyle hopes it works out. They haven’t had time to breathe lately and spend time together. She wants to announce their engagement. After some convincing, he agrees. She wants a big wedding this time. The theme?  “Unforgettable.” Kyle smiles and says, “Oh ho ho.” He loves the idea.

At Society, Rey tells Lola he ran into Victor and is having a bad night. She asks if he’s spoken to Sharon. He has tried, he admits he did but Adam called and ruined it. He leaves and finds Victor on a call looking for Adam. Rey realizes he really doesn’t know where Adam is. Victor says Rey’s getting on his nerves. Rey admits Adam called Sharon yesterday. Victor can see he’s upset that Adam still trusts Sharon. As they talk, Victor realizes that Rey seems to doubt that Adam tried to poison him. Rey tries to steer him away from those thoughts and Victor shrugs. Then he’s motivated by jealousy.

At Crimson Lights, Nick gets Elena to look after Faith once she regains consciousness. Faith is tired and feverish. Elena worries and gives her water. Sharon worries it’s thallium poisoning but Elena refuses to guess. They take off for the hospital.

Back at Society, Victor gets a call from Nikki that Faith’s going into the hospital. Since he has a meeting, she asks him not to cancel. She’ll keep him posted. Victor refuses to tell Rey anything when he asks what’s up with Faith. “That is none of your business.”

Back at Crimson Lights, Moses can’t find Faith. He texts her to see if she’s on her way. Sally finds Tara and hopes Ashland’s doing well. Tara says the doctors are optimistic. She can’t wait to get him home. Jack texts that he’ll see her now. Sally asks Tara to distract her husband so he won’t go after her friends. She begs her pardon. Later, Moses gets a text back from Nikki about Faith’s illness. He rushes out. Meanwhile, Tara’s about to go until Sally turns her around to blast her about how Ashland punished Jabot. Tara doesn’t get it. Does she even work for Jabot? Sally doesn’t, so Tara says, “I have no idea what any of your saying means.” Sally goes on about how kind and decent Jack is but warns that he’ll do what he can to protect his family and employees. Tara looks to the left and sees Jack eavesdropping. Sally looks down as though she didn’t expect him to catch her. Jack greets Tara. He learned that Ashland’s heart attack has given him a new perspective. Jack’s happy that he’s had a realignment of his priorities. She’ll pass that on and takes off to the hospital. When she’s gone, Jack admits he overheard what she said. Sally thinks she got carried away with Tara but she has his back whether they’re together or not. Jack’s appreciative. Sally thinks this proves he can trust her. She may make mistakes but she has a heart. “I have…deep feelings for you,” she admits. Deeper than he could know. Jack looks at her, mouth open…

At the hospital, Sharon is in shock that they’re back there. She becomes emotional that she’s been there for her children too often. “I hate it here.” Nick bitches that this could be caused by Adam since she was at home after the accident. Nikki and Sharon ask him to relax and stop trying to implicate him when they know nothing yet. Nick blames Adam for Faith being bullied, which shocks Sharon. Nikki comes between them, telling them to stop it. Adam has nothing to do with Faith’s bullying! Sharon agrees. Nikki tells them to stay strong. Nick promises to stay on track. Victoria calls and Nikki updates her on the situation while Nick says, “You’d think it’d be embarrassing being scolded by his mother at my age.” He apologizes for bringing up Adam. Sharon says it’s okay. Nate appears. Faith has an infection and her immune system is attacking her kidneys. Her kidneys are failing. Her body’s reaction to the issue is the real problem and they’re trying to come up with solutions. He gets a text and learns they’re going to do a renal biopsy procedure. In Faith’s room, Elena and Nikki discuss the meeting with the specialist. Faith seems concerned but is comfortable. Nikki tries to reassure her but she wants to know what’s wrong with her. Elena claims they’re trying to figure that out. Nikki goes to call Victor and Sharon and Nick appear to tell Faith what’s going on exactly. Nick says they’re working on a treatment plan now. In the hall, Moses sees Nate who asks if he can visit faith. Nate tells him it’s a bad time. Moses wants to hang out. He’ll even clock in for volunteer hours. He goes and Nick reappears asking what he has learned. Nate shares that they can do dialasys. Nick’s shocked. It’ll be three times a week forever if they need to do this. Nick’s voice breaks. Nate says otherwise, they can do a kidney transplant. Nick does some deep breathing and looks upset. Nate says the waitlist could be 10-12 years unless they find a close relative with a compatible blood type who can donate a live kidney. Since Faith has a rare blood type, finding a donor could be a challenge, Nate reveals.