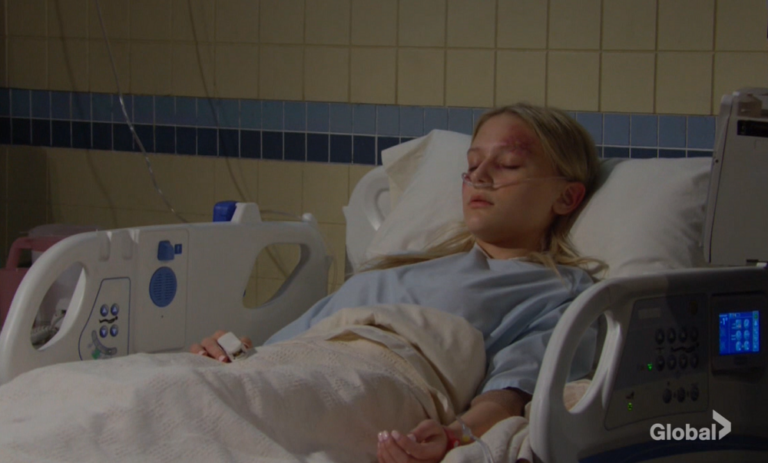 This is the Canadian “day ahead” Y&R episode from the Monday, March 29, 2021 episode, which airs in the USA Tuesday, March 30. On today’s day ahead, full episode recap of Young and the Restless, Jack learns the truth about Kyle and Tara, Faith is in the hospital, and Summer thanks her mother.

As Sharon and Nick drive around looking for Faith, they lose reception on the app. Nate calls and tells Sharon to get to the hospital Faith’s been in a car accident.

At the hospital, Faith’s in a bed, unconscious. Sharon and Nick rush in and talk to her, telling her how much she’s loved. Nate appears. He says in addition to facial lacerations, she has bruising on her kidneys and cracked ribs. Her blood alcohol confirmed she was drinking. She also wasn’t drinking and the vehicle she drove didn’t have airbags. Nick asks who found her. It was a man who disappeared after he gave her to a doctor. Sharon cries over Faith and apologizes for not listening to her about her problems at school. She knows she has work to do. Later, Nick sits with his daughter and tells her they’re there for her. They need to know who brought her in and will never rest until they find him. Meanwhile, Adam’s in some room, watching the news about Faith.

Billy groans and makes noises in his throat. “What’s with all the dramatics?” Lily heard Locke is selling his business to Adam and Victor. She asks how many times he’s read it. “Five times,” he admits. She tells him to stop. They can’t change it. Billy can’t let it go and broods.

Summer goes to the club to thank Phyllis for biting her tongue when it comes to Sally. “My lips are sealed,” she says as Green Dress walks by. Phyllis still thinks it’d be nice if Sally lived elsewhere.

In Jack’s office, Kyle tells his father that he had an affair with Tara Locke. He met her at a party and they sparked. He admits he knew she was married. They were careful.  Jack demands details and Kyle provides them. Jack is concerned since Locke called him and is returning to Genoa City that there will be repercussions. Jack tells his son that Ashland suspected his best friend and partner was cheating him and he crushed him — publically. He’ll do the same to Kyle. Kyle worries since Tara’s concerned that Ashland suspected something. Kyle vows to keep this from blowing up. The last thing he wants is his poor decisions hurting his dad or Jabot. Jack will handle things going forth but Kyle wants to do this on his own. Jack refuses. When Summer shows up, they rehash how she came to find out about the affair. They leave out that Harrison’s his kid…

At Chelsea’s, she and Chloe discuss how Chelsea now knows Adam will never change. She knew he’d never leave Genoa City. Chloe doesn’t get how she pulled this off. Chelsea reluctantly tells her she picked up the package of thallium, unknowingly. She hid it before Adam came home. Chloe thought she was retrieving medical supplies. Chloe’s shocked and doesn’t want to hear more.

Lily and Billy appear at Grand Phoenix, asking for a couples massage. Phyllis rolls her eyes and says Alphonse is available. She calls Billy a lucky guy and he nods. He takes Lily aside and doesn’t think this will preoccupy him. They head to their suite and Alphonse works his magic and goes. Billy has so much energy now. They want to “take this to the next level,” so Lily shows him her nude body under the towel. Downstairs, Phyllis is kind to Sally, who wonders what she’s up to. Jack walks in as Sally’s making accusations. He and his lady take off for Society and Phyllis points at the door and says, “No.” She looks up Wyatt Spencer’s number. “It’s time we had a little chat.”