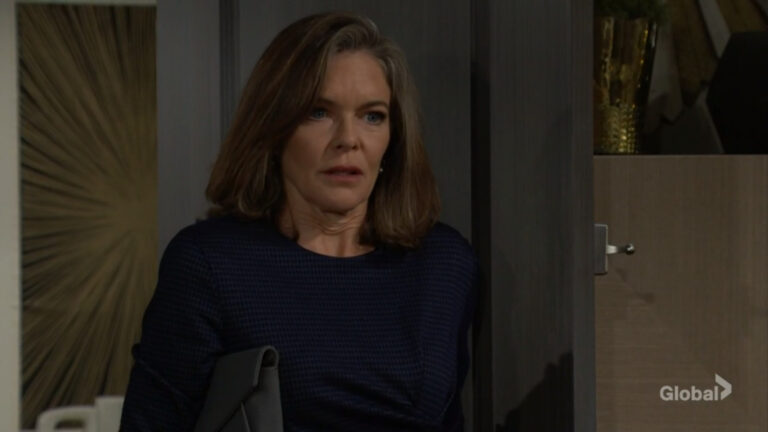 In this episode of CBS’ The Young and the Restless, Victor gives Chance some advice, Jack wonders if Diane has changed, and Kyle listens to his mother. In the previous episode, Adam confessed he’s falling for Sally and Kyle met with Diane.

Phyllis joins Jack at Crimson Lights. He can’t stop wondering how things are going between his son and Diane. Phyllis understands he wants to protect his son.

Jack is worried he’s made a mistake in facilitating this and Kyle will pay the price. Diane can talk her way out of a sunburn so his son is certainly in a vulnerable position. Phyllis reminds him he can only do so much.

Jack thanks her for giving him perspective again and again. She jokes that she’s always mature and has her feet on the ground. She asks how he will react if Kyle is sympathetic to his mother.

He will advise his son to think long and hard about letting someone like Diane into his life but will have to respect his decision. Phyllis says Summer will have lots to say about that if it’s what happens.

Jack wonders if they should be giving Diane the benefit of a doubt. Maybe Diane really has managed to chance?

“Hell no!” Phyllis insists. He reminds her that his mother deserted all three of her children and did terrible things. But she came back late in her life and they were able to reconcile.

He valued that connection. Even if it seems absurd in Diane’s case, he hopes it could be true for his child too. Phyllis points out that Diane is still being cryptic and duplicitous and rants about how manipulative she has been with Allie.

Jack is not convinced by Diane and not grateful to her, but he still thinks she may have reformed somehow. Phyllis gets that he is aching inside but to believe that Diane is less of a sociopath is beyond her realm of understanding. 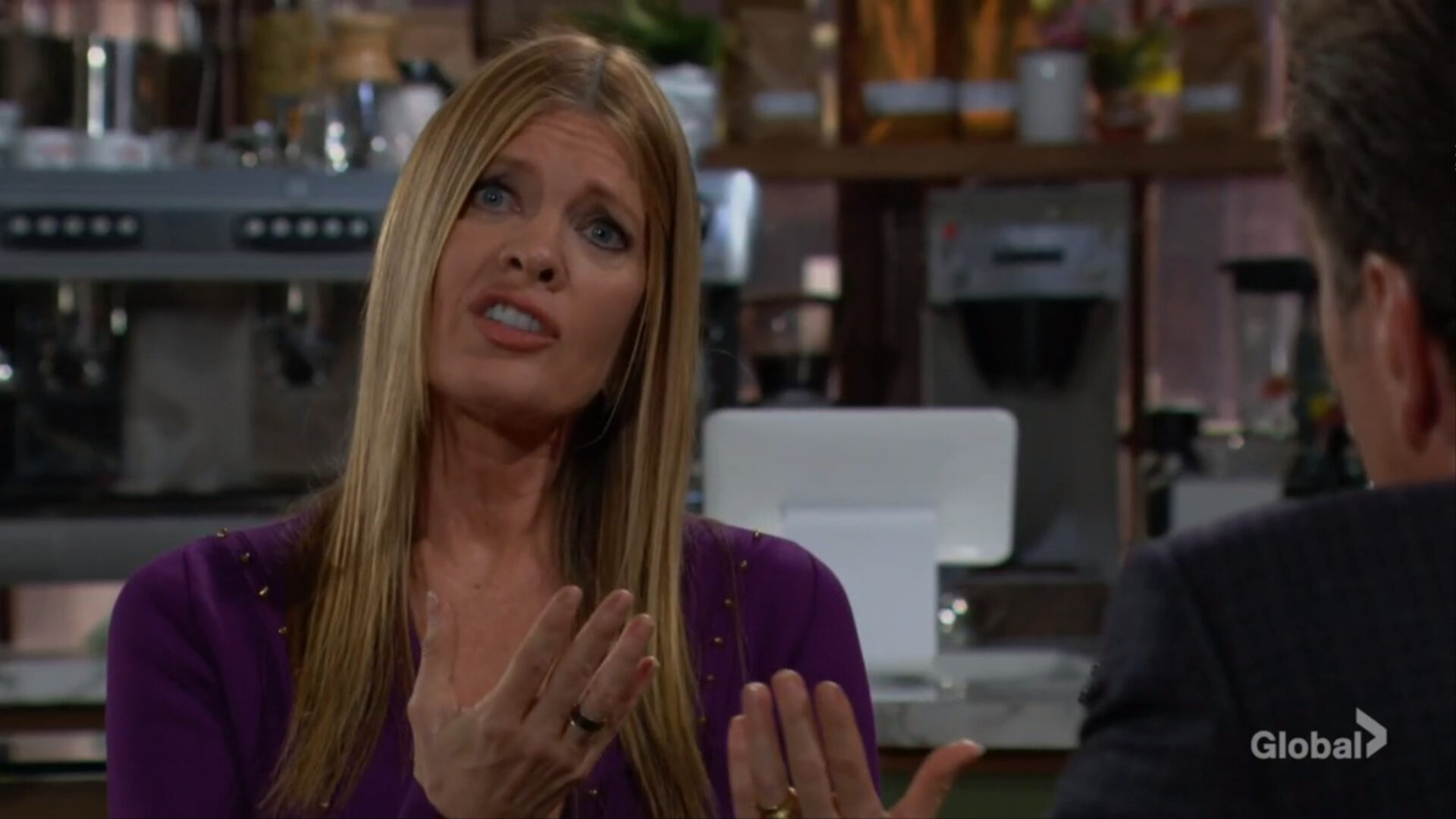 Jack points out some people would say the same thing about her. She points out that she never faked her death and framed someone for it. She has not seen an iota of change.

“You’re absolutely right,” he tells her, assuring her he won’t let his guard down.

At the Abbott estate, Kyle is shocked to open to the door to his whimpering mother. Diane thanks him for agreeing to meet with her so she can explain herself.

“You’ve got a hell of a lot of explaining to do,” he says.

When she steps in, she says the house is full of memories. He has a million questions. She’s sure he’s confused and angry. He’s all that and more.

His mom hopes he will have an open mind. She’s been anticipating this for so long and tells him it’s a dream come true. He’s surprised she can even recognize him.

She looks just as he remembered. Diane admits she has been following his life through the media and seen what an amazing man he has become.

Kyle doesn’t want this to be about him. He wants to hear about her. She sits down and agrees to answer anything.

“What possible excuse could you have to justify what you did?” he asks. Rather than answering this, she tells him how much she missed him.

Kyle recalls the last time they saw each other and she sent him to Switzerland under another name. She never came for him. Jack did and told her she was killed.

Diane insists she always wanted to come for him but she was in way over her head and was afraid that he would be taken away in the courts. The Newmans and the Abbotts all hated her.

With Deacon’s help, she found a way to disappear and had every intention of reuniting with him. Eventually, she realized she couldn’t without ruining his life too. She claims that leaving him was like leaving part of her soul behind.

The only thing she could have offered him would be a life on the run. Jack never would have stopped looking for them. He was better off without her and Jack gave him the stability she couldn’t.

Kyle paces and says she may be right. Having her as his only parent likely would have been a disaster. But losing her left a deep emptiness he never though could heal. He can’t imagine letting his own son suffer like that.

She’s sorry, but repeats he would have paid a worse price if she’d raised him on the run. He tells her that Jack has never torn her down in his eyes. She’s beyond grateful for that. It’s more than she deserved.

He’s surprised she’s admitting that so freely. She can’t hide anything from him if she wants to convince him she’s changed. Kyle doesn’t know how he’s supposed to believe that.

He points out how deceptive and manipulative she had to be to bring them back together. That doesn’t encourage trust. She claims she couldn’t just inject herself back into his life without warning.

Diane explains that she wasn’t ready to come forward before now. It took her a long time to hit bottom and realize she needed therapy. There was a long, lonely road of rebuilding herself to become someone worthy of being his mother.

She’s ashamed of who she was but has done everything in her power to change and evolve. Crying, she claims she will never be that negative force in his life again. Whether he believes her or not, that’s the truth. 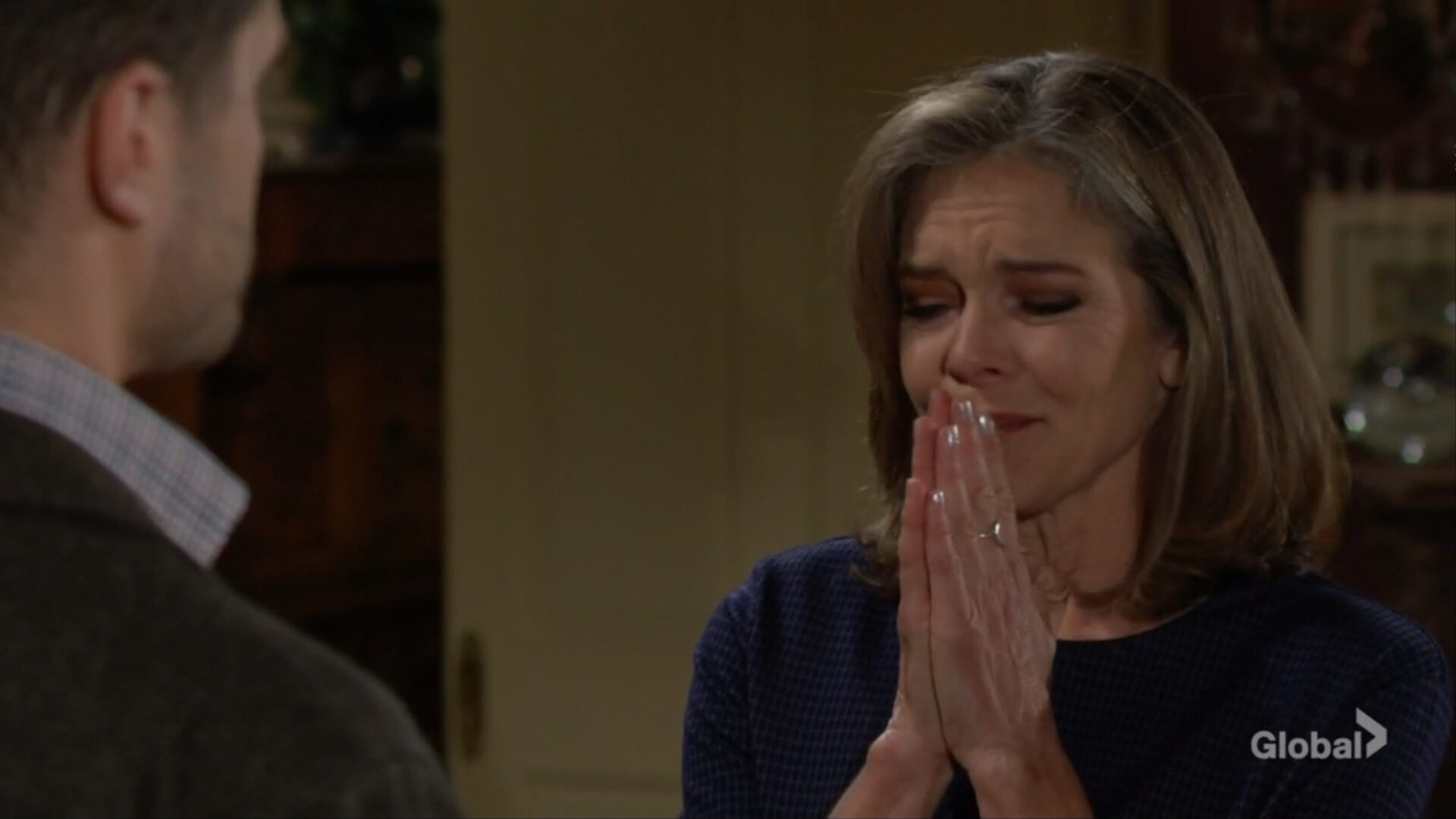 Kyle asks what she wants from him. He’s not sure he’s capable of giving her a place in his life. It took him a long time to come to terms with a life without her. Now he is happier than he has ever been and won’t risk bringing any turmoil into his life with his new family.

His mother understands this is all new to him but she does hope he can contemplate forgiveness at some point. Kyle thinks that’s asking a lot.

She offers to leave him to think and asks if they can meet again. “Maybe,” he says.

Jack and Phyllis arrive. They thought this would have ended and offer to make themselves scarce. Diane was just leaving. 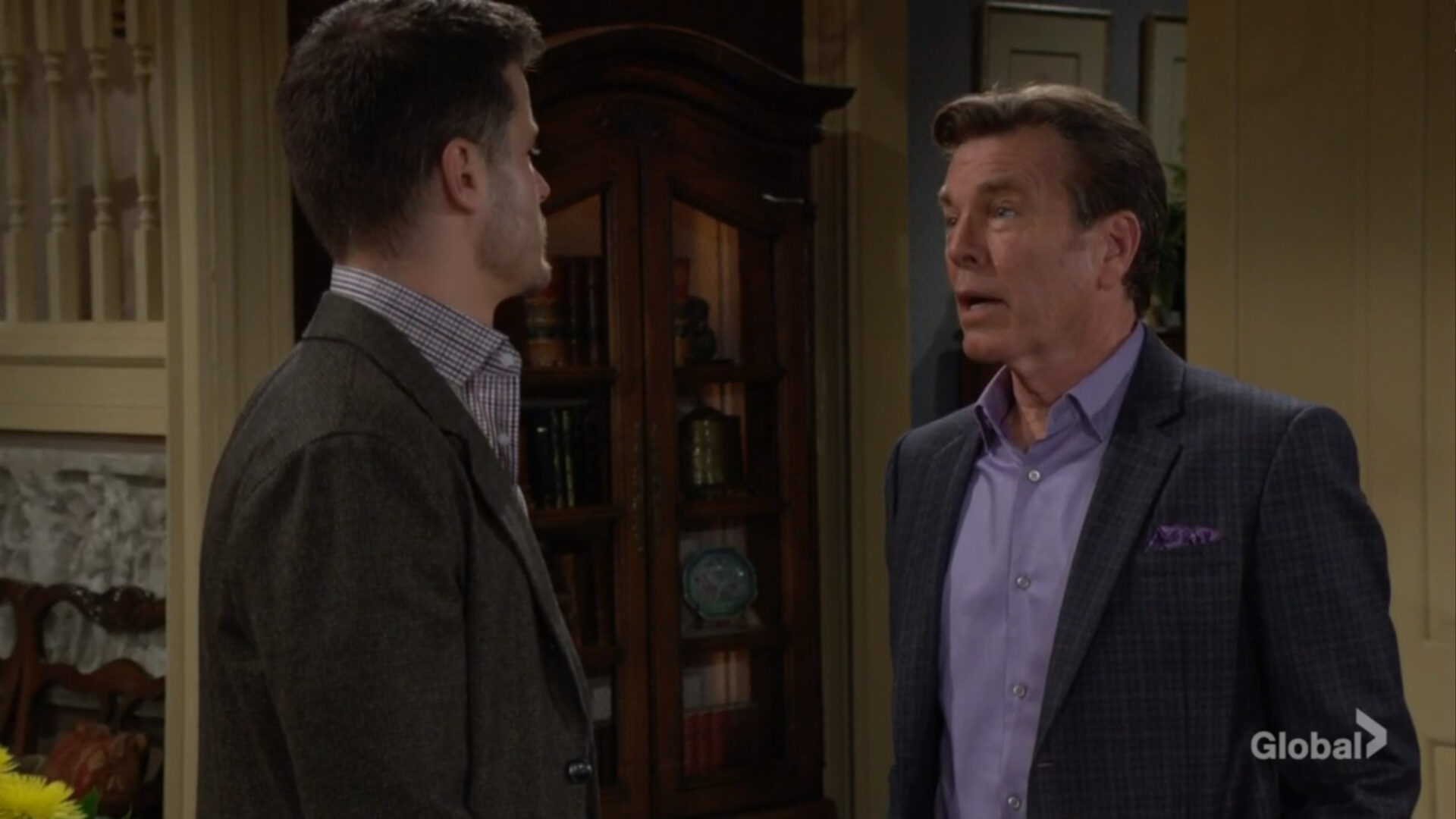 Once she’s gone, Jack explains that Traci has Harrison. He’s sure Kyle is wiped out and won’t press for details about his conversation with Diane. Kyle needs some air. His father reminds him he will be there if he needs him.

After Kyle has exited, Phyllis leans on Jack.

When Chance arrives at home, Abby comes down the stairs and guesses he’s had a rough day. He just told Sharon how and why Rey died.

He suffered a massive coronary while driving. That’s a surprise to her. He explains Rey’s fate was sealed and there’s nothing anyone could have done.

She gives him some water and they feel bad for Rey’s family. He tells her how much Rey always helped him. He was his best friend and he will miss him very much.

Abby reminds him that as cruel as this tragedy seems, life can still be beautiful.

Someone rings the bell. She encourages him to get rid of them. It’s Victor. They are both happy to see him.

They get him to sit down and explain Rey had a heart attack. “Woah,” Victor says. He wonders how Sharon handled it.

Chance has been trying to inform Victoria but didn’t want to explain this in a voicemail.

Victor offers to tell her himself. He dropped by to see his grandson. Abby explains he’s asleep and goes off to check on him.

Alone, Chance assures Victor that he is managing to cope with the loss of his friend. He can see this is all weighing on Abby too.

Victor tells him to take this as a reminder to embrace life and spend a lot of time with his beautiful family. You never know when your wife will need you. Chance thanks him for all the wisdom.

Victor is proud of how everyone has come together for Dominic. He’s looking forward to when he is old enough to hear boxing stories. Abby comes down to say he’s awake so her father heads upstairs.

Abby is happy to see Chance is smiling. He explains her father just reminded him of everything he should be grateful for.

Victor returns and comments on how much the kid has changed. “Be cool brother,” he says before taking off.

Taking Abby’s hands, Chance tells her that she doesn’t need to check in on him every five minutes. He is processing Rey’s death but he won’t fall apart like before. Abby wonders if that is a promise he can keep.

He assures her he is present and strong and won’t waste a minute they have together by shutting down. 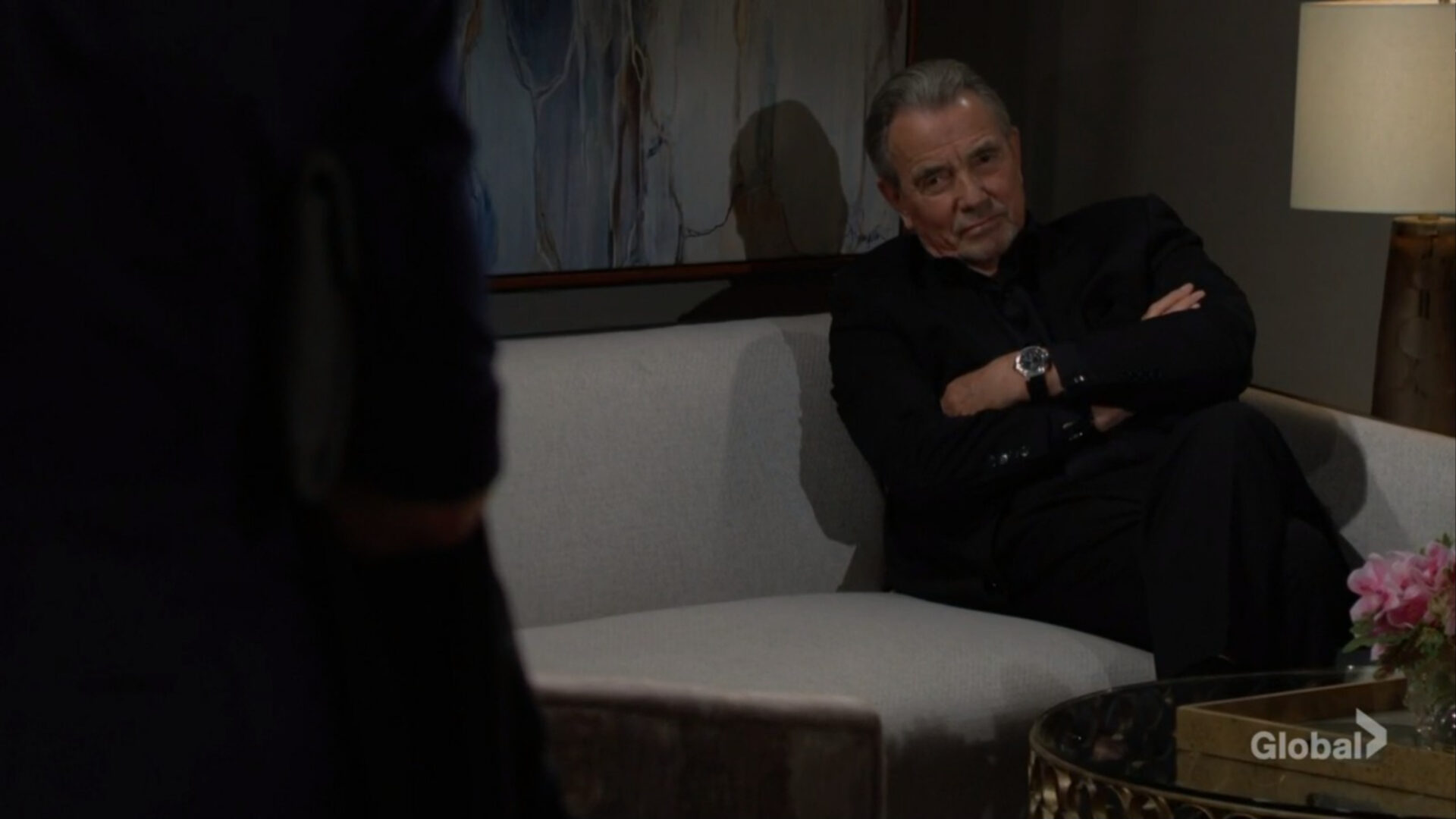 Diane is shocked when she arrives in her hotel suite and Victor is waiting for her.