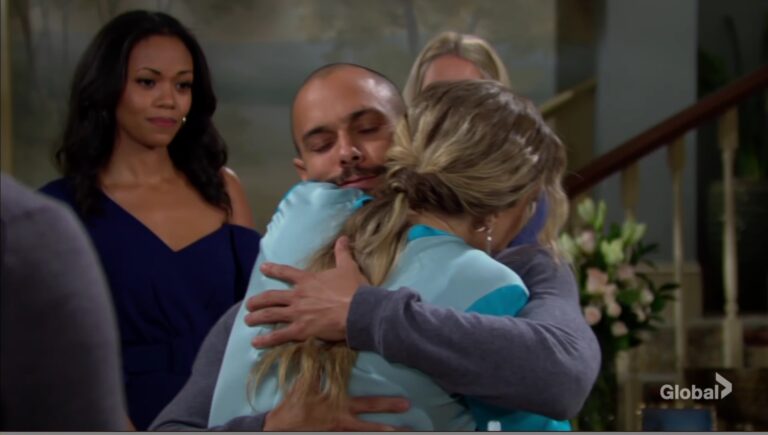 Canadian Y&R day ahead recap for Thursday, January 20, 2021 episode, which airs in the USA Friday, January 21. (Recaps live by 5:45 PM EST daily.) In the previous episode, Chance asked Abby to let Devon have shared custody. In this episode of CBS’ The Young and the Restless, Noah’s sadness is noted by all, Devon and Abby make up and make an agreement to let Dom stay with him once a week, and Michael makes a decision.

At Crimson Lights, Tessa and Mariah tell Sharon that they’re engaged. Mariah shows her mom her ring and they all scream, happily. Sharon congratulates the happy couple and they have a group embrace.

Sharon’s gaga over the ring and then hopes they’re not doing it because they think they’ll help their chances at adoption. They deny that. They want this. They make a call to tell Faith that they’re engaged and from the excitement, it seems like Faith is thrilled. She asks when the wedding will be.

Outside, Lauren meets Michael, who fills her in on Victor asking him to work for him. Michael insists that this time it’ll be different. If he accepts his deal, he won’t be at his beck and call. Victor was fine with it. Lauren’s skeptical, but Michael believes it’ll be respectful. “No more getting hauled out of bed at 2 am.” Lauren wants to weigh in with pros and cons. She gets out her tablet and they get down to business. They talk about the work itself, and Victor’s agenda and he gets excited because Victor told him things were about to get interesting. Lauren finds that exciting. They flirt and Michael lists that under the pros list.

At Newman Enterprises, Ashland looks through some contracts for ChancComm. He’ll walk them up to legal, later. He asks Victoria a question and she seems distant. She tells Ashland that Adam’s right. Their father can be unpredictable.

He sees the world as a game of chess. Ashland understands. He sees them as pawns. “Sometimes,” she says. They can’t let their guard down. She’s the only one Ashland trusts and he hopes she feels the same.

They get close and she talks about making each other deliriously happy. They talk about what Victor might be planning. Victoria’s not sure if it was the best move to show her hand at wanting to takeover Newman Media. They know they need a new strategy.

The key is making her dad believe this is his idea. Ashland says they need to go back to their original idea. “Make Adam fail,” Victoria says first, they sue for the name. The suit will cost headaches and tie up lawyers. Then they hit with step two.

New! Y&R spoilers up to January 28

At the ranch, Victor talks about Adam’s serious lack of judgment with Billy and “That  Spectra woman.” It’s why he’s going to be involved in Newman Media more.

No damage has been done to the company yet. Nikki thinks he’s made the right decision. Adam will have to accept it. Noah and Nick stroll in. Noah tells them he accepted a full-time position at New Hope.

Nikki and Victor are visibly shocked. They’re thrilled. Noah smiles. Nikki asks about his art. He talks about how his art became more about business says, “I had no spark.” He’ll focus on it the way he wants now.

At the Chancellor’s manse, Abby tells Devon and Amanda they’ve had time to think. She  says Chance helped her to see she has nothing to be afraid of, that they’re ready to hear what he wants. Devon’s glad. She doesn’t have anything to worry about.

He loves both of them. They’re like family to them. He didn’t have any intentions to take anything from them. Abby didn’t see that before but she does now. Chance is sorry it took so long. He appreciates what a strong presence Devon has had in Dom’s life.

Abby tells him she and Chance aren’t  backing down. “This is what you and Dom deserve.” Everyone tears up, happy this whole thing is over. Christine and Amanda talk about drawing up papers and Devon has a request.

He appreciates how much thought she put into Dom’s name. He’d like to give him Neil’s last name since he’s her godfather and he’s the man who showed him what family was about. Dominic Philip Newman Abbott Winters Chancellor. They both like that idea. They agree to let Devon have the baby overnight once a week.

Abby gets the baby and hands him to Devon, thinking he needs to be a part of this. Devon thanks both of them and holds the baby. Abby calls Devon a great friend and apologizes. It won’t happen again.

They embrace and Devon and Amanda leave. Christine hopes that they’re happy with the way things went and after she’s gone, Chance asks Abby if she’s okay or if he pushed her to agree to something she didn’t want. She’s thankful that he opened up to her. They hug and profess their love. Abby does think this is a good thing for Devon and Dom. It’s going to take some getting used to.

Nick and Noah walk into Crimson Lights and overhear Tessa telling Faith on a call that they only just got engaged an hour ago. Noah looks glum. Mariah and Tessa tell them their wonderful news and notice her brother doesn’t seem happy.

He tries to smile but it doesn’t take. They retell their engagement story and Tessa tells her fiance he’ll cherish what she said to her forever. Sharon and Nick stare at Noah’s sad-sack face. Everyone talks happily about the wedding and Noah offers to get coffee for them.

Sharon goes off with them as Nick can’t help but think of Cassie. He’s proud of Mariah and hugs her. Tessa goes to Noah to offer help. He tells her he’s happy for them.  He’s never seen two people more in love. She wants to see him happy. He jokes, “I’m so happy it’s almost nauseating.”

Elsewhere, Sharon says to Nick. “Oh no. It looks like Noah’s fallen in love with Tessa again.” Nick doesn’t think it’s love. He’s going through changes and he’s resilient. This new job will be good for him.

Michael wanders into the ranch and Nikki goes to check-in at the office. Michael tells Victor he wants to discuss terms. Victor’s glad to hear it. They make plans to have Michael start now, unofficially.

At home, Devon tells Amanda how happy he is that his son will live here once a week. Amanda will file the paperwork as soon as she can. He asks what the rush is. Is she afraid they’ll change their mind? Amanda’s just doing due diligence.

Devon looks at Neil’s photo and tells his dad that he’ll carry on his legacy.

Ashland tells Michael that he certainly lives up to his reputation. Michael says he doesn’t think Ash has been around long enough to know much about him. “You’d be surprised,” Ashland says with a grin.

Devon tells Lily about the changes to Dominic’s name.

Victor tells Adam that acquiring Newman Media would become a formidable company, and make Newman Locke the power media house. Adam looks upset. “The question is, what would it mean for me?”

The next Y&R recap: Chelsea lashes out at Sally for monopolizing Adam and playing games