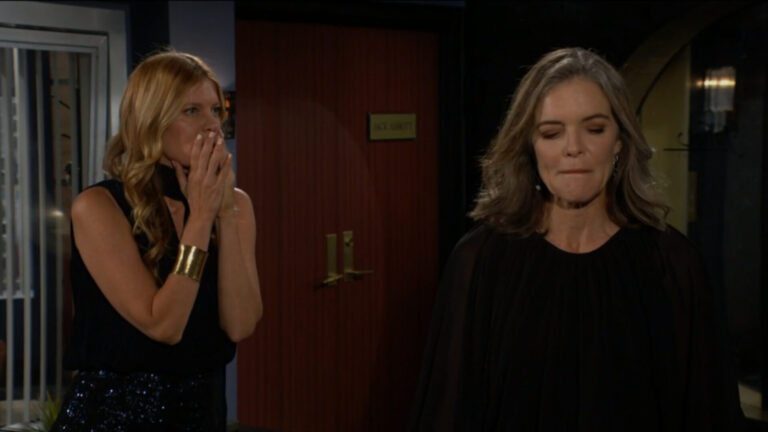 In this episode of CBS’ The Young and the Restless, Nikki arrives in Los Angeles and visits Deacon, Phyllis finds it hilarious when Victor rebuffs Diane, and Lily talks to her team about the IPO. In the previous episode, Summer and Kyle laid down the law with their moms and Imani thanked Nate for supporting her.

Nikki braces herself when she hears Deacon knock on her door at the Beverly Hills hotel.

He’s more surprised than her. He never thought he’d see her again. In fact, she’s the last person he expected.

She wasn’t sure he’d show up if he knew she texted.

He says of course he would He’s thought a lot about her over the years and tells her she looks good.

She rolls her eyes and asks him to save his flattery. Has he forgotten he almost ruined her life?

She starts bellowing about lying to her and pretending to be on her side when she thought she killed Diane Jenkins.

He admits he did set out to use her but he started having feelings and fell in love with her.

She flashes back to being off the wagon and Deacon trying to talk her down, trying to bring her to a meeting.

He told her at the time that he saw her in the park but he won’t tell anyone.

He begged her not to drink but she just wanted him gone so she can get her drink on.

He asks how Nikki knows about Diane and is surprised that he didn’t see the article about Diane returning to Genoa City.

Nikki fills him in on Diane throwing him under the bus. He laughs at the irony and asks if Nikki’s there for revenge.

She says she is — on Diane, not him, as long as he cooperates.

Nikki thinks Diane is hiding something and tells Deacon he owes her and she wants to know what that is.

She needs him to help her expose “that bitch” and get her out of their lives for good.

Deacon only recalls that she had a lot of money. She was using a Bentley.

Nikki’s surprised. Deacon says she was always with a guy but when he asked her about it, she’d shut him down.

Nikki finds that exceedingly interesting. Maybe Diane kept her distance from him because she didn’t want his grubby paws on her money.

Deacon laughs. She’s probably right. He’d like to help as a way of making amends but she says there’s no forgiveness.

If he has nothing to tell her, she’s out. She’s about to open the door when he tells her he remembers something. He has to show it to her and asks her to meet him at his place of employment.

This ruffles Nikki’s feathers. Later, when he’s gone, Nikki tells Talia that Deacon had a few clues for her about Diane and wants to meet again.

He’s cold with her and asks what she needs.

He recalls seeing her when she and his wife got into a slap fest.

Phyllis interrupts and finds it interesting seeing them together.

She laughs and wants to watch. Victor stares and Phyllis leans on and whispers, “What are you talking about? Do I have to ask?”

Victor didn’t invite anyone to join him.

Phyllis is waiting on her dinner order and Diane says they had a meeting there earlier. “How riveting,” Victor says.

Diane wants to talk to Victor in private so Phyllis wishes her luck because Victor sees right through her. “Just like I do.”

Victor tells Phyllis, “Good seeing you,” causing an eye roll from Diane, who sits down.

She has done a lot to atone for her past but doesn’t carry ill will toward him or Nikki. He can’t say the same.

When Diane says she’ll keep trying to atone, he says he’ll pass it on to Nikki when she’s back from her trip.

Diane asks what the trip is about and Victor laughs and calls it business.

She tells him she poses no threat to him or his loved ones and reminds him that they too have checkered pasts.

Diane’s been treated like scum but she didn’t return to suffer endless abuse.

She tears up and says she’s got too much to lose by letting anyone scare her off. Vic asks if he should bring in the violins now.

At Chancellor-Winters, Lily wants to pursue this IPO and meets with her brother and Billy at work to ask if she can get their support by the end of the day. Devon balks.

He knows he’ll want to hold off.

He knows the merger just happened and thinks two major moves will be too soon “for a number of reasons.”

Lily offers to email him some projections, thinking he’ll change his mind.

The men read the numbers and Billy’s impressed. Deacon wanted a unified family business to leave behind for their kids and grandkids.

He worries that won’t be what it’s about.

They’d have to answer to others. Lily gets it.

She knows what he’s saying but thinks they can’t pass this by.

Victoria and Nate meet at Chancellor park. He tells her that he’s certain that the IPO will happen.

They laugh together, knowing it’ll be good for Newman.

But 51% of the stock will remain at Chancellor-Winters. Nate is willing to sell his shares to her, making Newman the majority shareholder.

She calls it a huge risk but he doesn’t mind, as long as he’s CEO.

She says, “Consider it done.” They shake on it and he smirks.

Phyllis appears as Nate leaves and says she ran into Diane and her father. Victoria is more interested in her mother going to L.A. to see Deacon.

Phyllis wasn’t sure she knew. She was keeping her confidence.

Victoria wonders when she became her mom’s confidante and blames Phyllis for letting her go. She asks what the hell is wrong with her. Phyllis thinks it’ll be cathartic.

She calls the man a pig but thinks Nikki can deal with Deacon since she deals with Victor Newman on a daily basis.

Victoria doesn’t find that funny. Phyllis thinks her mom has changed and she’ll remain on her goal of getting rid of Diane.

Back at Chancellor-Winters, Nate turns up. He says he’s been doing reflecting and thinks Devon was right. He was overstepping.

He knows he needs to respect others and regrets resigning in anger.

He wants another chance. Devon looks skeptical. Lily asks what changed his mind.

Nate lies that he cooled down and thought of what they said and realized he’s been all talk and hasn’t been listening.

Billy says that’s happened to him many times. Nate still feels strongly about his ideas but he felt attacked and lashed out.

“I was only thinking about myself.” He talks about their united front and knows it’d be bad for the IPO if word got out that he jumped ship.

Devon asks how things will change.

Nate vows to do whatever they want. “You’re the boss,” he tells his cousin, hoping he’ll meet him halfway.

Victor walks in on Victoria talking on a call at Newman Enterprises. She tells him she’s got something brewing but isn’t ready to tell him about it just yet.

Diane arrives at Jabot to a disingenuous Phyllis who taunts her about thinking Victor would give her the time of day. She did warn her!

Phyllis asks if she’s going to apologize to her and Diane shoves her. Phyllis pretends to be shocked. She can see that her enemy is cracking.

Diane flies off the handle and remembers that Victor faked his own death many times.

She warns Phyllis that if she keeps it up she’ll regret it.

Phyllis gets in her face, thinking this is the real Diane.