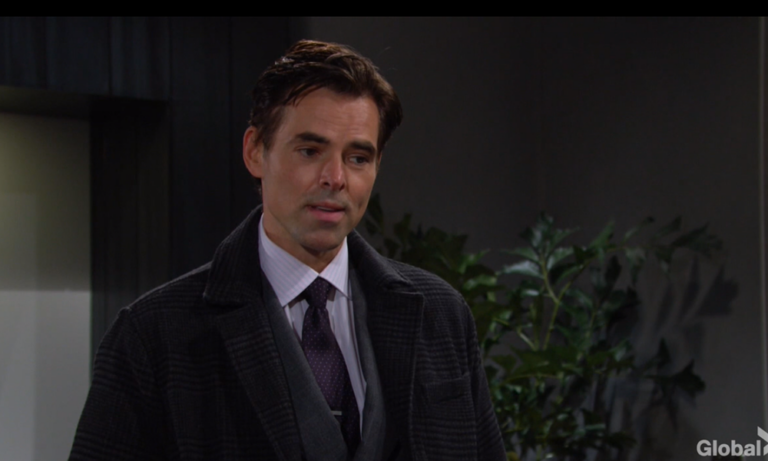 This is the Canadian “day ahead” Y&R episode from the Wednesday, March 4, 2021 episode, which airs in the USA Friday, March 5. On today’s day ahead, full episode recap of Young and the Restless, Sally wants to befriend Summer, Jack’s date is crashed by Kyle, and Lily and Victoria have a tense discussion.

At home, Kyle tells Summer he’s worried about what Sally could do with what he knows about Tara. Summer’s surprised since she thought he wasn’t concerned about her. Kyle admits they crossed paths earlier. They argued about her relationship with Jack. Kyle’s now worried he’s backed her into a corner. He needs to protect his son, even if he can never see him. Summer’s sorry. Kyle is too but this is how it has to be.

Sally gets Jack a brandy after dinner at his place. They talk about how delicious Mrs. Martinez’s cooking is and Jack enjoyed hearing her little moans of pleasure with each bite. She’s embarrassed and asks, “What is happening here?” Jack says they’re chatting after dinner. He asks what would make her happy. She’d like to run her own fashion house one day. She also wants the love of a good partner. Jack thinks she’ll get what she wants. Sally refuses to let anyone get in her way. Jack was the same as her and says it’s caused problems. She admits she’s learned painful lessons but feels more equipped now to take on the world.

Lily finishes a call at Chancellor as Billy learns Ashland Locke is looking to divest. She thought Billy put that behind him. He can’t. He has concerns that Victor or Victoria will buy the company which will hurt Chance Com. They need to convince Locke that they’re the right fit to buy his company. “We’re going to have to charm him.” Lily says the price is out of their reach. Billy considers that. “Let me handle it.” He video chats with Jill and tells her he has a proposition. She may be coming to Genoa City to be with Abby. He was hoping to do this sooner. She laughs, knowing this is about money. She asks if Lily’s onboard and they agree to talk about it soon.

Victor finds Victoria at work. She’s surprised to see him. He reminds her not for the first time that he owns the place and can visit when he wants. She laughs. She knows that. He tells her he may buy Ashland Locke’s company and offered it to Adam to run. Victoria sneers. Her dad reminds her Adam’s his son. Victoria thinks Adam wants to get back at her for the exposé. Victoria’s not on board with this. Victor thinks she’s making a big mistake.

At home, Adam reads his tablet and then looks up and sees Chelsea. Shocked he says, “Did you come in by yourself?” She wonders to herself what he was doing on his tablet. He tells her about the business opportunity Victor offered him and he wants her opinion. To herself, she doubts she has a say in anything he does. He tells her about the proposal and she tells him with an eye blink that it’s okay. When Victor calls, he lies about who he’s talking to and takes off to meet. Once he’s gone, Chelsea thinks Adam is doing all of this not for them but for him and Sharon. Chelsea’s able to later move her legs right out of the chair and her body forward. She hangs on to the sofa and pants as she tries to stand. She stands up on her own!

Kyle turns up at Jack’s and Sally goes rushing off at the interruption. Jack’s not happy and once she goes, he asks what’s going on. Jack isn’t into scrutinizing it. It’s too early to tell. But if he has something to say, Jack urges him to spit it out. Kyle decides he doesn’t want to talk.

In his room, Billy calls Jill again. He says things are going well with him and Lily. He tells her about Ashland Locke’s company and how Victor wants to buy his company. So does Billy. Jill asks if Lily wants this. Billy knows she’ll come around. Jill says this can’t be about Victor. Billy says it’s a good buy and will fold seamlessly into their operations. Victor is motivated to destroy Chance Com.

Sally sees Summer at the club. She hopes they can wind up good friends. Summer thinks that’s crazy. Sally thinks they’re alike. Summer scoffs at that. “There’s this service in Japan where you can rent a friend. So maybe you should look into that.”

Victoria goes to Chance Com to see Billy but since he’s gone, Lily invites her to stay. She gets her a scotch, neat. The tension is high and they talk about the kids. Lily talks about how she and Billy have a lot of balance in their relationship. She boasts about how wonderful it is. Lily thinks Victoria is drawn to him more now that he’s becoming the person that she wanted him to be while they were together. Victoria thinks it’s presumptuous that Lily is trying to claim she knows what she’s thinking. Lily shrugs. She’s glad they cleared the air. Billy returns and finds Lily still there. He’s excited and admits Jill said no to their plan, though she sees it’s a good deal. He’ll find another investor.

Adam meets Victor at the coffee shop. Adam asks if this is strange for him that this is new opportunity is going so well for them so far. Victor laughs. He wants to work with his son.

Victoria goes back to work and calls Ashland Locke, telling him she is interested in buying his company, no matter the cost.