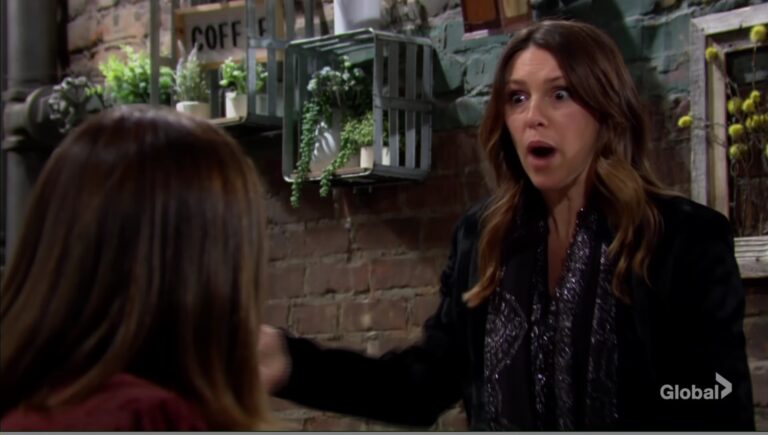 Canadian Y&R day ahead recap for Friday, January 21, 2021 episode, which airs in the USA Monday, January 24. (Recaps live by 5:45 PM EST daily.) In the previous episode, Abby agreed to shared custody with Devon. In this episode of CBS’ The Young and the Restless, Adam and Chloe are tired of the animosity between Chelsea and Sally, while Abby struggles with concerns that she’s not strong enough to let Dominic go once a week to Devon’s.

Sally arrives in Adam’s office at Newman Media. She tells him what a success her trip was and that she didn’t bring him back a trinket from New York. She says next time he’ll have to come and that if he does, there will be nothing romantic.

He seems disinterested, so she asks what’s up. He acts as though he’s busy and she invites him for a coffee and to lend and ear. He closes his laptop and agrees, it’s a good idea. They go.

At Society, Chloe finds Chelsea alone. Is she hiding from Adam and Sally? Chelsea admits it’s true. She’s trying to keep away from the office tension now that Adam made it clear they’re not going to reunite.

She can’t be around him and tells her friend that she told Adam the fashion division needs to relocate to gain independence from Newman Media. “We’re moving.” Chloe gets it. She doesn’t want to run into Adam ever. Chelsea thinks they’ll be able to work better.

Chloe thinks they should be in a loft or warehouse. Chelsea nods vehemently. “Less corporate and stodgy.” Sally and Adam turn up and Sally brags about the tour of Dior and her great time in New York. It’s awkward while Chelsea tells her that their office is relocating. Sally’s shocked.

Why wasn’t she told? Chelsea reminds her that she works for them. Sally asks if Adam signed off on this and Chelsea tells her to ask him. “He’s standing right there.”

Adam lets them all know that it’s just talk right now. The women want Sally to go with them to location scout and she mimics waving a flag to cheer them on. She’s excited to help. Adam instead lures her to a table for coffee and once they’re gone, Chelsea’s jealousy rears its head.

She doesn’t like that Sally’s been back two minutes and already with Adam. She can’t even recognize her ex. Chloe doubts that Sally knows Adam gave her the heave-ho. Chelsea hates that Sally went to Adam to tell him about her trip instead of her. She insists it’s about the chain of command but Chloe thinks she sounds jealous.

She’s done with managing her moods and wants to move on. She thinks they need a bigger staff. Chelsea barely listens as she gawks at Sally and Adam’s table.

At their table, Sally complains that Chelsea was dismissive to her and that they’re acting as though the move is a done deal. Adam says it’s not a done deal and asks her not to get worked up. It may not even happen.

Sally doesn’t like how Chelsea treats her. Adam thinks Sally came in hot, bragging about her job. Adam asks for the highlights of her trip and she tells him a fun story that he doesn’t seem to hear. She offers an ear. He asks if she can listen as a friend. “Absolutely.” He tells her his dad’s taking a hands on role at the company. He’s lost credibility. She asks what triggered it.

Adam tells her about how he thinks he put the company at risk for falling for Billy’s plan. This is what Victor does. Sally assumes it’s frustrating having him undermine Adam. Adam admits he always seems to fail in his eyes, though he hasn’t been a model son. He’s made an effort lately and thought things were going smoothly. “It’s demoralizing.”

Sally’s sorry. Adam’s not sure where it’s coming from. He tells her that his dad’s always three moves ahead but this time, he doesn’t even know who the opponent is. He has second thoughts and admits he probably shouldn’t tell an employee that. He asks her to forget it. She refuses to and asks him to own it. She gets that lack of trust which makes it hard for him to do his best work.

Adam’s grateful for her listening but doesn’t need advice. She promises to keep it to herself and admits she felt the same as he does when she worked at Forrester. Talk turns to Chelsea. Adam admits he told her they were over and she wants to avoid the awkwardness of working together.

Sally likes the day-to-day run-ins with him. He smirks and she quickly says, “For professional reasons.” He doesn’t look as though he believes that. She complains that she has no decision-making power and that Chelsea constantly puts her down. Adam doesn’t want to go over this. For now, she has to listen to them.

Country music plays at the coffee house as Sharon giggles about texts Mariah sends. Rey smiles as she suggests a recording studio, the old GC Buzz studio, and a tattoo parlor. They represent moments in their love story, but Sharon hopes they take time and make it the wedding of their dreams.

Rey thinks they deserve that. He hopes she’s not going to be an interfering bride because no matter the location, it’ll be amazing. They talk up the couple and then bring up Noah’s feelings for Tessa. Sharon knows it’s hard to let go of feelings. Rey thinks she’s overreacting to what he feels but Sharon says Nick sees it too.

Rey says, “Well, you know, I’m just a trained detective. I can’t read all the signs.” Sharon frowns. That’s not what she meant! She calls him an amazing step-father to her kids and would never insinuate that he has a lack of insight into her children. He thanks her. He knows she and Nick have a unique perspective since they’re their kids.

They agree it’ll be great for him to be there from the beginning with Tessa and Mariah’s kids. They talk about how hot of a grandma she is. She calls him a hot grandfather and they kiss.

Chloe and Chelsea arrive for coffee and Sharon overhears their conversation about expanding and moving the fashion platform. Sharon asks if it’s personal but Chelsea lies and denies it. She goes to get some sugar and sees Rey. She thanks him for the Christmas gift he sent Connor.

Rey’s glad Connor liked the gift. They talk about how close Chelsea is and Chloe and Sharon appear, wondering what’s taking her so long. Chelsea admits she forgot about the sugar and started talking to Rey. She thanks him again and tells him to stay sincere. It’s such a rare occurrence for her. He doesn’t think being sincere should be as such, causing Sharon’s eyes to widen, slightly as she listens. Everyone disperses and Sharon asks how his talk with Chelsea went.

Rey says she has a good attitude but it’ll be tough for her, moving on. “You seemed to put her at ease. You have a good rapport with her,” Sharon says. Rey thinks talking about people’s kids always does that. He kisses her and goes.

Abby stares at Dominic’s stuffed lion in the living room at Chancellor mansion. Chance offers to make her breakfast and she glares. She knows they’re doing the right thing but it doesn’t make it easier. She thinks Louise should be with Devon when he takes the baby and then talks about needing a new bartender at work.

Chance pushes her to talk about her feelings and she reveals she worries Dom will think he doesn’t love him enough not to fight for him. Chance doubts it. He reminds her she loved Brad and Victor. Dom won’t think differently. They look at photos on her phone of Dom that Louise sent.

She admits she’s worried she’ll struggle handing her son off to Devon. “I’m worried it’ll break me.” Chance knows that won’t happen. She defied everyone and tracked him down in Spain. She doesn’t think she’s strong enough to walk away, even if it’s one day a week. Chance asks if they should call Christine and change their minds. Abby can’t do that. They can’t go back on their word.

At Devon’s, he stares at a stuffed zebra and thinks of father and son time with Dom. Amanda grins but doesn’t look convinced. She tells him she’s just considering contingencies, even though she believes Chance and Abby have been sincere. Until the paperwork is filed, nothing is set in stone.

They make out and hug after their Dom discussion and when Christine texts, they learn that Abby and Chance approved their amendments to the custody case. Everything is on track.

Chelsea and Chloe arrive at Newman Media to tell Adam that they found a place to move. Adam has decided that they can’t afford it right now but they tell him they got a good deal. He likes that idea and then agrees that maybe Chelsea is right.

He allows the move and considers that she’s right. It’s best if they’re not crossing paths all the time. Chelsea seems hurt and leaves the room. She runs into Sally, who asks if they found a new office and Chelsea barks at her to ask Chloe to fill her in, which causes Sally to question what she can to do make her treat her with respect.

Chelsea’s not sure she can. Chloe listens as Sally says she hasn’t done anything wrong at work and reminds her nothing is going on between her and Adam. Chelsea talks about how she’s monopolizing Adam and knows the game the redhead is playing. She wrote the book on it.

She stomps off and Chloe, bitches that she’s tired of this. Sally goes into Adam’s office and bitches about Chelsea going off on her. He doesn’t want to get into it but Sally won’t be treated that way. She doesn’t know what is going to happen with the division, especially since his father doesn’t care about it.

She asks for pointers about Chelsea. Adam tells her she has to figure it out with her. If her plan is to go to war with Chelsea, he doesn’t like her chances. Sally barks that she thinks he underestimates her.

Chloe finds Chelsea back at Crimson Lights. She yells that she can’t handle the bickering. Chelsea snaps that she doesn’t want to spend another moment in that office with that woman. Chloe reminds her that they need Sally, who is valuable to their business. She’s done trying to help her and thinks it’s time she figured this out. She takes off.

Day ahead recap for Y&R – Adam’s stunned by Victor’s news and Michael refuses to let his BFF move to Milan!