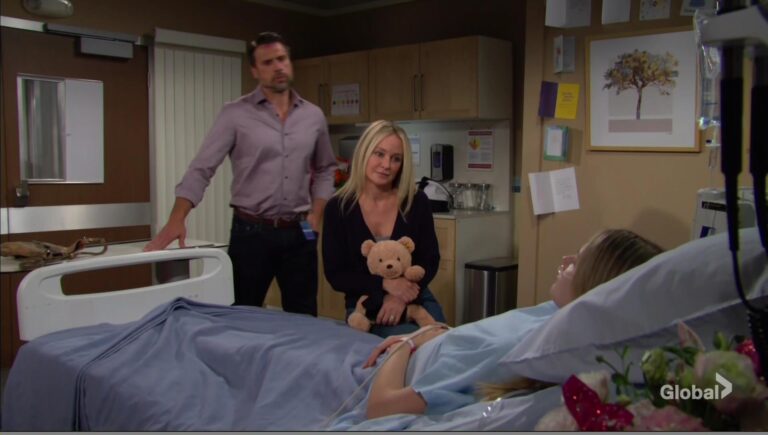 This is the Canadian Y&R day ahead recap from the Monday, May 10, 2021 episode, which airs in the USA Tuesday, May 11. In the previous episode, Adam was a match to donate a kidney to Faith and in today’s episode, Chelsea reveals herself, Nikki and Phyllis have words, while family waits for word on Faith and Adam.

Adam is shown in surgery on his side while in the waiting room, Phyllis asks how he convinced Adam to risk everything to give Faith his kidney. Nick says it’s best if she doesn’t know. She’s even more curious but he pressures her not to ask. Phyllis tells him Faith will be fine. In Faith’s room, Rey needs to take care of something. She asks what their future will look like and he asks to wait until Faith comes through surgery with flying colors and then they can discuss it. He goes. Meanwhile, Nick goes for a walk and Nikki tries to get Phyllis to leave. Phyllis says nothing is more important than supporting Nick and Faith so she’ll stay. They argue that Victor’s not there and Phyllis says she’s not judging. She’s been texting Noah to keep him up to speed. Nikki thought she was planning Summer’s wedding, she didn’t know she was trying to be helpful. Phyllis gets Nikki’s attitude. If it was her child in there she’d be biting everyone’s head of. “So I get it,” she says and goes. Nick goes to Faith’s room, surprised to see Rey left. She says he had something important to do. Nate appears. He knows it’s been a while and tells them it’s almost over. “Take a breath,” he says before he goes. Sharon thanks Nick again for bringing Adam back. They owe him. Nick hopes this situation doesn’t turn into a jailbreak. He has something else in mind. Adam doesn’t know this but Nick says he saw another side of Adam in the storm cellar. He saw the goodness Sharon has seen. Mariah arrives and sits with Nikki since there is no news. She’s surprised to hear about Nick finding Adam in Kansas and about the tornado. Mariah will hold off on the thank-you gifts for now. She asks what she can do for her mama but Nikki asks what she can do for her. Mariah brushes off her concerns and then talks about her crash course in family that she has had since she’s been a part of this one. She tears up and talks about feeling undeserving and about the scary moments. Later, Nate says there were no complications in the surgery. Everything went perfectly. The specialists Victor had flown in were some of the best he’s seen. Now they wait to see if Faith’s body accepts the organ. They’re glad Adam pulled through as well. Once Nate’s gone, they repeat what he said and talk about how she is a fighter. Nate goes to tell Phyllis, Nikki and Mariah about the good news. They’re excited. Nikki lets Phyllis call Noah. She agrees to it after she calls Summer. Later, Nikki’s gone and Phyllis tells Mariah how glad she is that Faith is okay. She tears up and says it reminds her of when Summer went into anaphylactic shot and she was afraid she’d lose her. Mariah calls that awful. It brought back memories for Phyllis. Mariah’s sorry.

Rey arrives at the ranch. He tells Victor they need to keep this short, then looks at Chelsea, surprised. Chelsea freaks out. “Is this a trap?” She told him there was a way out for all of them. Was he lying? Victor assures he hasn’t. Chelsea asks for protection from Victor and Adam. He hates her. Rey asks why. She shakes her head. It wasn’t her fault. They can’t blame her for this. She blurts, “I’m sorry. I’m so so sorry!” Rey asks if she’s trying to confess to something. She asks why he’d want to help her after what she did. She throws her cane down and stands up and walks. “I’m not a bad person,” she says. She was relieved he was okay and tells him they’re the same, “victims in this.” She didn’t want to hurt him. She wanted to teach Sharon a lesson. He’d never have died. Rey glances at Victor and shakes his head. “I’m sorry,” she repeats over and over. She and Adam were going to leave Genoa City for both and then her stroke ruined all that. Then Adam took Sharon into her home. Does he have any idea of what it’s like to live with someone when they’re obsessed with someone else? She talks about them sleeping together in the bed she used to share with Adam. Dr. Hedges arrives with Michael. Hedges asks her to tell him how she feels. She thinks Victor is out to get her. Rey tells Michael that she confessed to poisoning her. He hasn’t arrested her but she’s not in a good state, psychologically. Chelsea points at them and asks why they’re judging her. She blames Adam and Hedges asks who he is. She cries and tells him who he is and cries that the DA should be giving her a medal. She felt invisible while in her chair and cries that people look right through her. It’s why she kept her recovery a secret. She snuck out when Adam was asleep and took a ride app. She got inside Sharon’s and saw “That trashy figurine and trey that Adam gave her years ago.” She hid it in Adam’s car so he couldn’t deny he was guilty, then she went upstairs in the dark and found his toiletry. She put the thallium in his shaving cream, shampoo… She wasn’t trying to kill him. She just wanted to make him sick. He’s been hurt enough. “We both have,” she exclaims, thinking it proves she’s not crazy. “Or maybe it proves I am?” She asks if this is a trial and worries Michael wants to hurt her. She blames Adam and tosses a chair and says this isn’t who she is. “I’m not this person.” Hedges says it’s not fair and she wants to help. He gets out a syringe. It’ll calm her down. She looks cagey and begs the men not to let him do this. The doctor thinks Chelsea’s suffering from post-stroke psychosis. He wants her to be in a psych hospital for the time being. Victor agrees and doesn’t think she could be behind bars right now. He asks if Adam is free. Michael says Adam is a free man. Michael leaves Chelsea sleeping on the sofa while Victor says he’s glad Rey believes Adam’s innocent. Chelsea wakes up and gives Victor a half smile. He does the same back.

Related: Y&R opinion on Chloe, the glutton for punishment

Nate visits Adam in his room. He feels like, “Somebody dropped a house on me.” He struggles to sit up and Nate says it’ll be a day or two before he’s strong enough to leave the hospital. Where would he go? Adam’s sure Rey has the hospital surrounded. Nate doesn’t know anything about that but respects what Adam did. He hopes this can be a second chance for him. Later, Nick and Sharon are in Faith’s room while she sleeps. Sharon goes to make a call while Nick sits with his kid. Sharon calls Rey and leaves a message about Faith and Adam. Nick asks for her to return since Faith woke up. Mariah goes inside to see her later while Nick visits Adam. Nick says to commit this moment to memory. He thanks Adam for Faith’s life. The surgery was a success. “You did make a very convincing case,” he says and asks what’s next for them. Nick thinks it depends on his brother.