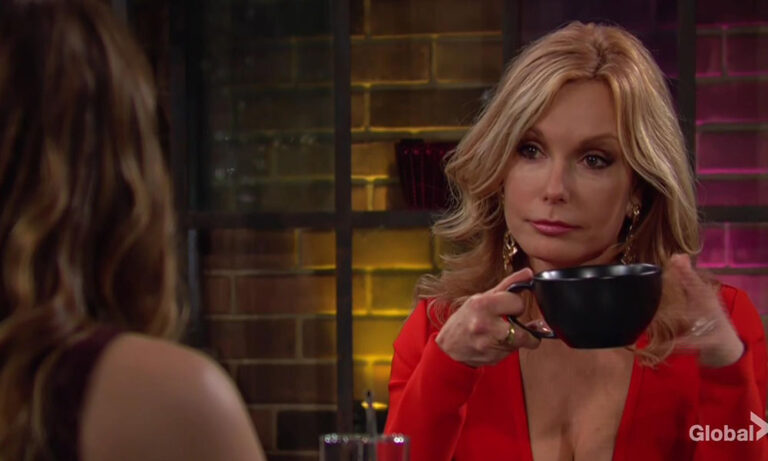 This is the Canadian “day ahead” Y&R episode from the Monday, March 1, 2021 episode, which airs in the USA Monday, March 2. On today’s day ahead, full episode recap of Young and the Restless, Sally pressures Kyle, Lauren doesn’t judge when Sally makes an admission, and Chelsea works hard to send out a message.

Lauren and Sally get their coffee fixes at the coffee shop. Sally has ideas on how to save the company money. Lauren likes that idea and invites her to email them. She heard that Sally traded in her car. Sally knew her old one wasn’t going to cut it up north but is curious about who told her. Lauren says Jack admitted he helped her. Sally grins. Jack’s a great guy. She feels lucky to have his friendship. Lauren’s not judging her. She tells her not to worry if others do.

Jack and Summer grill Kyle at work on his canceled trip to New York City. Kyle looks on with a deer in the headlights look. Jack leaves them and Summer assumes he was going to see Tara Locke. Sally implied to Summer that there was something more she didn’t know about their story. Kyle thinks Sally’s playing games and refuses to respond. Gloria arrives and guesses they’re talking about Sally. She didn’t get a good vibe about her. When they won’t dish with her, she tells them they’re no fun and takes off, with Summer following. Later, Sally appears in the door. She sees Kyle looking at Harrison’s photo and assumes he can’t bring himself to tell Summer the truth. She makes assumptions about what will happen if it turns out he’s Harrison’s father. Kyle acts as though there’s nothing more to tell. Sally asks then why did she walk in on him looking at the kid’s photo on his phone? Kyle’s pissed and deflects. Sally vows she’ll say nothing. She’s focused on work and her friendship with Jack. Kyle barks at her, demanding she tell him the truth. Can he trust her to keep her mouth shut? Sally says if he does find out about Harrison, he should forget about the Lockes and keep the truth from Summer. She goes and Kyle drops his phone behind as he leaves.

Phyllis tries to hide Sally’s laptop when Nicholas appears at the club. She lies that it’s hers and that it needs to go back to the shop. He offers to help, she says she’ll take it back to the store. When he won’t give up pressuring her, she finally admits it’s Sally’s laptop. Nicholas can’t believe it. “The Grand Phoenix, where privacy is overrated.” Phyllis shrugs. Sally has designs on Jack. Phyllis says she’ll have to go through, “This bigger, badder bitch,” and she does air snaps for emphasis. Nick says she likes focusing on a nemesis. He asks, “You need to pick a fight with someone cause you’re bored?” Phyllis tears up and denies it. Nick’s sorry. Phyllis says this is instinct and once “that man-eater is gone,” they’ll all thank her.

Chelsea sits in her chair and moves her hand, clutching the bar. She tells herself, “You can do this!” She moves her whole body forward until Adam comes down the stairs and then she freezes in place. Once he heads to the other room, she again reaches for the bar. Adam reappears and says he knows she’s upset. She doesn’t need to worry about those claims. Inside her mind, Chelsea says she knows Adam kissed Sharon. She wishes he’d just admit it. Adam thinks they could get her medical treatment elsewhere. With Connor. He has a meeting with Dr. Cavett to discuss leaving Genoa City. Chelsea wonders if he’s really going to see Sharon. She moves again, once he’s gone. Later, Chloe visits. She made sure Adam wasn’t around and asks why she doesn’t want him to know she can move her hand. She wants to know how she can help. Chelsea cries and Chloe says not to do that. She calls her strong and powerful and they’ll figure this out. Chloe puts her cell phone beside her to see if she can type. Chelsea types out “Sharon…” Chloe learns Sharon wasn’t helping her. She’s hurting her! Chelsea writes Adam and Sharon, and Chloe asks if they’re together. Chelsea blinks yes.

Summer meets Lauren at the cafe and says her meeting with Dollar Bill seemed productive. Lauren agrees. He sent contracts from Spencer Publishing. Summer’s shocked. She has a lot on her plate and will look at them by the end of the day. Lauren admits Phyllis called and said there was something important she needs to tell her. Does Summer know what that is? Summer assumes it’s about Sally and tells her to take it with a grain of salt. Summer wants to give Sally a break. On the way out, she sees her mom who refuses to say what she learned about Sally. Summer asks her to leave it alone. Phyllis and Lauren dish on how hot Michael looks now that he’s a Silver Fox. Lauren blames herself for all those white hairs. They talk about Sally’s interest in Jack and her extensive search on Jack and the Abbott family. Lauren scoffs. She searches like that all the time. Phyllis worries he’ll fall for her. Lauren wants Phyllis to let it go but Phyllis is worried about Sally’s ambition.

Dr. Cavett meets Adam at the coffee house. He says he suggested to Chelsea that they leave town and spend time with Connor. The doc thinks it’d be stressful to see his mom in this condition. It’s a bad idea. It’s too soon. When she shows signs of progress, they can revisit. Adam’s frustrated. She goes and he finds Sharon. She asks how Chelsea is. “How do you think she’s doing?” He asks. He insists he’s doing the best for her. Sharon fishes and Adam reveals he was thinking of leaving town but the doctor doesn’t think it’s a good idea. He does think they should keep their distance. Later, Nick runs into Jack and warns him that Phyllis is looking for trouble with Sally. Jack tells him to tell Phyllis that he doesn’t need her concern.

Adam returns home before Chloe can discuss Chelsea’s admission that something is up between Adam and Sharon.