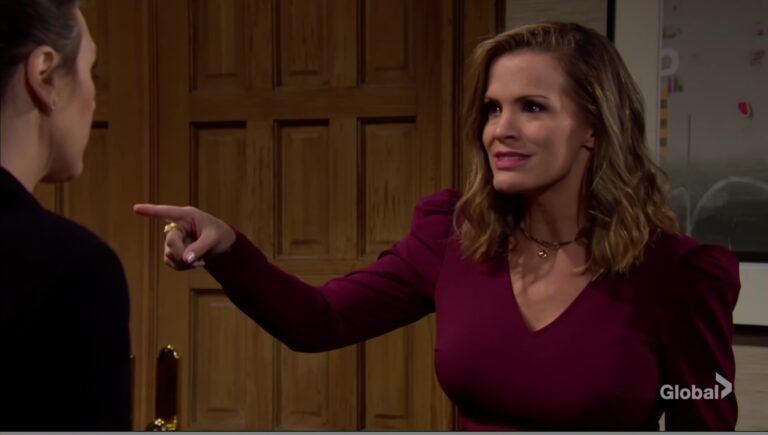 Canadian Y&R day ahead recap for Monday, January 3, 2021 episode, which airs in the USA Tuesday, January 4. (Recaps live by 5:45 PM EST daily.) In the previous episode, Sally and Adam almost kissed on New Year’s Eve. In this episode of CBS’ The Young and the Restless, Chelsea gets her nose out of joint when she talks to Sally about spending time with her ex New Year’s Eve.

Chelsea spots Sally at Crimson  Lights. She’s surprised to see the redhead up so early. Chelsea’s killing time while she waits to pick up Connor, she says and asks who Sally rang in the new year with. “Anyone special?” She tells her she was working with Adam.

Chelsea asks if  he took pity on her. She admits yes, he did, and they shared some vodka and caviar at the end of the night. Chelsea asks her to talk her through the ideas they shared before the booze and caviar. Sally shares ideas and Chelsea shoots them down fast and hard. Sally thinks she’s being too limiting. The content has already done well for them. She should know how well it’ll do since she’s the face of the brand!

At the office, Adam cleans up as he flashes to celebrating with Sally last night. He smiles. Chloe arrives. It looks like someone broke in and had a party. He lies that he was working overtime. It’s time to line up more ad sales and sponsors. She finds it hard to believe upon seeing the caviar and vodka. “Chloe, I don’t need to explain myself to you, okay?” Chloe gets her hand on her hip and realizes Sally was there last night. She tries to persuade him to let go of both women for his own good. “They are ticking time bombs,” she notes. His new fashion platform will implode. He asks if she’s threatening him. She’s not. It’s a fact. She can’t keep them from getting at each other’s throats. Their division is one of his most popular. It won’t look good if his business resonance crashes and burns because he can’t keep his personal and professional from meeting.

At the condo, Billy thinks he can still get vindication if Adam comes after him. Then he hits him with a libel suit and Victoria waltzes in and picks up after him. Lily asks why he’s so sure. This is the best option, he tells her. If he works with her at Chancellor, it’ll feel like a hand-me-down. At least this will cripple Newman Media and they’ll suffer humiliation at watching him run their department. He has to meet with Victoria and wants her there.

Y&R spoilers up to December 31

At Grand Phoenix, Victoria hears that Phyllis had a spectacular New Year’s Eve. Victoria would have thought that she’d be in shambles since she had just broken up with her brother. “I’m resilient.” Victoria tries to figure out who she was with but Phyllis says she’s talking about the hotel. Her hard work has paid off. Many enjoyed their time at the escape club and she had to hire more massage therapists.

Phyllis taunts her about meeting her dream man in Ashland Locke, considering all she found out about him. Victoria shoots her a look and she backs off. “Nobody’s perfect,” she says. Victoria asks her  to get someone to send coffee. “Three cups.” Phyllis taunts her when Lily and Billy show up, then goes to get the coffee. Victoria wants to kick their plan into overdrive. Lily crosses her arms and asks what she means. She wants to stop making this about Billy spiraling. Adam’s not taking the bait. They should exploit his vulnerabilities. Then he’ll retaliate.

Victoria will go after him for some holiday thing and Billy can talk to him about what it’s like to be a bad dad. Lily thinks it sounds like Victoria thinks she’s in charge now. Victoria nods. She is. Lily doesn’t like it. Victoria tells her, “Don’t be so sensitive.” Adam arrives and Victoria wants to start. They see Traci and Billy says to stop.

Adam leaves the area and Traci tells Billy that Jack told her everything. She doesn’t like what he’s doing and chastises him for it. She goes to make a massage appointment and Lily suggests they not go through with this. Victoria refuses to throw in the towel because of one hiccup. Lily rolls her yes. She’s been a part of the plan for five minutes. Victoria saw through Billy’s plan and thinks they need her to make this work. Billy worries that Traci will blow this out of the water. At the desk, Traci sets up her massage with Phyllis and Crystal. Adam sees her. She wishes him a happy New Year. He tells her he’s been stood up for a meeting. She hopes his new year brings him happiness.

He admits he’s doing well and looks at Billy. “Compared to some people.” Traci hopes he’ll stay away from her brother. They talk about fighting their way back from darkness. Phyllis eavesdrops and rolls her eyes. Traci thinks Adam lives for conflict. “Traci’s right,” Phyllis says. He could say the same about Billy. Traci hopes they’ll stop this feud now. Since Adam’s meeting isn’t going to happen, Phyllis encourages him to go. She reminds him he’s talking to The Traci Abbott. Traci laughs. Adam goes to talk to Victoria, Billy and Lily. He’s curious as to what they’re discussing. Billy says they’re discussing their plan for the children, not that it’s any of his business. Adam goes and Billy thanks Victoria for keeping quiet. She know it wasn’t the right time. By the bar, Traci heard Phyllis stood Jack up during the holidays. Phyllis doesn’t know what to say. Traci knows they’ll always be friends, despite his nosy sisters. Traci goes to the group and Victoria suddenly has to leave.

Chloe arrives at Crimson Lights. Sally complains that Chelsea shot all her ideas down. Chloe wants to dive in but Chelsea needs to pick up Connor. Sally snipes that Chelsea’s jealous of her, personally and professionally. She admits she spent time with Adam last night and admitted it to Chelsea. “I assured her it was strictly work.”  Chloe blasts her for lying to her and then reveals she stopped by the office and saw the vodka and caviar. Sally thinks that she’s overreacting. Their rivalry will push them to be better. Chloe doesn’t think so. She asks if she has feelings for Adam. Sally reminds her this isn’t high school. She isn’t trying to steal her friends’ boyfriend. She has to go back to work and create more ideas.

Chelsea arrives at Adam’s office. He apologizes for rushing out on her last night. She tells him not to worry. She invites him to take Connor to lunch. He’s in. She asks if his work emergency worked out. He tells her it’s nothing she needs to worry herself about. He mentions Jabot coming on board for the fashion platform. Chelsea tells him Sally pitched her the same idea. She gets on edge and admits she knows Sally was his work emergency. She thinks Sally was trying to mark her territory. “Chelsea, I don’t belong to anybody,” he says.

He tells her they watched an old movie. “That’s all.” She freaks out and asks if there’s anything going on between him and Sally. He tells her nothing serious is going on between them and his personal life is none of her business. She asks if he’s falling for Sally Spectra. “I told you I am not dating Sally,” he says. They can’t keep circling back to this. She lets him know she’s selling the penthouse. She doesn’t think Sally is good enough for him anyway. She’s seen women like her before. Sally and Chloe turn up. Sally asks if she can look for a file she thinks she left behind. Adam says it’s fine and the two other women walk  out. Chelsea rants about Sally being insubordinate. “I know how to fix it. We fire her.” In Adam’s office, Sally notes that Chelsea’s moody today. “Cut it out. Right now,” Adam tells her.

At home, Billy talks about Adam’s relationship with his son. He’s vulnerable. He’ll fail at Newman Media the way he does everything else. Lily doesn’t like that this is his ex’s chess games and that they’re the pawns. She refuses to let her use them.

Traci visits Victoria at work. Traci talks about what’s going on with her brother. She reminds her that they worked together to overcome his gambling addiction and she hates to say it but, “I think you’re using him!” Victoria denies it. If Billy suffers from anything, “It’s on your conscience.” She takes off.