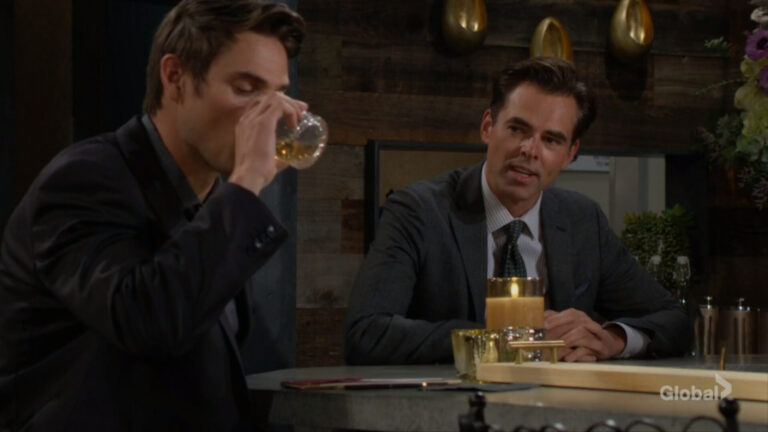 In this episode of CBS’ The Young and the Restless, Chelsea opens up to Chloe, Ashland starts making plans to get back at his wife, and Nick is still deciding on whether or not to return to Newman Enterprises. In the previous episode, Victoria’s announcement angered Adam, and Phyllis had a warning for Jack.

Billy stops by Victoria’s office at Newman. He’s dying to find out what’s going on. She plays coy. Last he heard, she was off with Locke. She’s now alone and seemingly happy. She asks if he has a problem with that but he’s thrilled. She thinks he deserves the truth.

She never intended on reconciling with Ashland. He asks why she didn’t tell him the plan. She didn’t want The Grinning Soul to squeal on her. He grins and says he’s glad she’s safe, sound and single. He thinks it took brains and courage to set a trap for Ashland.

He’s impressed and they discuss how Adam made the original deal to highlight her mistakes. It doesn’t matter. She’s made everything right. They agree she can now move on from Locke.

He won’t be a part of their kids’ lives.

Vicky’s sorry for misleading him. She had no intentions of letting him around their kids. He says he should have listened to her. She’s not fragile. She groans. She’s been telling him this for years.

She talks about how Adam’s disappointed that he won’t be running the show.

They grin. He tells her Johnny has a crush on his counsellor and she’s 96. They laugh and make plans to chat with the kids, later.

In Chicago, Stannis meets Ashland in his room, and reminds him about him letting go of Michael Baldwin. He has another job offer. This time the target will be much more manageable. “My wife,” he says, downing some alcohol.

He asks him to dig up anything on Victor and Adam and tail Victoria.

After what happened in Peru, they want to ensure Stannis can walk before he runs. Stannis winces. “If she buys a pack of gum, I wanna know what flavor.” Stannis leaves.

At Crimson Lights, Nick calls what Vicky did to them cruel. Nikki calls it well worth it. They drink to better days. Nick tells his mom that he met with his sister at her hotel suite before the meeting and how they were close, again.

This makes Nikki happy. She thinks Victoria appreciates Nick’s business instincts. Nick asks if this means she wants him to take the job.

That’s up to her son, but she knows it’d make his father happy. Nick doesn’t like wearing a suit. Nikki calls him dashing in one. Nick gets serious. There’s too much crazy rivalries there.

Look at how angry Adam was after their meeting. He can’t blame him. Nikki didn’t think this would happen so soon. Nick says he can’t resist pitting them against each other. Nikki thinks he’s concerned about them.

Nick argues that he knows what he’s doing and isn’t sure he wants to subject himself to seeing this daily. He has a great life. She tells him he’d do well on the job. He has the confidence in knowing he was a success without his father.

“You could be the moral compass,” she says. He doesn’t see himself this way but Sharon does.

At Society, Adam and Vic discuss what Victoria did. While Victor is proud, Adam asks, “Are you kidding me?” Victor’s oblivious. Adam has to explain that he could feel the ground crumbling under his feet when she was there.

Victor says he never would have had a press conference if he knew she’d be back in a week. Adam believes him but they both know he was hoping she’d return. Victor says they discussed this. He knew.

Adam just wishes he would have given him more time. He doesn’t let his “wreck of a personal life” get into his work.

Victor takes offence. He wants him to support Victoria and work together as a family. Victor asks him to remind him of how he welcomed him into the family and got flak from his siblings for that.

Adam says he’s still paying for his old mistakes. Nothing he’s done has redeemed himself in their eyes. Victor thinks Nick is open to him. Adam says he only had to give up one of his kidneys for that.

Victor calls it an extraordinary gesture. He admits Victoria offered Nick a job but he hasn’t given an answer. Adam is exasperated but his dad wants the three kids to make their company formidable.

Adam can’t argue with that.

Chloe and Chelsea watch Connor play in Chancellor park. Chloe comments on how big he is. Chelsea says she’s mostly feeding him pizza. She apologizes for how things went down last they met.

Chloe knows she was under a lot of pressure. Chelsea was and says she feels like she owes her so much. She’s created so many opportunities and she worries she’ll end up letting her friend down.

Chloe says she can never do it. Chelsea doubts that but says they need to dissolve their partnership. It’s the only way. Chloe offers to come up with a plan to help but she isn’t ready.

She doesn’t want to cause their friendship more damage. She’s sorry and asks for forgiveness. Chloe hates for her to give up on her dreams but Chelsea says she doesn’t have it in her to give their business full focus. Chloe smiles.

She isn’t angry. She’s been worried about her friend. She supports her. Chelsea has a meeting with Lauren and will let Summer and Kyle know she’s turning down the Marchetti deal.

Chloe admits she’s broken-hearted but woudl rather lose the business than the friendship. Chelsea is glad she’s so understanding. Everyone will be dying to work with her. Chloe already has ideas. “I’ll figure something out.”

Victor interrupts Victoria and Billy’s discussion about the kids. Victor’s rude but asks after the kids. Billy ignores his rudeness and fills him on on the poison oak and mosquito bites they received.

They agree they’re glad that when they return home, Ashland Locke won’t be in their lives. Billy goes and Victor asks why “that idiot” was here. Victoria sighs. He says he’s been looking at the fourth quarter projections.

Victoria asks him to wait on that and wants to know how upset he is with her. Before he answers, he’d like to know how much Billy knew about her plans. She admits he knew nothing.

Victor’s glad. He assumes the man would have blabbed about it. She told him that. “I think you and I really do think alike.” He asks why she didn’t confide in her. She didn’t want him to have to lie to Mom. Victor gets it.

She also says he wouldn’t have had the press conference. It helped. Victor’s proud of all she’s done. She’s grateful for that. She’d like Nick to accept her job offer. Vic notices he’s prioritizing his family. He came to him, risking her anger to tell him about where she was. What he did was loyal. Talk turns to Adam.

Billy finds Adam drinking alone at Society and plays with him, remembering that he never did buy him a drink to celebrate his new job.

Stannis sits nearby as Billy mocks Adam for not being able to hold on to his job since Victoria returned. Adam tries to get him to shut up but Billy keeps up his taunts, happily. He thinks when Sally finds  out, she might think she bet on the wrong horse. Adam notices he’s using gambling terminology and asks if he’s okay.

This doesn’t make Billy back down. He thinks Adam’s in a world of hurt with his back up against the wall. Adam is and says Billy of all people should know that this is when he’s at his most dangerous.

From the park, Chloe calls and leaves a message for Sally. She wants to discuss the job offer.