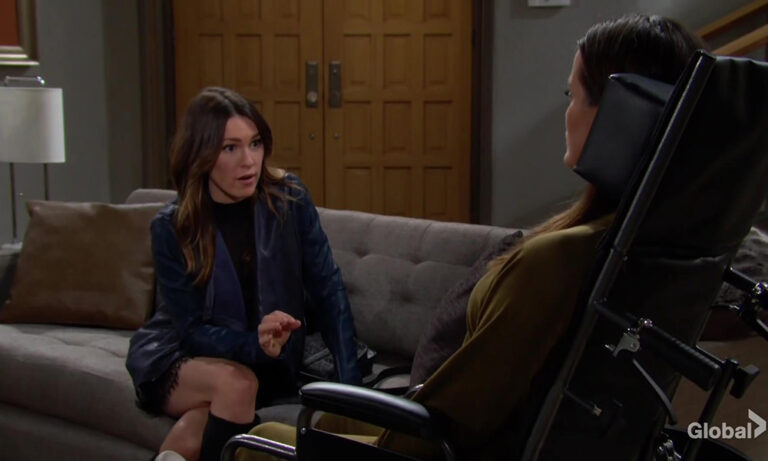 This is the Canadian “day ahead” Y&R episode from the Friday, March 5, 2021 episode, which airs in the USA Monday, March 8. On today’s day ahead, full episode recap of Young and the Restless, Sharon finally agrees to see a therapist, Chloe is on board with whatever Chelsea needs, and Nikki’s uptight about something The Dark Night does.

At home, Sharon finishes a call about Crimson Lights and calls Faith into the room. Has she seen the old-fashioned figurine that used to sit on the accent table? Faith hasn’t seen it and asks if her mom is accusing her of stealing. Sharon says she’s not and flashes back to Adam giving her the figurine that he pulled out of his inside pocket. Sharon was moved. “It’s beautiful.” It came from an antique store and made him think of her, “Strong, fierce and determined.” Sharon comes back to earth and Rey turns up with some treats. Faith tells him they’re looking for a figurine and Sharon tries to make light of it. Rey’s grateful for Faith’s support and is proud of how she’s dealt with her mistakes. Faith goes to do history homework and Rey talks about working things out with Sharon. She says she found three possible therapists. He wants to check them out now, but she’s not into it and when he confronts her, telling her he thinks she’s afraid to hear someone say that for the good of their marriage, she’ll have to remove Adam from their life, she admits that’s what she’s trying to do. Rey is willing to do the work because she’s worth fighting for. Sharon smiles and picks a therapist and makes an appointment with Dr. Carson.

Chloe arrives at Chelsea’s penthouse and says she knows about the photo of Sharon kissing Adam. Chloe will help her any way she can. Chelsea says, “You already are by being here.” Chloe freaks out that her friend can talk. Chelsea asks if this can be their secret. Chloe’s the first to know. Chelsea says she practices when she’s alone. Chloe’s proud. Chelsea admits she stood last night. Her anger at Adam spurred her on. Her left side isn’t as strong as her right side though. Talking to Chloe feels good. When the nurse walks by, Chloe tells a story about Bella and Chelsea stays perfectly still. The nurse takes off and Chloe asks what Chelsea’s next move is. Chels wants Adam to think she’s unaware and helpless. Chloe says fine. She hopes her next move is to leave Adam but she’s not ready. She does want to end this chapter of her life. Chloe doesn’t like the sound of that. Her revenge for Adam drove her to a breakdown which nearly cost her everyone. “Take it from me. Do not let your anger take over.” Chelsea won’t do anything drastic. She needs her friend’s help.

At Chance Comm, Billy tells Lily that Ashland Locke agreed to a meeting. Billy’s excited about the purchase and screwing over his dad. This gets the couple so hot that they head to the bathroom. They leave later, fixing their clothing. Billy can’t believe she’s with him. She’s sexy and brilliant. Lily laughs. She thinks what they have is deeper than just sex. They make a hell of a team. Jack wanders in. They tell him about their bid for Locke’s company and that they need a backer. Jack will finance it. They’re happy. Before he goes he tells Billy, “You missed a button.” Lily covers her face, blushing. She and Billy flirt.

At Newman Enterprises, Nikki and Victoria finish up some work and then Ashton Locke tells Victoria he wants to negotiate, however, he has several interested parties. Victoria assumes Dad and Adam are one. Nikki’s shocked that they’re pitted against each other. Vikki’s angry. Dad has underestimated her again.

Adam and Victor sit at Crimson Lights. Adam’s all in for the company. The Mustache says they move ahead aggressively. Adam asks if he’s concerned he’ll play him. Victor says if he was, he’d be burning his final bridge. Adam reveals that’s just not his MO anymore. Getting under Billy Boy Abbott’s skin is of more interest to him and Adam’s committed also because it’s what he’s wanted from his dad. Trust. Victor thinks this will keep him from ruining his relationship with Chelsea the way he did by spending time with Sharon. Adam says Sharon’s out of the picture. Chelsea and Connor will still be a priority and he and his dad will take no prisoners. Victor laughs. “That’s my boy. I like hearing you talk that way.” He says to ensure the “Sharon business” stays under control. Then they can take care of business ruthlessly. When Nikki and Victoria appear, they exchange niceties and Victoria congratulates him. Obviously, things are better between him and Victor. Adam says they are and then goes. Once alone, Nikki tells Victor she doesn’t approve of how he’s pitting Adam and Victoria against each other. “Well, baby, I don’t care,” he says. He hasn’t gotten to where he is by being nice.

Back at home, Faith gets a text message that reads, “Pretty brave of you putting those mean girls where they belong like an avenging angel.” She smiles. Sharon reappears and apologizes for being preoccupied. She’s listening now and wants to fix things between them. So does Faith. They say I love yous.

Adam returns home to Chloe and Chelsea. He gets rid of Chloe. He couldn’t wait to tell Chels his good news. He says they’re buying Ashton Locke’s corporation. Once he has a handle on the job, they can live wherever they want. He’s happy he will get to crush Billy in the process. Chelsea thinks that he won’t have a chance. This will be over soon and the only one to be crushed will be Adam.

Take a look at yesterday’s day ahead Y&R recap when Sally and Jack’s date is crashed by Kyle, and then join in the conversation with a comment or two and feel free to like and follow Soaps Spoilers on Facebook and Twitter.