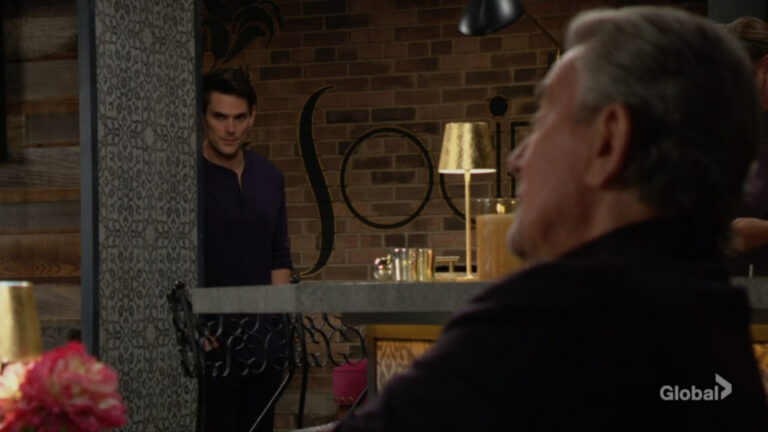 In this episode of CBS’ The Young and the Restless, Noah makes his pitch to Victor, Chance recruits Kevin for his investigation, and Nick tells Sally about the night Locke died.

In the previous episode, Jack and Phyllis had a bitter fight after she publicly exploded about Diane.

Sitting in the booth at Crimson Lights, Chance and Kevin talk about the Locke case. The cop goes over the details of what happened the night he died.

Kevin suggests that the detective is taking Locke’s death harder than everyone else because Rey just died. Chance doesn’t think that’s it.

He wants Kevin’s help figuring out exactly what happened moment to moment. He encourages him to get buddy up with the medical examiner to speed up the autopsy.

Nick is working in the Newman office but is distracted by thoughts of what happened with Ashland the night he died.

Sally eventually interrupts and tells him that she staying. She’s been given a unique opportunity and wants to prove that it was right for her to be given the chance.

She thanks him for being so candid with her. He apologizes for being so blunt. When she gets a text, she blurts out, “Oh my god!”

Sally just learned that Locke is dead. Nick knows. She wonders how Victoria is handling this. He says she’s on a vacation with the kids.

Nick doesn’t think Newman Media should dig into this story. Sally suggests it’s a story they could tell better than anyone else.

He admits he had a confrontation with Locke before he died. Off the record, they talk about what a shock this has been. He gets a text from Chance but ignores it.

On the record, he tells her he’s glad she’s staying. She assures him they will only report the facts. Sally exits, mulling this over.

At Society, Adam stands back and watches his father on the phone. He holds back as Noah wanders in, apologizing for being late.

His grandfather reminds him he’s a busy man. He’s looked at his proposal for Top of the Tower and can see he’s been thinking about it for awhile. Noah gives him his pitch for how to transform the space.

Victor thinks he’s very bright and he’s impressed. But it’s a functioning restaurant and a business. He tells him that it’s good to spread your wings when you are young. He’s sure he will come back one day after earning his laurels.

After Noah wanders off, Adam joins his father. He wonders why he isn’t celebrating Locke’s demise. Victor isn’t going to pretend to grieve, but there’s no reason to be glib.

Adam thought this was a win for the Newman family.

He points out that Chance seems to have a lot of questions about it and suggested he stay in town because his family may need his support.

They bicker about the way Victor uses him and the Mustache asks what the cop said.

Adam says that Chance suggested that Locke’s death might not have happened as it looks.

Victor thinks he should be more concerned about how his sister is doing. Adam reminds him that he warned them that they pushed Locke too far.

Whatever Locke was planning, it doesn’t matter now. “You wanted Locke gone and now he’s gone. That was just a crazy coincidence, right?” Adam asks.

“You are beginning to piss me off, and that’s never a good idea,” Victor warns him. Adam finds this situation intriguing.

His father reminds him of how the company pulls together. Adam wonders why he’s feeling so threatened. Victor reminds him that he’s a Newman.

Noah meets Allie on the roof of the GCAC and instantly guesses that things went badly with Victor. He knew it was a hard sell. Seeing her has made it even out.

She suggests they try the Grand Phoenix next. He knows that’s a good choice but working with Phyllis is a challenge. Allie reminds him he doesn’t have to be her best friend, just lease a space.

They toast. As they get close, he gets a text. Jokingly, she encourages him to check if there is art emergency. He looks and then tells her Locke is dead.

Noah vents about how rotten Ashland was. She knows he hurt a lot of people he cares about. He just saw his grandfather and wonders why he didn’t mention anything about this. “Something is not right,” he realizes.

She suggests that his grandfather was just being considerate to him. Noah doesn’t buy that and has no idea what’s happening.

He thinks she should know what his family is like. She knows that there is some kind of dark history between the families and tries to joke about it.

Noah tells her that Victor once took over Jabot through a hostile takeover. It’s only a matter of time before Victor gets angry with the Abbotts again. She doesn’t scare easily.

Allie understands that people are complicated and contradictory. Her father hid her family history from her but she still loves him.

She wouldn’t think of leaving just as things are getting good between them. They kiss.

Nick meets with Chance on the patio of Crimson Lights. The cop gives him an update on the case. Victor’s security team seemed to all be reading from the same script their boss had.

That’s a red flag for him. Nick tries to dismiss this and doesn’t know what to tell him. He insists that he has nothing to hide and wonders what he wants.

Nick tells him he should be speaking to Victor and walks away.

Kevin shows up after getting the autopsy results thanks to a brownie for the medical examiner. Chance looks them over and Kevin says she couldn’t commit to exactly what happened.

The cop thinks they are getting closer. He goes over the evidence again and wonders if Nick threw the punch that killed Locke. If he did, how did he wind up in a ravine?