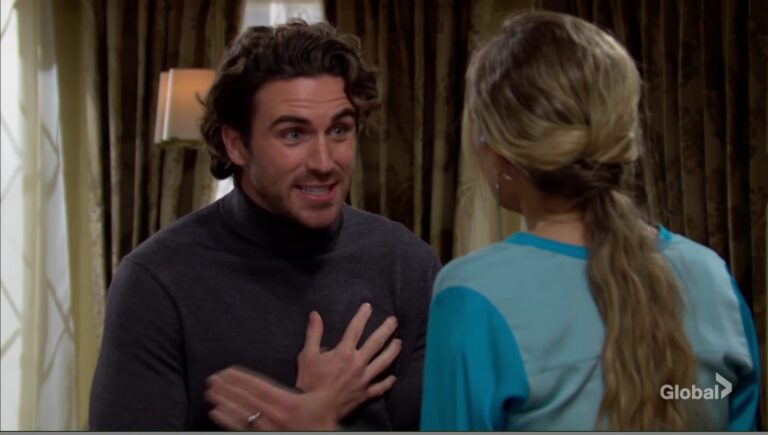 Canadian Y&R day ahead recap for Wednesday, January 19, 2021 episode, which airs in the USA Thursday, January 20. (Recaps live by 5:45 PM EST daily.) In the previous episode, Chance admits he can’t care for Dom. In this episode of CBS’ The Young and the Restless, Tessa asks Mariah to marry her, Noah admits to his dad he has feelings for Tessa, and Chance tells his wife more truths that make Abby see things his way.

At Crimson Lights, Noah and Mariah talk about their lives and how well they’re going. Mariah brings up Devon and Abby’s issue and that she’s got to sit back and hope things work out for the best.Nick turns up and Mariah congratulates them on working together and then pokes fun of Noah for having to do “actual work.”

Noah jokes, “I may have to rethink this.” Nick talks a good game. He thinks his son is up for revitalizing their whole program. Noah tells them about his ideas for community gardening. Nick makes a silly dad joke and Tessa arrives. “There she is. My reason for singing.” Mariah laughs. She’s such a flatterer.

Tessa needs her girlfriend’s help for some PR at Society. They take off. Nick keeps talking as Noah stares off at Tessa, yearning. Nick watches his son and stops talking.

In the other room at Crimson, Elena and Amanda talk about Imani trying to make inroads with work and with Nate. Elena rolls her eyes and talks about how living with Nate has been easy. They’re concerned about Devon and the lawsuit.

She asks how it’s going. Amanda frowns. She fills her friend in and Elena feels terrible. Amanda thinks they’re screwed if he wins or loses because Abby will feel awful, either way. Elena feels for Abby more than Devon, thinking the fear of losing a child is terrifying.

She’s seen it at the hospital. She hopes Dom comes out of it knowing how loved he is. Amanda does too.

At Devon’s, Devon thanks Chance for being honest about thinking he was unable to care for Dominic. Abby thinks Devon’s putting pressure on Chance and that it’s self-serving. Chance denies that. He came there on his own.

Devon reminds Abby he’s her friend and he’d never intentionally hurt her. She tells him he’s hurting her now. He wouldn’t put them through this if he didn’t care so much about the three of them. Abby and Chance take off. Nate turns up for a run but Devon’s not in the mood.

He shares that things aren’t going well for him. He fills Nate in on Chance’s visit and his struggles. Nate understands that Devon just wants to protect the child. After a time, he pressures Devon to go get ready for a run. It’ll be good for him.

Richard Burgi speaks out about being let go at Y&R

At home, Abby yells at Chance for spilling his guts to Devon who will use his words as weapons against them. “He’s twisting your personal drama into a failure, which it is not,” she shouts. She wishes he would have gone to her instead of talking to her or going to a counsellor.

He tells her that a judge will decide for them if they don’t figure it out. She lets him she’s off to check on Dom and Louise. Will he get there when she gets back? He whispers, “Of course.” Abby returns after asking Louise to take the baby for a walk.

Chance thinks that Devon means well but Abby disagrees. They’re doing a good job. Chance is trying to tell her that he doesn’t have what Dominic needs. “I don’t.” He loves that she believes in him but she doesn’t realize what he’s dealing with.

He hasn’t been really honest with her about it. He’s been having nightmares and it’s hard to discuss them. He says they start out normal and cut black and he feels pressure on him.

He can’t move and then he’s in Spain, back there the night of the explosion, watching his team die. He sees those images, hears the sounds, and smells the odors even if he’s awake. He sees smoke, bodies and hears ringing in his ears. He can’t fix it.

Abby cries. She’s so sorry. Maybe it’s why he feels too tired to care for Dom. He’s been trying so hard. “I’m not that guy anymore,” he confesses. He feels he’s letting her down. She says they’ll find help. Christine arrives, with bad news as usual. She tells them she’s sorry they’re at odds with Devon. Abby thinks they’re protected by the contract.

Christine says gestational surrogacy legislation isn’t in place much in Wisconsin. The judge will make the decision in the best interest of the child. It’s not what they want to hear but Devon could win. They’re providing a stable home and could argue that shared custody could be confusing to the baby.

He could make the argument that Abby left the baby with him, not her family. He could say it was encouraging him to play a larger role in his life. They could also assert that Chance is incapable of being a father because of what happened to him.

Abby calls it cruel and unfair. He’d have to testify that the accusation is unfounded. Is he up for it? Abby answers for him that he’d do anything to protect their family. Chance says nothing. Abby goes off on a tangent and Chance stops her.

He won’t lie in court. “Devon is right.” After Christine is gone, Abby tells Chance she can care for Devon until he’s better. He doesn’t know why she’s fighting this. He yells that he’s no good to anyone right now. He’s broken. She yells back that he’s a good father but he denies it.

He says knowing Dom is in good hands is what will help. He begs her to trust him that this is the right thing to do. Dominic will be lucky enough to have at least three people love him more than life when some kids have nobody.

Devon and Nate show up at Crimson Lights for coffee. Noah tells them it’s his first day at New Hope. Devon’s looking forward to working with him. Nick appears.  They talk about some work and Devon calls their father-son bond special.

Later, Noah has trouble concentrating and seems to be doodling or something on his tablet. When Tessa and Mariah left it seemed to deflate you. Noah grins and calls them entertaining. Nick asks if he’s sure that’s all it is. He thinks Noah’s old feelings for Tessa are resurfacing.

Noah would never do that to his sister. “You don’t think Mariah noticed, do you?” Noah asks. His feelings came up working with her and he’s not going to make an ass of himself. They have his support one hundred percent. “Maybe it felt safe to feel nostalgic about Tessa because she’s completely unavailable right now,” he says about the lesbian.

At Society, the whole room is filled with candles and balloons and is set for romance. Tessa lied about needing her for PR work. The romantic setting is for them. Mariah calls it beautiful.  “You’re beautiful and I don’t deserve you.” She asks if they’re celebrating.

Tessa hopes so. She gets down on one knee and smiles.

Mariah’s jaw drops. “Are you doing what I think you’re doing?” Tessa says they deserve happiness. They started out as a delicate, fragile thing and they made choices to forgive and heal. What they had grown stronger, more powerful, more beautiful. Mariah laughs, in shock.

Tessa can’t imagine her heart being any fuller than it is but she knows it’ll get fuller when they adopt. Mariah asks if she’s doing this because of their adoption plans. Tessa says she’s ready. She’s lucky to be the woman who loves and is being loved by her.

It’s why she’s proposing that they make it official.  “Marry me, Mariah?” Mariah gasps. Tessa says this is the part where she says yes. Mariah can’t. Before she answers, there’s something she has to tell her. Mariah tells her that her strength and power made her feel the same way and she brought her back to life.

She knows it wasn’t easy but is thankful she’s so brave. Tessa says they both are. Mariah’s grateful for the crazy, impossible, insane things that have come into their life. She wouldn’t change it because it brought them to this moment.

She says yes. “To a lifetime of us. Yes, yes, yes, I will marry you.” They laugh and Tessa slips the emerald engagement ring on her finger. They embrace and kiss.

Devon and Nate return to the penthouse. Devon can’t stop thinking about the legal case. He gets a call from Abby. She asks to meet with him again.

Friday’s day ahead recap – Devon and Abby’s friendship is saved and Victoria hatches a scheme to get Newman Media.