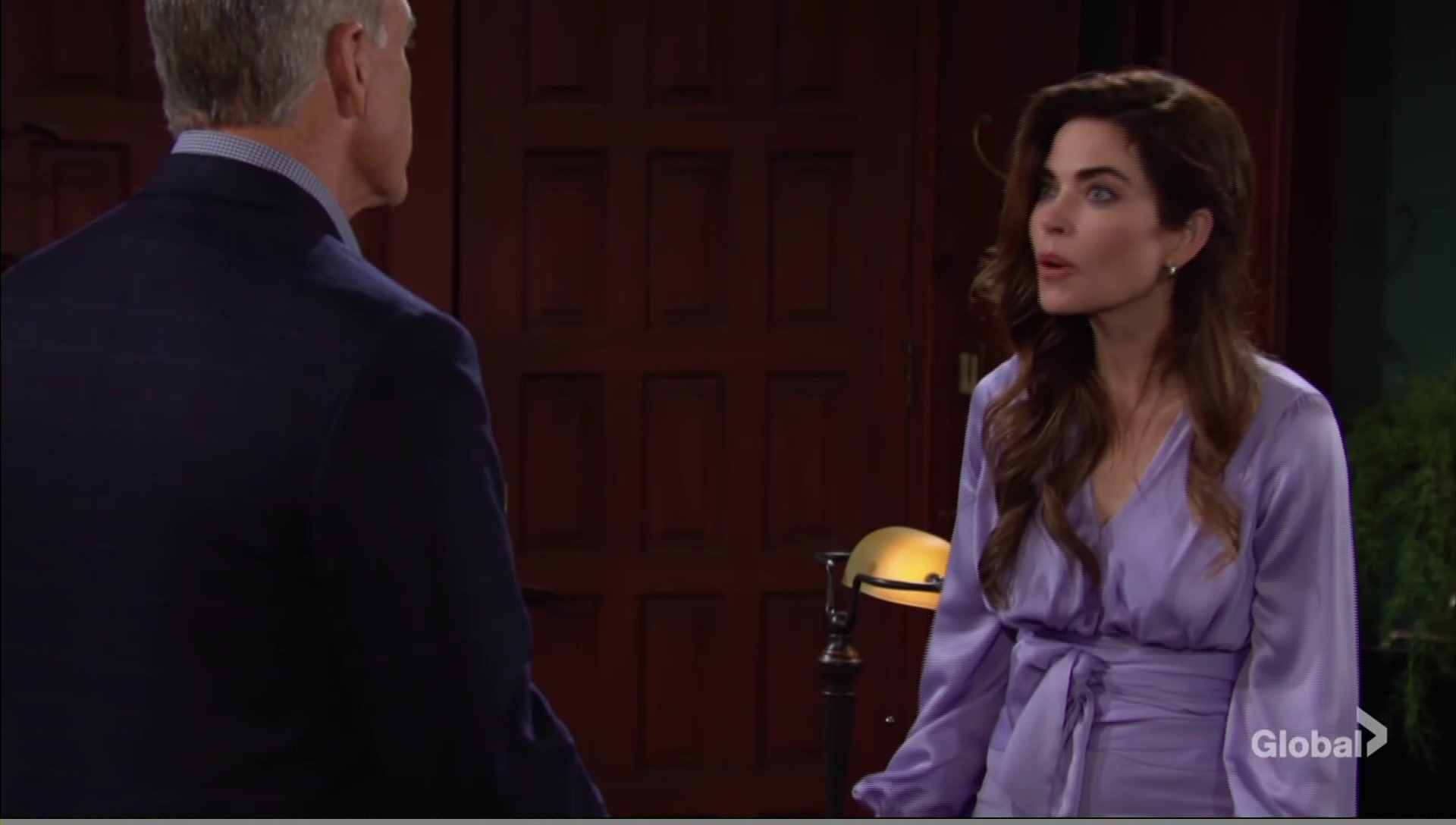 Soaps Spoilers has the Canadian Y&R day ahead recap for the Tuesday, September 28, 2021 episode, which airs in the USA Wednesday, September 29, that is uploaded live by 5:45 PM EST daily. In the previous episode, Nick found dirt on Ashland. In this episode, Nick returns and meets with Victoria and Ash about his past, while Traci and Phyllis share a few laughs, and Nikki tells Billy off.

On a call from his office at ChanceComm, Billy is on a call with someone talking to them about finding out where Gaines went after he left Grand Phoenix. “Figure it out,” he says, disconnecting in frustration. Jack appears and questions his brother. Billy doesn’t say much so Jack assumes he doesn’t want Lily to find out what he’s up to. Billy denies that. She knows. He admits he’s diving into Ashland’s past. Jack confesses that Nick’s doing the same thing. Jack asks why he and Nick don’t trust the man. Billy tells Jack about Ashland suddenly coming into money to buy two TV stations. “An inheritance,” Jack suggests. Jack shoots his idea down since he didn’t come from money. He goes on to tell him that Ashland admitted his father was abusive and he changed his name and left the area he grew up in. Billy’s dying to know the man’s real birth name. He doesn’t want to make the information public. He wants to protect his kids. He won’t let his ex marry someone whose life is based on lies. “We don’t even know for sure if he’s sick.” Jack’s astounded. He sent his son to Italy to live while he went through chemo. Billy’s still unconvinced but Jack thinks he’s hanging on because he can’t let go of Victoria. She’s capable of taking care of herself. Billy counters that Nick’s looking into it too. He’s surprised to know that Nick’s figuring out the riddle of who Ashland is as well.

Nick calls Phyllis from Atlantic City, where he says he’s stuck due to mechanical issues. The lead they worked on took him down a rabbit hole. he shares and he doesn’t want to get into it on the phone. He thinks she and Traci should jump on the plane with Jack and head to Milan. Nick needs to confront Ashland before he goes to see Summer get married. He appears worried as he tells Red, “This trip raised some serious questions and I need answers from Ashland before my sister says, ‘I do’.”

In Victoria’s office, Nikki thinks her daughter is keyed up. Victoria sighs. It feels like there’s a lot left to do for the wedding. She lets her mom know she’s not into the design. Lauren assured her she can fix it but it’s an added stress she doesn’t need. Nikki assures her daughter she can trust that everything will be fine. It’s fine to be anxious, filled with nerves and excitement. Victoria says Ash texted that something unexpected came up and he had to cancel dinner plans. Nikki can see that’s got her more concerned.

At Society, Ashland meets with some man about a change of plans. He doesn’t need the money anymore. He covers that he has a better idea for a gift for Victoria. He calls Victoria to tell her his meeting ended and he’d like to spend the rest of the night with her. Victoria says she made plans with her mom. Nikki insists she break their plans, so Victoria tells Ash she can’t wait to see him and hear about his business deal. Nate turns up and Ashland asks him to join him since he’s waiting on Elena. He talks about enjoying managing his surgical team. Nate asks how he’s doing. “You seem tired.” Ashland shrugs. Physically, he feels remarkably well but it’s been a stressful few days. When Nate asks what happened, Ash covers, calling them ‘”trouble spots.”

Back at the office, Victoria packs her things in a bag and when Nikki pushes, Victoria tells her that she looked up Jesse Gaines, whose father worked for Camila Rhodes, the woman who mentored Ashland and gave him his start. Victoria wonders why he was in Genoa City. She wanted to ask but hoped he’d tell her. She knows trust doesn’t come easy to him. Nikki admits she walked in on Ashland and Victor talking almost conspiratorially. “That does sound like Dad,” Vicki says. She blames Billy for planting suspicions in her mind.

Victoria arrives at Society and looks crestfallen to see Ashland is with Nate. Ash greets her and invites Nate to dine with them. Elena appears and they accept, not noticing that Victoria wants anything but that. Later, dinner is over and wedding plans are brought up. Nate and Elena take off. Ash can tell his bride-to-be is in a mood. She brings up Ashland keeping something from her and then launches into a rant about Nick doing a background check in New Jersey on him, not to mention she learned a little about who Jesse Gaines was. Ashland looks upset and tells her they’ll go back to the office to discuss it. She storms out.

Phyllis arrives at the Abbott’s with her luggage. She tells Traci that Nick’s coming to Kyle and Summer’s wedding, but he’ll go without them. Traci seems surprised that it’ll be just her and Jack. She decides to pour Phyllis a glass of wine, “And then we’ll talk.” Phyllis looks concerned. Later, Jack walks in on them talking and laughing. They all chat and get nostalgic about the past. Phyllis tells Jack that the two of them may be going alone to Milan. Traci has work she needs to turn in and asks them to let her know when the flight plan is sorted. They’re happy to have caught up. Traci goes and Phyllis admits she thought Jack may have confided in Traci about his feelings. Jack denies it. He only told Nick. He fills her glass up and says he’s having ginger ale tonight. The last time he drank, he poured out his soul to her. He won’t subject her to that. Phyllis lets him know he can do that anytime. Later, Jack makes her a grilled cheese and they talk about the kids’ getting married. They get back to talking about Jackie Boy’s lack of boundaries and how she still loves him. They drink to happiness. Nick calls from Crimson Lights. He has something he needs to do and will meet up with her and Jack. He’s going to get to the bottom of this.

Nikki wanders into ChanceComm to warn Billy to leave Ashland alone. He should be worried about defying her since she already told him to stay out of their lives. Billy lets Nikki know that he’s putting pieces together about Ashland’s past. He thinks Nikki should be glad that Victoria’s asking questions and not blinding believing Locke. Nikki yells that he’s the man who failed her consistently. Her daughter is marrying Ashland no matter what. “I’m uncovering the truth,” he says. She tells him not to show his face at the wedding. He’s no longer welcome. She goes and Billy leaves a message for Nick asking if he dug anything up in Jersey.

At Crimson Lights, Elena and Nate talk about Victoria’s mood at dinner. Nate says Ashland was like that, earlier. It was clear to Nate that the man isn’t as well as he claims. Elena thinks that’d make Victoria’s mood understandable. Nate’s worried about his friend and admits he wanted to be alone with her. She’s been so busy. He asks if she’d like to go catch up on some rest. She calls him sweet and thoughtful, but she won’t forgive him if he leaves now. She takes him outside.

Victoria and Ashland arrive at her office. He asks if Billy told her about Gaines. Victoria doesn’t get why she didn’t hear it from him. It can’t be a coincidence that he showed up in GC. He promised not to keep more secrets but she gets unsettling surprises that make it hard to convince herself that there’s nothing wrong here. “Tell me the truth,” she insists. Ashland gets a text from Nick who is home and wants to meet. Victoria asks why. Ash says, “We will soon find out.”

Back at Jack’s, Phyllis disconnects with Nick and Jack asks if Nick’s digging into Locke’s past. Since both Billy and Nick are investigating the man, he has concerns. Phyllis admits Nick knows something and what Victoria decides to do with it is up to her. She wants to focus on the wedding of their kids.

Ashland and Victoria meet with Nick at Crimson Lights. Nick was hoping Ash would come alone. Victoria tells her brother that she thought he was leaving his investigation alone. She asks what this is about.