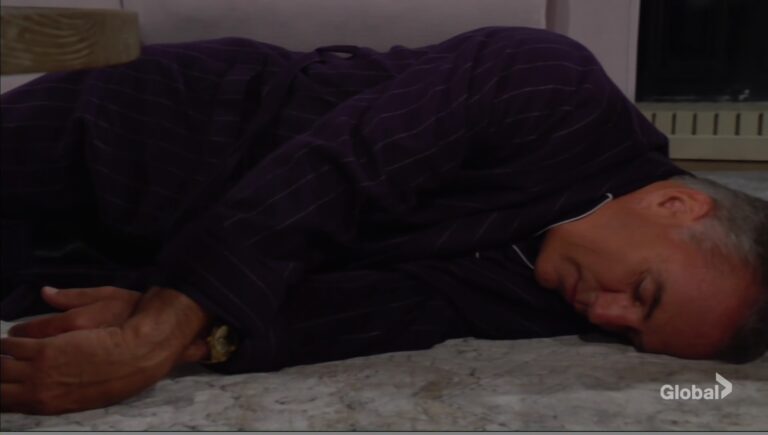 The Canadian Y&R day ahead recap from the Thursday, July 22, 2021 episode, which airs in the USA Friday, July 23. In the previous episode, Stitch announced his move back to Genoa City. In this episode, Ashland falls ill, Sharon and Adam are forced to defend themselves from Billy, and Naya makes a bold admission!

Billy arrives at Crimson Lights in a good mood. He asks why she lets “riff-raff” like Adam hang out in her place. She calls him a customer and tells him Adam was framed by Chelsea. Maybe he’s misjudged him. Billy denies it. He thinks Adam drove Chelsea to a point of madness and is surprised a health professional such as herself doesn’t see that. Maybe it’s because she’s a trained professional that she can see things Billy can’t. She sings Adam’s praises. He saved her daughter’s life, twice. Billy reminds her that Adam took his daughter’s life from him forever. He goes to Adam to taunt him about being a so-called good guy. Billy thinks he’s worming his way back into Sharon’s life a changed man. Billy says she is happy, with a husband who adores her. He thinks Adam should leave her alone. Adam says it could be that he’s just sitting there having a coffee. If it’s true, Billy will find it hard to justify his continued vendetta. Billy goes and Sharon refreshes Adam’s coffee while they discuss what Billy said to Adam. She’s surprised people think she’s so gullible. He asks her not to take it personally. He’s the one nobody trusts. Except for Nick, Faith, and Victor. It is important to Adam that she sees he’s changed but he’s not trying to lure her back. He always thought she found his wilder side more compelling. She says she doesn’t know where he’d get an idea like that with all the time she spent helping him to become a better person. That’s more what pulled her in. “Sure. Yeah. I see your point,” he says. He doubts Rey even has a dark side so whatever she had for bad boys in the past, “Clearly you’re over it.” She leaves the table and considers his words.

At Victoria’s house, Ashland appears in the living room in a robe. He has to travel to New York to settle his affairs. She imagines he’s also saying goodbye to the life he lived there. He nods. He’d like her to go with him, and she’s happy to. She goes to work and he feels his forehead and shakes his head as if he’s not feeling well.

At home, Lily calls for Johnny to come down the stairs. She’ll take him to camp on the way to her meeting. He claims his stomach still hurts and asks her to stay home with him. She does. They play cards and he asks how Ashland is sick. Lily says he’s not contagious and the doctors are doing what they can for him. She encourages him to talk to her, his mom and dad about this. “I hope you and dad stay together,” he says.

Imani bumps into Nate and Elani at Society. She’s glad to have seen that handsome face last night and again today. She brings up her career advice. Elena knows. She heard from Nate. Imani’s surprised. Elena got some advice from Nate about her career as well. She had a job offer out of town and he told her to stay in GC. Imani’s put in her place and goes to get something to eat. Later, she flirts a little with Nate before she has to go. Once gone, Elena tells Nate she’s hitting on him. He says she’s just a little flirtatious. He’s taken.

At Devon’s place, Amanda tells Devon that Naya is on her way back to GC to recant her confession. They give credit to Imani for breaking free from her grandfather, which is why Amanda feels responsible for her. Moses appears. Devon jokes that he slept so long that there’s no more breakfast. Moses thanks Devon for letting Faith get introduced to Tigrlily. Amanda goes and again, they talk about Faith meeting her favorite band. Devon says when you know what moves someone, it’s a window into who they are. Moses gets it. It’s like empathy. Talk turns to medicine. Devon says he’s not obligated to become a doctor. Moses says it’s different from what he thought it would be like. He’s thinking of checking into other possibilities. Nate drops by and they fill him in. He needs time to think about it.

Victoria sees Adam at the coffee shop. They congratulate each other. She thinks it’s nice for him to enjoy working without their father. Adam says she likes working alone. He finds exposing his illness ghoulish but good for her. She thinks it’s natural that he’d see it that way. Adam says if he had done it, they’d call it predatory. But she’s sweet Victoria who is there to save Ash in his last days no matter how manipulative she’s been with him. She finds his scenario preposterous. He’s just pointing out the irony. She’s more like Dad than she’d care to admit. She thinks he has always underestimated her. Adam flashes to his dream about Victoria telling him the same thing and shivers. “I can get under your skin. That’s good to know,” she says. Later, Elena arrives and is shocked to hear that Rey’s new assignment was to accompany Chelsea to see her mom. They’re shocked but she can tell Rey feels sorry for her. He’s impressed with her progress, he says. He still wants to lay the blame for everything at Adams’ feet and Sharon calls it unfair. Sharon admits she encouraged Adam to let Chelsea go out of town mostly so she didn’t have to think about her any longer and ironically, she’s getting daily updates about the woman.

Billy arrives home with flowers to Johnny and Lily asleep. He smiles at the scene. Later, she puts the flowers in the vase and explains what happened with Johnny and how she couldn’t say no to that adorable little face.

Michael, Amanda, Imani and Naya arrive at Society. He takes Amanda aside and says he hopes Naya will cooperate with the new case into Sutton. He goes and Naya questions if she’s helping Michael go after Sutton. She makes it known that she doesn’t want to work against her father. She reveals the reason she confessed. They both thought she’d get a lighter sentence and that it’d be easier for her to endure prison rather than Sutton. The women are rocked. Naya says she realized it was wrong and it’s why she recanted her confession but she still can never believe Sutton is capable of murder and won’t implicate him.

Victoria arrives home to Ashland passed out on the floor. She wakes him up and he thinks it’s a bout of anxiety. He’s had it before. He’ll get some medication. Victoria worries that the merger is a mistake.

Adam goes to work and calls Victor, who is in Milan. They make small talk.

Coming up next week!

Chloe starts work at Newman Media and Adam welcomes her on her first day.
Nikki visits with Summer and asks if she’s truly happy in Milan or simply resigned?
Sally talks to Jack on a date. Given the lovely evening they had and feeling so connected, she asks where they go from here.
Mariah is locked up! “Look, as much fun as this stay has been, me and the baby would like to get out of here now, please.”