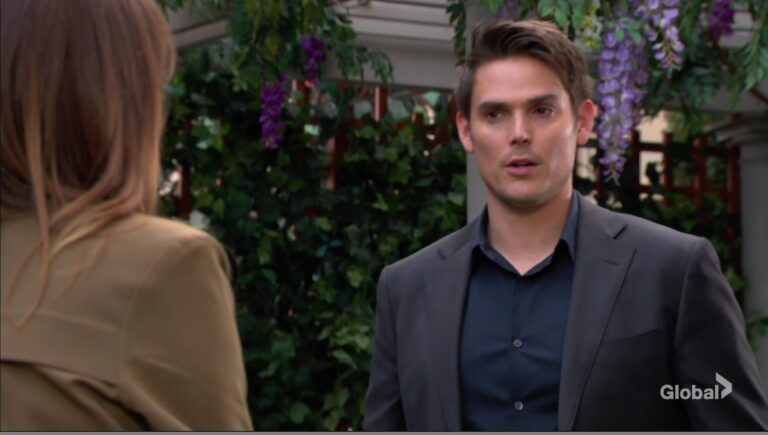 This is the Canadian Y&R day ahead recap from the Wednesday, June 9, 2021 episode, which airs in the USA Thursday, June 10. In the previous episode, Sally asked Tara to help break up Summer and Kyle, so she could keep Kyle for herself, and in today’s episode, Chelsea worries about her relationship with Connor, Ashland renounces his demands, and Michael wants Rey to discuss Chelsea.

In Victoria’s office, Nikki pressures her daughter to give her a hint about the secret she’s keeping. It sounds as though she has been invited to New York City by a determined man. Victoria refuses to discuss it but Nikki is reminded that Ashland Locke asked her to lunch previously. She deduces that it was him. Victoria admits it. They’re friends. Nikki doesn’t think he’s pursuing her as a friend. They work and then Nikki again pressures her daughter to fess up. Nikki doesn’t think she should start something with the man. She has a problem with how Ashland does business. Victoria rolls her eyes. “Have you seen who you’ve been married to all these years?” Nikki thinks Ash might be using her. “Not everything has to be this deep codependent relationship like the one you have with Dad,” she says. Nikki gripes, “I’m going to pretend you didn’t say that.”

In the Abbott mansion, Ashland wants to see his son. Tara asks him not to cut Kyle out of her son’s life. Ashland says it’s easy. She does that and gets money to live on. Kyle has a meltdown. He doesn’t see why Ashland can’t still be a parent, instead of forcing Kyle out of his son’s life. Ash learns that Harrison has been told. He has decided to retract his ultimatum to keep Kyle out of his son’s life. Instead, he’ll share custody, but if Kyle wants to see Harrison, it’ll come out of Tara’s time. He won’t stand in Kyle’s way. Tara’s surprised. She and Kyle call it fair. Tara takes Ash to see the kid. THey return and Ash says Harrison treated him with love and affection. “Then he gave me this.” It’s a rock. They give them to each other. Ash will make sure Harrison will be taken care of and her alimony will be less than what it would have if she hadn’t cheated. “If I hadn’t cheated, we wouldn’t have had a son.” Ash goes and Kyle asks if they can trust Ashland.

At Crimson Lights, Michael is upset that Rey’s taking time off. He concedes that Rey and Sharon deserve a second honeymoon, but first, they need to discuss Chelsea. They agree that it’s possible that Chelsea had help with her master plan to poison Rey. It seems unlikely that she could have done it alone. Rey will do his best to find out who did and hold them accountable. Michael doesn’t want to arrest his own sister-in-law but he knows if anyone helped Chelsea, it was Chloe.

In the psych ward, Chelsea asks when Connor can visit. Adam thinks they should wait until she feels better or is out of this place. Chelsea accuses him of wanting to keep her son away from him and poison his mind against her.  Adam denies it and she throws him kissing Sharon in his face. He’s sorry that happened. Adam reminds her she didn’t take time out to text Connor when she was able to. Instead, she texted Sharon, pretending to be him. He wants to think that she was being a good mother by not doing this. She paces and rants that she’s tired of people thinking she’s crazy. “The truth is the sanest thing I’ve ever done is to…” She catches herself and Adam asks her to continue. She covers. “Coming here is the sanest thing I’ve done. It’s been rewarding.” She reveals she’s getting clarity. He’s glad to hear and promises she can see Connor as much as she likes once she’s out. Chelsea warns that he’d better not be playing her. Rey shows up and Adam tells Chelsea that he gets the sense that Rey’s after something. Adam assumes Rey has doubts about her. Adam wants to protect Chelsea. This surprises Rey, who asks, “From what?” Adam says, “Harassment, coercion.” Once he’s gone, Chelsea asks if she should be suspicious. Rey denies it, then asks how she did this whole scheme. He asks for the logistics and Chelsea jumps, thinking he doesn’t believe her. She kicks him out.

Adam finds Chloe in the park and asks her to visit Chelsea. He asks if she’s given thought to his offer to work at Newman Media. Chloe thinks it’s him trying to make amends. Adam doesn’t deny that but it is a real deal. She agrees to it.

Sally sits with Ashland at Society. He asks for time alone and she grins. They had a deal. If the information she gave was useful to him finding his son, he agreed to call the right person and Summer will leave Genoa City for her dream job in Italy. Kyle would go with her. Ash is only an investor at Marketti. If the CEO wants to hire Summer, hell convince the other investors to support it. He gives her a name. “Eric Forrester. Give him a call.”  He goes outside and calls Victoria again to ask her to go to New York. She agrees to it.

At the coffee house, Rey finds Michael and fills him in about how unglued Chelsea became. Her reaction was defensive as though she was lying when he questioned if she did it alone. Rey still says justice is concerned. If Chloe helped her he doesn’t think he’d go as easy on her.

Chloe visits Chelsea, who rants about Rey’s questions. Chloe worries he’ll keep digging and she’ll be caught. Chloe tells her about Adam’s job offer. She took it. And when Chelsea’s out, she can work there. Chelsea thinks this is the worst decision. It’ll mean Adam is controlling her. Chelsea needs to find a way out of there.