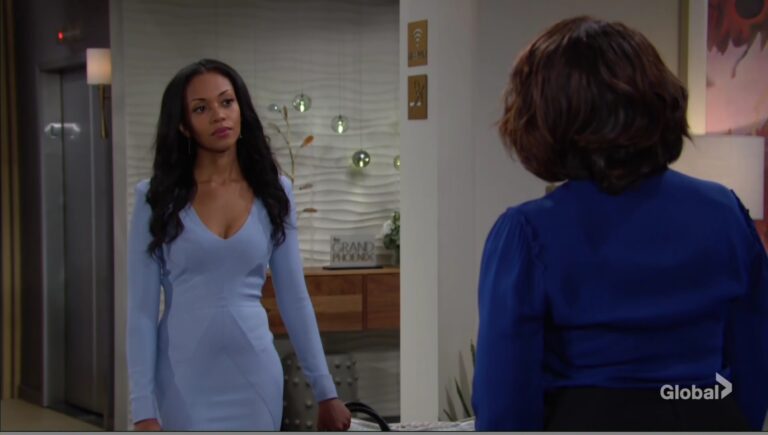 This is the Canadian Y&R day ahead recap from the Monday, June 14, 2021 episode, which airs in the USA Tuesday, June 15. In the previous episode, Ashland revealed he’s dying and has six months to live, and in today’s episode, Victoria denies Ashland a kiss, Billy has the kids over, and Rey and Sharon head out on their second honeymoon.

The kids race around at Lily and Billy’s new condo and ask how much screen time they get. Billy reveals the rule there are the same as ones at their mother’s. Johnny asks if his father has married Lily. He tells his kid no, but they’re happy. They love Lily. She loves them and sends them to their room to find their surprise. They race off and Billy hears them playing drums and keyboard. He asks them to keep it down and then looks for a text from Victoria. Lily’s surprised. Is he trying to protect her? He admits he is because she’s always had his back and Billy knows who Ashland is. He’d do this for Lily, too. They play a game with the kids and once they’re out of the room, they discuss their separate paths leading them to each other.

In New York, Ashland tells Victoria he’d very much like to kiss her. “A dying man’s wish.” She laughs. “That’s funny.” He realizes nothing fazes her. “Not yet.” She agrees but doesn’t do impulsive. She thinks they should proceed carefully. He smiles and says, “Sold.” He’d glad they’re moving forward and sips his wine. She’d like to see where this takes them but he calls it a short journey. She asks why he makes jokes about it. He doesn’t wallow and thinks he may as well have a laugh or two. She urges him to get treatment so his kid could have more time with him. Ashland says if she keeps talking like that he’ll think she doesn’t want to lose him. She reminds him they agreed not to go there. He wants to offer more wine but she declines and wants to call it a night. He misses his son so will go back with her. He thanks her for salvaging his trip and goes.

At Crimson Lights, Sharon talks to Rey on a call about their second honeymoon. She disconnects and sees Adam across the room. They lock eyes. He comes to get a drink and they discuss Noah possibly doing business together. She’s happy about it and can see he is as well. It’s like a reboot. “One day at a time,” he says. Sharon notes that Faith says that a lot. Adam thinks it goes for her and Chelsea, too. He’s counting the minutes until he can see Connor. He realizes he’s opening up to her and doesn’t think it’s a good idea. Sharon disagrees. Adam overheard her talking about her trip and thinks she and Rey deserve happiness. “You deserve peace, too,” she tells him. He goes.

Rey visits Chelsea in the psych ward. He’s going on his trip and didn’t want to leave things the way they were. She’s glad and apologizes. She calls herself unfair. Adam was there and she felt irrational. Rey gets it. “He has that effect on people.” She tells Rey about what she does all day in group and in therapy and cracks jokes about some of the people in there needing therapy. He asks why she got so upset yesterday. She insists it had to do with Adam. Hedges interrupts. She has a session with Dr. Kerrigan. Once she’s gone, Rey has questions for Dr. Hedges. He asks if Hedges is happy with her improvement. Hedges tells Rey he’s not seeing the big picture, but Rey tells the doctor that they’ve been having long conversations as though they’re in a coffee shop. The doctor’s nervous and says he has an appointment. Rey narrows his eyes and once he goes, Hedges warns Chelsea.

Victor meets with Amanda in his office to discuss her relationship with Sutton. Victor met him and calls him formidable. She agrees. He reveals he knows he’s her grandfather. He summoned it up from something he said. She admits it’s true and reveals she’s also Richard’s daughter. She didn’t know he was aware of her existence until their meeting. Victor learns that her childhood was similar to his.  The blackmail angle is still a part of her case. Victor doesn’t think it happened and offers to send her the report on it. Victor assumes this is overwhelming though she’s hiding it well. She agrees it is. He hopes she gets to the bottom of what happened to her dad. She goes and Adam appears. They discuss Billy Abbott again and eliminating the competition. Victor doesn’t want Locke in on this but Adam says Locke’s occupied with Victoria — in New York! Victor’s rocked. Adam tells him about Nikki’s visit. Victor winks and knows she’s protective of him. Later, they debate why Victoria left town with Locke, and Victor leaves his daughter a message asking what the hell she’s doing. Victoria sees he’s called and ignores him and makes a call to get someone to do research for her on everything they can find out about Locke’s businesses.

In the lobby at the Grand Phoenix, Naya meets Amanda. She spoke with Sutton and he doesn’t want her to leave the legal team. He’s only resistant to making private family business public. Amanda still doesn’t get it. It doesn’t compare to spending life in prison. Amanda wonders if Sutton’s got a secret. She asks if they’ll uncover more family secrets. Naya doesn’t think so. “What would he be hiding?” Amanda says, “You tell me,” and Naya looks shocked by the question. She still thinks the personal shame will ensure he can’t come clean. “The man holds family above all else.” Amanda cringes hard and finds that strange, considering. Amanda says she’s done. There’s nothing Naya can do to change her mind. She leaves and runs into Devon and takes off upstairs. Devon gives Nana side-eye and takes off after his girlfriend. Upstairs, Devon’s proud that she quit but tells her she’s not alone in this. That means everything to her. He goes and she calls Denise, the PI to ask her to investigate why her father was really killed.

Rey shows up at Crimson Lights. Rey can’t wait to go on the honeymoon. It’s all he’s been thinking about, Sharon wonders. “No, sometimes I think about cheeseburgers. And tamales,” he jokes. She hopes he’s prepared for all of the kisses she’s going to give him. He’s all for that and they take off for their flight.