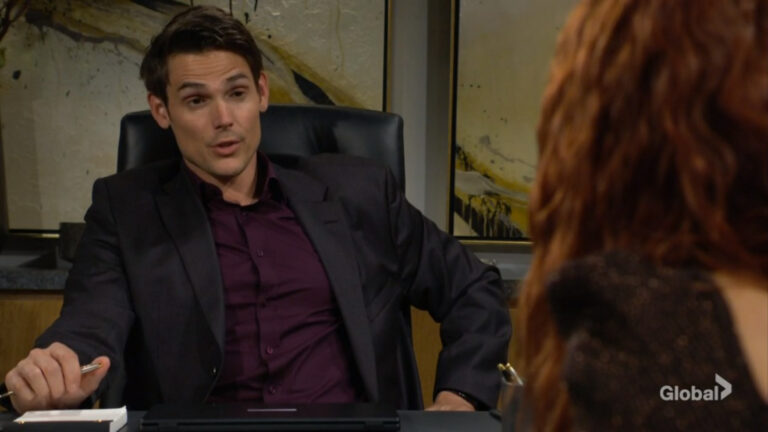 In this episode of CBS’ The Young and the Restless, Sharon returns from Rey’s memorial, Nikki worries about her daughter’s feelings for Ashland, and Nick accepts Locke’s donation. In the previous episode, Chelsea wondered about if she could have had a future with Rey, and Michael bumped into Diane.

Sharon returns home and Faith welcomes her. As Nick brings in the bags, Faith wishes she’d gone with her but her mom insists it was best to go alone. She will tell her about the memorial later but they need to focus on the wedding now.

Nick asks for a moment alone with Sharon. He tells her that someone wants to make a major donation to New Hope in Rey’s name. She thinks that’s amazing until he explains the donor is Ashland.

He assures her the donation will be anonymous. Sharon tells him to take every dime he can get, no matter how much they hate Ashland. This is nothing less than poetic justice.

At home, Mariah and Tessa go over their wedding list. Mariah thinks everything has been taken care of. They run through it and can’t wait to recite their vows. Suddenly, Mariah realizes Kyle never agreed to officiate.

Tessa says they can just get Devon. Noah shows up. He has something to show them. After he’s taken them on a tour of how he has set everything up, they return amazed and declare it is “beyond.”

They tell him about their problem with an officiant. Kyle pops up to talk about just that. Tessa ushers Noah out.

Mariah knows Kyle has a lot on his plate with his mother. He was planning to return to Milan last night but remembered his promise to her while he was packing. She can understand why he wants to go.

He explains that he talked to Summer and she’s coming to Genoa City. Mariah is thrilled, but he’s afraid he will let her down. He’s in a messy headspace.

She gets that but suggests being part of tomorrow would be the perfect chance to clarify things for himself. She’ll never forget what he did for them. This would be the magical completion of the circle.

He gives in and agrees. They hug and he tells her he’s honored. She knew it was meant to be the second she saw him back in Genoa City. They already have a script for him.

Kyle may want to add a few words of his own. She offers to have his back with his mom.

Downstairs, Noah tells Tessa he hopes this is the most extraordinary wedding ever. She can’t wait for the guests to see what he’s done to the tower.

They are glad they’ve worked through their awkwardness. He will always love her as a friend and the woman who makes his sister happy.

Faith and Sharon drop by the apartment. Everyone worries about Sharon but she wants to power through. She tells them about how lovely and emotional Rey’s service was.

Rey’s family had lots of nice things to say. Lola is sorry she can’t make it to the wedding. Sharon doesn’t want to talk about that anymore and just wants to focus on the wedding.

After they explain everything that is in hand, they say the gift backs still need to be completed. Sharon has brought them face masks and bubble bath to pamper themselves with today.

She assures them they will have the perfect wedding tomorrow. All they need is tomorrow. Sharon and Faith leave to stuff bags and Noah goes off to finish decorating the venue.

Mariah and Tessa look forward to bonding their lives together forever.

Victoria runs into Ashland at Crimson Lights. She brings up his charity offer to Nick. He’ll be meeting with her brother about it later. She says that the money could do good in the right hands.

It would be hard for her to believe he doesn’t have an ulterior motive. He assures her his motivation is guilt. He wants to pay back for what he did to her family and for Rey’s death.

Sally shows up in Adam’s office at Newman and asks if he is planning to leave the company. Once he gets her to close the door, he explains that he can’t walk away from his family or the chance to run the company some day.

If he leaves now, Victoria wins. Sally will support whatever he decides. “I want Newman Enterprises. Every single bit of it,” he says. She says that’s bold and she’s all in.

Adam claims he has the perfect plan and Locke remains the key. That confuses her. He explains that his father still despises Ashland and his sister is still struggling with what a monster her husband is.

He thinks they need to help reignite the romance. She thinks this plan is intriguing but risky.

Adam explains they will have to be extremely subtle. They don’t have to make any deals or do anything overt. All they need to do is plant some seeds. Clearly Ashland is already working on winning his wife back.

Nikki drops by her daughter’s office. Victoria is distracted. She ran into Ashland and told him about Rey’s heart attack. Nikki senses she’s “haunted” by her feelings for her husband.

Victoria claims she has pushed all her residual feelings away. Her mother suggests she’s pushed them down and she needs to deal with them before they eat her up inside.

Admitting part of her still loves Ashland, she tells her mother how mortifying that is. Thinking that he might have actually fallen for her just makes her feel weak.

Her mom tells her this is all perfectly reasonable. Locke’s love always seemed so sincere. Maybe his love for her is the only true thing about him.

Victoria says nothing could undo the wrong he did to all of them. “What about saving your life?” Nikki asks.

Nick meets with Ashland at Society. He agrees to accept his donation to New Hope as long as it remain anonymous… but this doesn’t mean they are cool. Locke didn’t expect that would change.

Ashland makes it clear that he is not leaving town but he has no plans to hurt Victoria more than he already has. The donation is only a first step to making amends.

Nick puts him on notice. He and the rest of the family won’t let him manipulate Victoria again. Locke makes it clear that he doesn’t intimidate him. Nick threatens the family will get more creative and extreme next time he tries anything.

After Ashland calls to put the money transfer through, Nick says at least one good thing will come from his lies.

Sally and Adam sit at a table. When Nick walks off, Adam turns to Locke and tells him that giving away that money was quite a power play. He wonders if it’s supposed to be an overture to win Victoria back.

Ashland tells him that what he wants or plans is none of his business. They bicker about the deal they made. Locke insists that he has upheld his part of it. Adam worries that his sister is still hanging onto the fantasy of the guy she fell in love with.

After Locke leaves, Sally tells Adam that he played that well.

Adam returns to work and bursts in on Victoria and Nikki. After bickering with his sister, he explains he won’t fight her on her decision to take on Nikki as her Co-CEO.

He congratulates Nikki on her new position and says he will be focusing on Newman Media. Once he leaves, the ladies wonder what that was all about. Victoria needs some fresh air and walks out.

When Victoria heads to Society, Sally approaches her at the bar to say she’s sorry for all she’s been through. She’s been wanting to speak to her and offers to buy her a drink.

Nick returns to Sharon’s and tells her the deal with Locke is done. She looks forward to all the good work that will be done in Rey’s name. Sharon just wants to get into making gift bags.

Nick asks her how she really is. She tells him Miami was hard but everyone bonded over their grief and said goodbye. Arturo’s little boy didn’t understand what was going on.

Sharon says that’s a reminder they need to celebrate what they have and recognize life goes on. Nick is proud of how strong she is. She says they always make it through. This wedding and its affirmation of life couldn’t be coming at a better time.