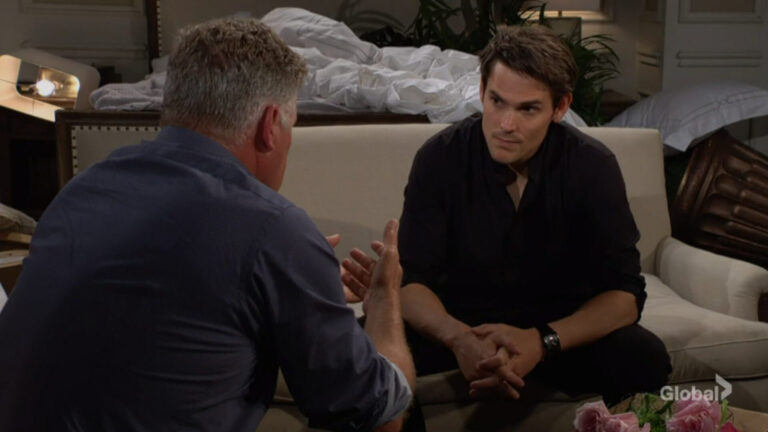 In this episode of CBS’ The Young and the Restless, Sally is shocked to keep her job, Nikki, Phyllis and Ashley scheme to get rid of Diane, and Allie admits to Jack that she’s a bit overwhelmed. In the previous episode, Adam broke Sally’s heart, and she made an emotional plea to Nick and Victoria to save her job.

Packing up her office, Sally tears up as she looks at a photo of her with Adam.

Victoria and Nick enter. She offers to let them check her box to see if she’s stealing office supplies. To her shock, they announce they have decided to keep her on…at least in the short term.

Squinting, she asks what the catch is.

They think some of her ideas have potential so they want to give her a chance to see them through. She has 90 days and then they will review her performance and decide whether they will keep her on.

Sally is happy for the chance and can handle it without Adam. Victoria reminds her that this about more than pride. People’s careers and lives rely on the company. Sally is confident and promises they won’t regret this decision.

Victoria suggests she promote someone from the company to be her COO. Spectra announces she’s already offered the job to Chloe. Nick’s eyes bug. Victoria thought she would hire someone with relevant experience. Sally makes her pitch.

They shrug and accept it. “You and Chloe can rise or fall together,” Victoria says. The siblings offer to help her any way she can.

They want to take an active role supporting her and hope she hasn’t taken everything Adam said to her about them seriously.

Victoria says she’s better off without him. Sally plans to make the most of this silver lining from her breakup. After they exit, she sits down and has to breathe deep.

Jack walks in on Noah and Allie kissing at the Abbott estate. They tell him about their day at the pool and he reminds them he has one outback before walking off. They laugh about how awkward that was. Noah is sure it’s nothing to worry about.

Noah would like to spend some more time with her. He makes some suggestions but she thinks he’s procrastinating telling his father bad news and she has work in the morning.

When she claims she doesn’t Jack to get the wrong idea, he asks, “Jack or me?” She assures him she just feels like her life is changing very fast. They agree to meet on the rooftop later and kiss again.

Once he’s gone, Jack sneaks back in and teases her. He’s glad that she’s having fun, but senses she has doubts. She assures him that everything is so great it’s overwhelming.

Allie says Noah has been very sweet and she really likes him.

She doesn’t know what she’s acting like a teenager. He says love can do that, not that he’s saying she’s in love. He’s just happy to see her happy.

As she sits alone, she flashes back to kissing Noah and smiles.

Noah wanders into Crimson Lights looking for his father. He only finds Sharon, who suggests that he call and arrange to his Nick. She’s sure he’ll feel relived to get it over with and asks him to fix the espresso machine.

She notices he’s unusually cheerful. He tells her something great is going on.

Nikki, Ashley, and Phyllis gather at Society for the first meeting of the Disappearing Diane Club. Nikki reminds them this is a dire situation. As they sip their drinks, they wonder how to jettison the Jenkins.

They realize that Kyle could be the key. Maybe they could convince Summer to change his mind about his mom? Phyllis doesn’t think that will work.

What happened with Jack comes up and Ashley tells her that she doesn’t blame her for what she did.

Nikki gets a recap of the situation and they continue to discuss how hard it is to get through to Summer. Nikki wonders if Jack might be a better bet.

Ashley is skeptical. She thinks he has complicated feelings for Diane.

This makes the other women worried. They lose it when she explains Jack seems willing to give Diane a second chance. Ashley makes Phyllis promise that she won’t go off the deep end.

Ashley says they will need evidence to change people’s minds. Nikki admits that her investigators have come up empty so far. As they discuss Diane’s relationship with Allie, they wonder if she understands how dangerous Jenkins is.

As the meeting ends, Nick and Victoria wander in, disturbed to see the trio together. They guess something is amiss. Last time they were together they were hiding a body.

Nikki’s allies run off and she refuses to explain anything to her children.

They surprise her by announcing they are giving Sally a chance to prove herself. Adam dumped her and she has good ideas. Nikki wants to hear more about that later and takes off.

Victoria tells her brother that she’s concerned about how emotionally unstable Adam might be right now.

As they sit down, he wonders how Summer will react to Sally keeping the job.

He assumes they’ve made the right choice but wonders if Adam dumped her so she would keep her job.

Adam knocks on Ashland’s door at the Athletic Club. When there is no answer, he asks a maid if she can let him in, claiming he’s worried about his friend who has a heart condition. She opens the door for him. They discover the suite has been trashed.

“Your friend must be a troublemaker,” she says. Locke pokes his head in. Adam asks if they should call the police. Ashland hands the maid some cash, apologizes for the mess, and promises to clean it up himself.

Once she’s gone, he tells Adam he was in jail.

The Newman guess this was tied to the restraining order and he got screwed over by Diane. Locke is sure Victor was behind it from the beginning.

Adam wonders what he intends to do about this. As they pick up the furniture, Locke suggests he leave. Adam warns that his family will leak his arrest and destroy what’s left of his reputation.

They’ll probably come for him when they are done with Ashland.

Locke guesses he’s rooting for him to tear the Newmans to shreds and urges him to cut to the chase. Adam needs an ally right now and it’s over with Sally. Ashland wonders if Adam is just trying to pull what Diane did.

Adam is adamant that he is finished with his family. Locke reminds him that Victoria said the same thing to him before she took all his money. He doesn’t know what to make of his proposal that they pair up.

If Adam was in his shoes, what would he do.

“I would wreck everything. I would burn it all down to the ground,” Adam says. Locke needs something more specific so Adam reminds him of his history of dismantling corporations and sending their founders flying.

Ashland explains that was business. This is personal so he’s going in a different direction. He’s going to give Adam plausible deniability and not tell him anything.

Clearly, the company is not the most important thing to Victor, Victoria is.

He says they are not working together. Adam suggests they talk this through but Locke shows him the door.

Adam heads to Victoria’s office but she’s not there. Sally calls but he won’t pick up. She leaves a message repeating that she doesn’t want the job if he only broke up with her son she could keep her title.