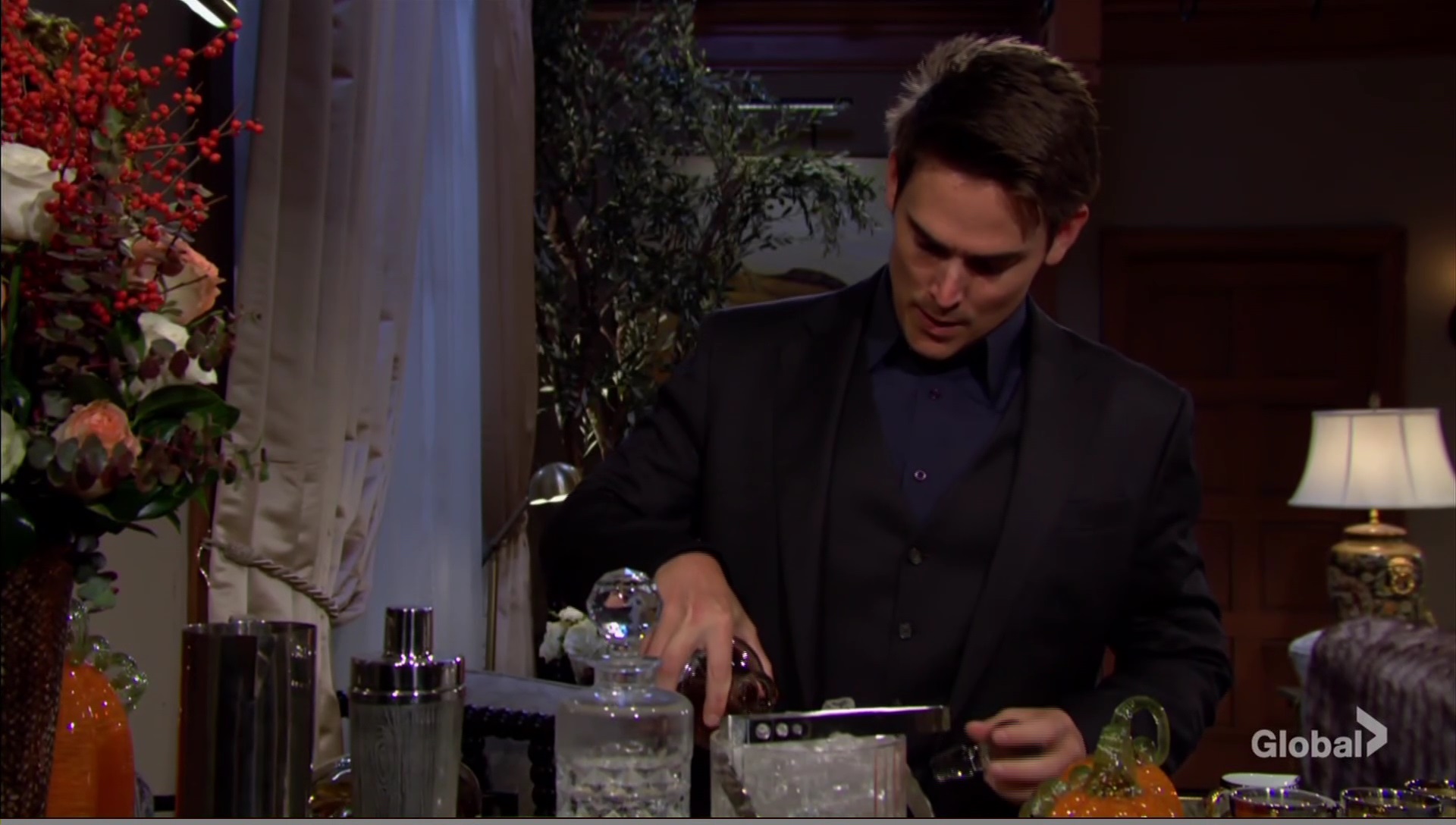 Soaps Spoilers has the Canadian Y&R day ahead recap for Thursday, November 4, 2021 episode, which airs in the USA Friday, November 5. (Recaps live by 5:45 PM EST daily.) In the previous episode, Gaines reveals how he escaped kidnapping. In this episode of CBS’ The Young and the Restless, Phyllis worries that Sutton will go after Amanda, Nick tries to get back in Victoria’s good graces.

From Society, Victoria leaves Abby a long message to check on her. She tells her she loves her and sees Nick sitting at the bar. It’s awkward and he asks if she can sit and talk. She gives him until her order comes. He tells her he’s hurting over their disagreement, his renewed feud with Dad and issues with Phyllis. He always turned to her when his back was against the wall. “You were like my secret weapon. You were always there for me.” He hopes she feels that way about him. He felt it was the two of them against the world and misses that.

She tears up. She calls him trustworthy and compassionate until he wasn’t. He attacked the man she loves. He wishes he’d handled things differently. She says he hurt her. They were so close and what he did to her was painful. He didn’t mean it as a betrayal. He told her he had questions about Ashland and he was trying to protect her. She doesn’t like the way he went to dig up things from his past, which was something Dad would do, not Nick. Nick agrees, he should have left it alone and trusted that she was strong enough to deal with it. She wishes he’d come to that realization sooner. He admits he wouldn’t do it over again. He wanted to tell her how beautiful she looked, he’d have been in her wedding pictures and danced at her wedding. They can’t go back. She agrees. He asks for her understanding and trust. They talk about him fixing things with their dad and he’s not interested. He wants to fix things with her. Victoria asks how things are with Phyllis. Nick doesn’t want to talk about her right now. Victoria’s surprised he doesn’t want to trust her to discuss it.  She’ll try forgiveness. She thinks they’ll need to depend on each other as a family soon enough. he asks how he can regain her trust. She says he can tell her about what’s up with him and Phyllis. “I think it’s over. This time for good.” She’s sorry he’s suffering. She thinks going after her hotel was petty of her. They’ll never be friends but Victoria regrets threatening her livelihood. Nick admits their problems started then. Victoria calls life a gift. Squandering the gift seems cruel and senseless. Nick thinks that Ashland’s crisis must have put things into perspective for her. She says at least partially and won’t denigrate what he and Phyllis share. Vicki thinks Phyllis may be the one who can make and keep him happy. “You aren’t the only one,” he says.

Phyllis and Amanda arrive at Crimson. They order coffee and Amanda tells Phyllis she’s testifying against her grandfather tomorrow. Phyllis is sorry. She’s been so preoccupied with herself. Amanda tells her about Sutton secretly recording their conversation. She details what happened and how he asked for mercy. Amanda has none. Phyllis offers to get the recording for her.  “You’re the best,” Amanda says. “I’m the worst,” Phyllis corrects. She says she took care of it herself. Phylis is amazed and calls the man dangerous. She hopes Amanda’s being careful. He did everything he could to take out her father. “What makes you think he won’t do the same to you?” Amanda isn’t worried. She tells her about Chance being presumed dead. Phyllis is surprised Nick didn’t tell her. She’ll keep quiet and thinks it puts her problems into perspective. Amanda asks what she’s getting at. Phyllis admits things between her and Nick are over. She talks about the pain. What will she do? Phyllis will eat, work, sleep… Amanda asks her to go on a Vegas together. They love that idea. Phyllis says she and Nick have broken up so many times. She only has herself to blame, she admits.

At the ranch, Adam talks to Nikki about going to the Chancellor manse to see how Abby’s doing. It upsets Nikki and she begs him not to go over there. He asks what’s up. “Can I help?” Adam’s mouth drops open as he learns that they’re afraid Chance may have been killed. He’s shocked. Nikki explains they can’t find his body and it isn’t likely that he made it out, given the devastation of the state the building was in. She apologizes for being so blunt. She knows he and Chance had a bond. Adam says it doesn’t make sense. He saved his life. “I thought he was invincible.” Adam gets a drink. He wishes he was as good of a friend. Adam tries to think of him when he is close to backsliding. Nikki asks him to keep quiet until they get official confirmation. He’ll honor that. She admits she believes that and finds that he’s been very loyal to the family. She hopes it’s permanent and he won’t hurt them again. He nods and then tells her he’s really trying. She thinks he’s been successful and she’s hoping for the best. She heard things that gave her pause, such as him and Victor plotting something that could have dire consequences. He realizes Nick told her. He sighs. He doesn’t know what he has to do to prove he’s on another path. Exasperated, he says he doesn’t care. He’ll do what he can to be the man he’s always meant to be. He goes and Nikki seems satisfied.

Billy returns from driving Gaines to the hotel. Lily has a bad feeling about this. She wants to drop this and calls Gaines trouble. She doesn’t believe his escape from Tuscany. He wants to be proactive and threaten Adam and Victor to publish the story. Lily tells him they don’t blackmail. “That’s not how we operate.” It isn’t her goal to take them down. Lily asks if he spoke to Victoria about this. He admits he has but she doesn’t want to meet with him. He won’t run to his ex to get her help in protecting his company.

Adam arrives at Society. He is glad to see Victoria and Nick getting along. His PI arrives and he excuses himself. Nick wonders to his sister why Adam’s with Dad’s PI. They must be plotting something. “That’s nothing for you to worry about,” says Victoria. He can see she knows what’s up. She has some idea but doesn’t know details and doesn’t think he’ll want to get involved, either. He reminds her he likes getting involved. She tells him it’s something to do with a move against Chance Comm. She’s ensured her kids won’t be impacted. Billy lashed out first. He’s not defending Billy’s actions. He’s grateful she seems to be giving him a second chance. She’s glad they talked and thinks they’re one step closer to being okay. They smile and her food’s there so she goes. Adam appears once the PI leaves and Nick questions what he’s up to. He shrugs it off as Newman Media business. They get into it a little and he doesn’t think now is the time. Nick asks what that means and Adam realizes Nick doesn’t know. He goes.

Phyllis arrives at the hotel and starts to text Nick to see how he is. She deletes the text. Meanwhile, he’s sitting at the bar looking at her phone number on his cell phone, thinking of her.

Adam goes to Lily. “I’d actually like to make you an offer.” Lily says, “So you are willing to negotiate.” He’s talking about a job offer.
Amanda tells Michael, “Did my taking the stand achieve what we’d hoped? Do you think my grandfather is one step closer to being convicted?”

Abby tells Christine, “Maybe Chance wasn’t in that building when it blew up. Now that I know where that safe house is, I’m flying to Spain and piece together what became of my husband!”