Abby Learns Chance is Alive and in a Bad Way, Ashland Sues Billy and Lily — & Rey Plays a Recording of Billy Blackmailing Adam 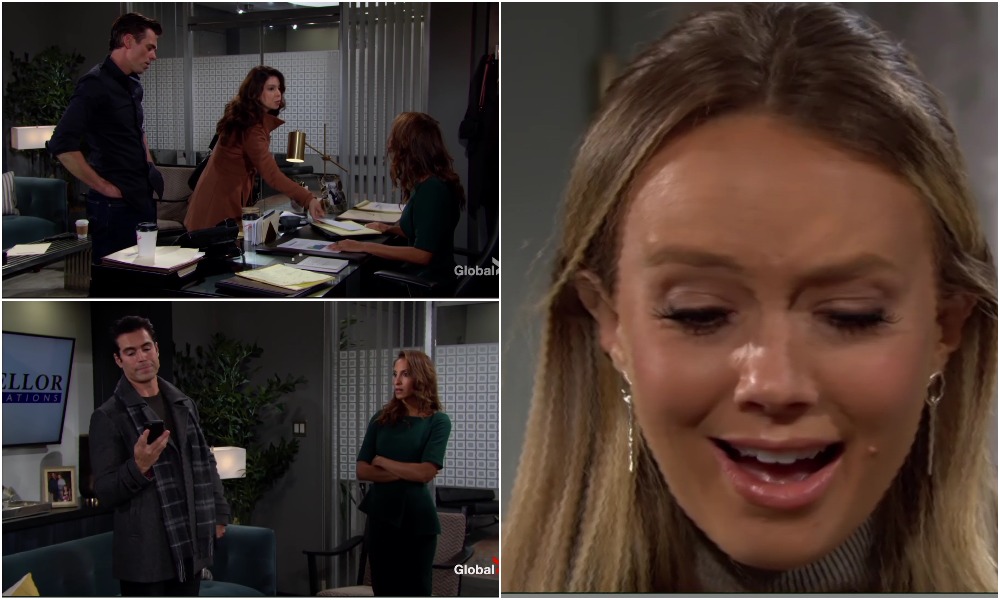 Soaps Spoilers has the Canadian Y&R day ahead recap for Wednesday, November 17, 2021 episode, which airs in the USA Thursday, November 18. (Recaps live by 5:45 PM EST daily.) In the previous episode, Mariah reacted to Devon being Dom’s caregiver. In this episode of CBS’ The Young and the Restless, Abby learns that Chance is alive, and in Spain, while Rey shows Billy a recording of him blackmailing Adam, right before Lily and Adam are sued for libel.

Abby talks aloud at the hotel suite that she had to get out of her house because everyone was treating her like a piece of glass. She takes out a box filled with memorabilia of Chance, thinking it’d help feel his presence. She picks out pieces and remembers him talking about his time in Iraq and how he downplayed it.

She looks at some photos and doesn’t know who the men in the photos are. He didn’t tell her about his time there. She can’t help but think he’s out there, alive. She hopes his belongings will bring him to her. She asks how he can leave her. She holds a medal and thinks back to him saying that the “medics were the real heroes in that field hospital.” She looks at the names on the photo Errol and Kim Dunaway who treated him like their son. They deserved the medal. She recalls him saying he kept in touch with them and that they treated him like family. She looks through some mail and finds their address in Spain. she gets the number and calls, telling the woman who she is. She asks if they had contact with Chance. The woman tells her she has the wrong number. Abby asks if she knows that he has a son. The woman claims she can’t hear her and disconnects. Abby calls back, thinking this is a clue. Nobody answers and later, the woman calls her back and explains she is Kim and that Chance is there. He’s alive but in a bad way. Abby smiles and laughs incredulously.

At ChanceComm, Lily’s ready to hit publish on their retraction. Billy stops her. She plays with her hair and says she’ll read what they wrote again. She reads that they didn’t intend to publish that expose on Ashland Locke and were illegally hacked. The article was published without their knowledge or approval and that they’re investigating the security breach.

She thinks this covers them but Billy thinks they can stand by the story and stick it to Locke. Lily doesn’t want that. They need to publish this. She hits publish and tells her beau they did the right thing. Rey arrives. He agrees. He tells them that Adam accused them of blackmailing him. He saw the article go live. Billy says his email was hacked and the article went live without their knowledge.

Billy tells the detective it was taken out of context. He didn’t give Adam authorization to record him. Rey says there’s a video of Gaines. Lily stops him and asks what he wants. Billy asks if he’s under arrest. He’s not but needs to investigate and asks for proof of the Newman’s infiltrating his email. Billy says their IT team hasn’t figured out how they broke into their email. Lily calls it a calculated move against them and accuses the Newmans. Rey needs proof and until then, his hands are tied. He goes.

At Newman Media, Adam reads the retraction as Locke waltzes in. They smile over what they pulled off. Adam’s glad to see Locke who looks energized. Locke admits he had the full regiment of treatment of the experimental protocol Peru. He and Victoria are feeling positive. Ash kept up with what they’ve been up to. Adam says the next step is his. Ashland set it in motion. He almost feels bad kicking Billy when he’s down. They smile. When Billy calls and tells them they made their point and asks what they want, Adam grins. Adam calls it a blunder to publish that Locke article. Billy asks him to admit he hacked into their system. Adam feels for him. He never should have trusted Gaines. He says never rely on a blackmailer. That’s one of those fast rules he lives by. He advises them to get out of the business. He calls the retraction more embarrassing. He offers to take the company off their hands. They’ll pay a decent price. Billy tells Adam that’s not going to happen. Adam thinks they’ll lose subscribers and that their ad sales will go down. He thinks they will be buried in lawsuits. As they’re talking, a woman serves Billy and Lily. “Locke is suing us for libel.” Billy tells Adam, “The gloves are off, do you hear me? They’re off!” He disconnects. They want to get a Neman on their side and ponder if Nikki’s in on this. Billy leaves a message for Victoria to call and tell him what Ashland’s motivations are and if she’s on board with him trying to destroy ChanceComm.

At the ranch, Victor thinks it was a good idea that Abby went to Devon with the baby to care for. He thanks Devon but thinks it’s putting a lot of responsibility on him. Devon’s up for it. He laughs and says he’s happy to care for him while Abby takes care of herself. The nanny will come.

They’ll be fine. He’s worried about Abby taking off. Victor doesn’t think she’s thinking clearly. She hasn’t responded to his texts. Nikki appears and they tell her that Abby took off and is missing. She worries and asks Victor if he can look into it. Both men will do some digging. Victor goes and Nikki calls Devon kind and brave to look after Dominic. He doesn’t have to do it alone and should ask if he needs help. He’s not alone. She says it takes a village but he tells her the nanny will be over. Nikki offers herself as another resource. He’ll call if he needs her.

At Crimson Lights, Faith and Moses talk about Abby taking off and leaving the baby with Devon. Faith gives him that Abby lost Chance and that she’s so devastated that she can’t take care of her baby. He smiles and says the baby’s doing fine. Devon’s in full dad mode. Faith worries Abby will never get over this loss.

At Crimson Lights, Rey talks to Sharon about his case a little. He leaves out names but she can tell who he’s talking about. He admits it’s true and neither look innocent. There’s evidence of a crime and Billy countered it but there’s no proof yet of what Adam has done. Rey doesn’t want to arrest Billy until after he talks to the DA. He’d like to end this war between the men. Sharon suggests it isn’t his job to find a peaceful solution.

Nanny Louise talks to Devon about caring for the baby. He thanks her for being so flexible while the baby is here. He tells her to take her time today. He’s not leaving for a few hours. She goeos and Devon reads a letter he finds on the floor from Abby who says that knowing Dom is safe with him is the only way she can do this. She does need to do ‘it’ for herself and Dom. She asks him to tell the kid she es him more than anything in the world. She’s afraid this is going to take longer than she thought. Devon wonders what the hell she has done. He calls Denise to ask her to find Abby.

At the ranch, Victor gets off a call from his PI. He asks him to find Abby. Billy drops by. Victor was expecting him. Billy wants him to convince Ashland to stop the lawsuit and he’ll step down from ChanceComm. “I’m down on the ground and you’re rubbing my face in the dirt.” Victor says, “I’ll be damned.”

Lily goes to Society to find Billy. Ashland stops her and she lashes out at him for what he’s doing. She asks why he’s doing this.