Home » Young and Restless » Y&R Recaps » Abby Drops Dominic Off at Devon’s to Leave Genoa City, While Gaines Reveals a Bombshell — He Lied About the Forgery Story

Abby Drops Dominic Off at Devon’s to Leave Genoa City, While Gaines Reveals a Bombshell — He Lied About the Forgery Story 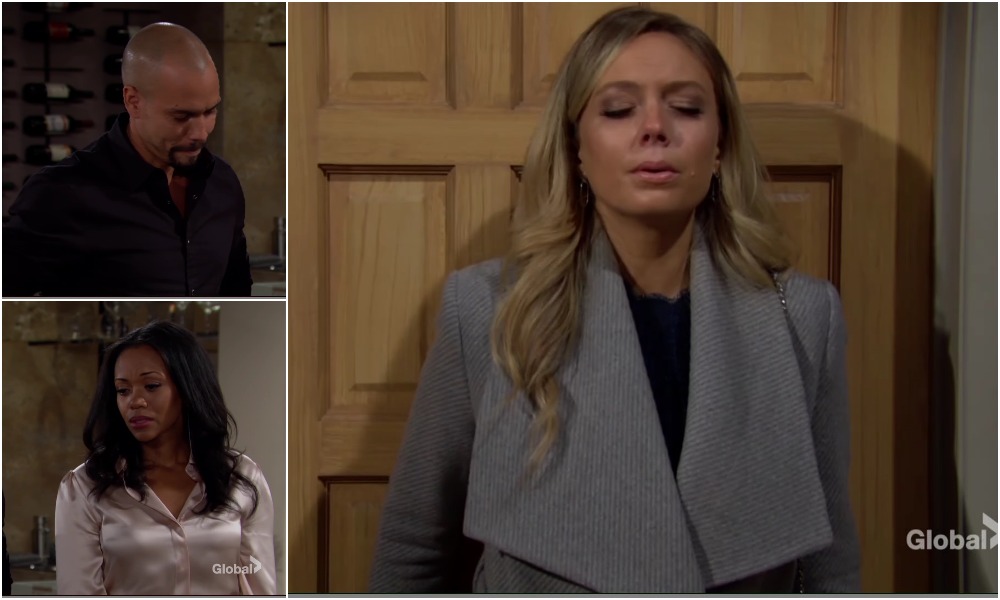 Soaps Spoilers has the Canadian Y&R day ahead recap for Friday, November 12, 2021 episode, which airs in the USA Monday, November 15. (Recaps live by 5:45 PM EST daily.) In the previous episode, Abby dropped Dominic off at Devon’s to care for. In this episode of CBS’ The Young and the Restless, Gaines makes a big reveal, Sally and Adam get closer, and Abby reveals she left her kid with Devon to her mother and father.

At Chance Comm, Lily and Billy ponder who could have gotten into their system ad published that article. They talk to Marty who says she got an email from Billy, signing off on it. Billy never sent it. It seemed urgent and so she did what she was told. Lily asks her to forward the email.

Sally visits Adam in his office. She shows him the published forgery article about Ashland Locke but he says he already read it. “And?” She asks. He tells her not to work too late and takes off. She sighs in frustration.

At the ranch, Victor looks at the forgery article about Locke. Adam appears and tells Victor that everything went off without a hitch. “And you,” he says to Gaines. “You played your role perfectly. Gaines says he didn’t have much of a choice. Victor leaves and Gaines admits he didn’t want things to come out like this. “You saved your own skin. There’s no shame in that. Now get over it because we’re not finished yet.”

Ashley calls and leaves a message for Abby at the Chancellor estate, surprised she’s not home. She’ll wait for her.

At the penthouse, Abby apologizes to Devon and Amanda but he told her to reach out if she needs help. She does. “Here I am.” He’s glad she did. She cries that she can’t do this alone. She tries to fight the feeling but she’s a trainwreck over Chance and can’t focus on the baby the way she wants to. She tries because she loves him but she can’t give him the attention he needs. “It’s unfair.” She asks him to take the baby and care for him until she can get her head together. She calls herself a mess and he reminds her it’s nothing to be ashamed of. Is she sure she doesn’t want to leave the baby with someone in the family?

Abby says he’s been a part of the journey since day one and he’s at ease with him. Devon thinks she deserves time to herself. She needs time away from Genoa City so she can return and be the best mom. “Hang on a second. You’re thinking of leaving town?” He asks if she’s going to Spain. She isn’t. She may stay here. LEaving town could give her peace of mind. She apologizes to Amanda and realizes she’s not thinking of her or Moses. Amanda wants the baby there if that’s what she needs. Devon assures her Moses will feel the same. Abby’s grateful. She’ll send the nanny to help and can get the doorman to get the supplies from her car. Abby tells her son that Devon will dote on him and she’ll think of him daily and will come back to him soon. She loves him more than anything. She thanks them for being best friends. There are hugs all around and Abby goes. Devon thinks about Neil telling him about business versus family, how hard it is raising kids and the love that goes along with it. He had told him he didn’t have it all taken care of with some contract. What if the baby really needs him? He talked about priorities. Amanda finds him and thinks he’s a natural. He asks if she’s okay with this. She is. Later, Devon gives the boy a bottle and sings to him while Amanda watches, smiling.

Rey finds Sharon at work. They kiss each other’s cheek and she talks to him about the Locke article. They were hoping they’d find a way to keep the peace. Rey explains his meeting with Billy, and how he’s surprised it went live because Billy didn’t seem to want that to happen when they met. They discuss the article itself and the impact it’ll have on Locke. Sharon wonders if Victoria knew about his past. Rey hopes they can protect the kids as it’ll get ugly. Sharon imagines the Newmans are circling the wagons planning retaliation as they speak. They keep up talk about that until Rey tells his wife to put it out of her mind. “Good idea,” she says, finally. He asks her on a dinner date.

Lily and Billy wander into Gaines’ hotel room. He’s gone. Lily knew he’d go rogue. He has no allegiance to Billy. Billy calls him self-centered but he’s no fool. If he goes public, Ashland and Victor will go after him. He’s running scared. “Because he’s in over his head,” Lily says. They wonder if it wasn’t him but Adam and Victor.

Adam finds Sally at Society. “We really have to stop meeting like this,” he jokes. She’s surprised he’s having a good evening since he was trying to avoid talking about that article, earlier. He wasn’t trying to get out of talking about it. He had someplace to be. Sally doesn’t think Ashland could be too happy about it. He based his entire empire on illegal activity. “Sometimes things aren’t always as they appear,” Adam says with a wink. Sally wants to talk about what will happen to Newman Media now. He thought there was a certain trust between them. She likes to back it up with security. He shows his confidence. It delays her fears but not her curiosity. She’ll keep it to herself since he’s not going to talk. “Oh!” He says, “Thank God. Thank God!” He laughs. They agree to have a drink, instead. They toast to the things he hasn’t told her and to Newman Media. She’s glad they can hang out as co-workers. She thought the gossip site that implied they were an item had him running scared. He doesn’t let gossip run his life. She asks how Chelsea took it. He didn’t talk to her at first and then cleared it up later. Sally’s relieved. Adam wants to keep the peace because of Connor and because he hopes she’ll be working for the fashion platform. He thinks it’s best to keep things clean and above board. He doesn’t want to give her ideas that anything is happening. Sally couldn’t agree more. They discuss him growing up on a farm and special skills as they drink. He can drive a tractor and milk cows, he says. Adam is blown away that Sally says she can guess his weight, walk a tight rope, and juggle knives. “What?” Her parents were carnies, she reveals. He tells her she gets more interesting by the minute. He asks what’s in the funnel cakes. She can’t picture him eating deep-fried sugar. He tells her in farm country, county fairs were the height of excitement for kids. He asks if her parents’ carnival went through Kansas. She can’t recall. He needs to know. He talks about winning a stuffed animal but only getting a small stuffed animal. He deserved the large one and needs to know if her family wasn’t involved. She jokes that it sounds like them but there’s no proof. Sharon and Rey walk in and Rey asks if Sharon wants to go somewhere else. “No, of course not. Why would I?” She asks.

Abby returns home to Ashley. She tells him the baby’s staying at Devon’s for the foreseeable future. Ash asks if it was Devon’s idea. Abby clarifies it’s her idea. She can’t take care of him and needs to get herself together. Ashley’s proud that she knows she needs help with him but calls it drastic. The family is there to help her. She appreciates it but Abby asks her to believe she made the right call. “Why do I have to sit here and defend my actions to you?” Victor learns what she did. He knows Devon will be a good father but he asks why she didn’t come to them. She says if it wasn’t for Mariah and Devon, the baby wouldn’t be here. Devon was one of the first to hold the baby and has been a constant presence in his life. She thinks the baby feels comforted by Devon. She won’t change her mind. She goes upstairs and Victor and Ashley continue to talk about it. If they need to they can take the baby home, if this doesn’t work out. They hug. Later, when it’s dark, Abby has a bag in her hand and she leaves the house.

Back at ChanceComm, Billy gets texts from Victoria and Ashland, asking why he went live with the article. Victoria threatened that he’d better line up his team of lawyers. Lily looks aghast. She wants to print a retraction but he thinks it’s too late. He won’t even talk to Victoria to let her know that he had nothing to do with this. Lily wants to tell people they were hacked. He thinks they’ll look like amateurs, not in control. Lily says they weren’t. Billy talks about the story being true but Gaines walks in and tells them the story is not true. “I made the whole thing up in order to hurt you.”

Brook Lynn’s Shocked at Who She Finds Creeping Around in Her House, While Dante Has Horrible News for Liz