Home » Young and Restless » Y&R Recaps » Y&R Day Ahead Recap – Abby’s Devastated Over New Evidence That Chance is Dead — Plus, Sharon Fights With Rey Over Adam

Y&R Day Ahead Recap – Abby’s Devastated Over New Evidence That Chance is Dead — Plus, Sharon Fights With Rey Over Adam 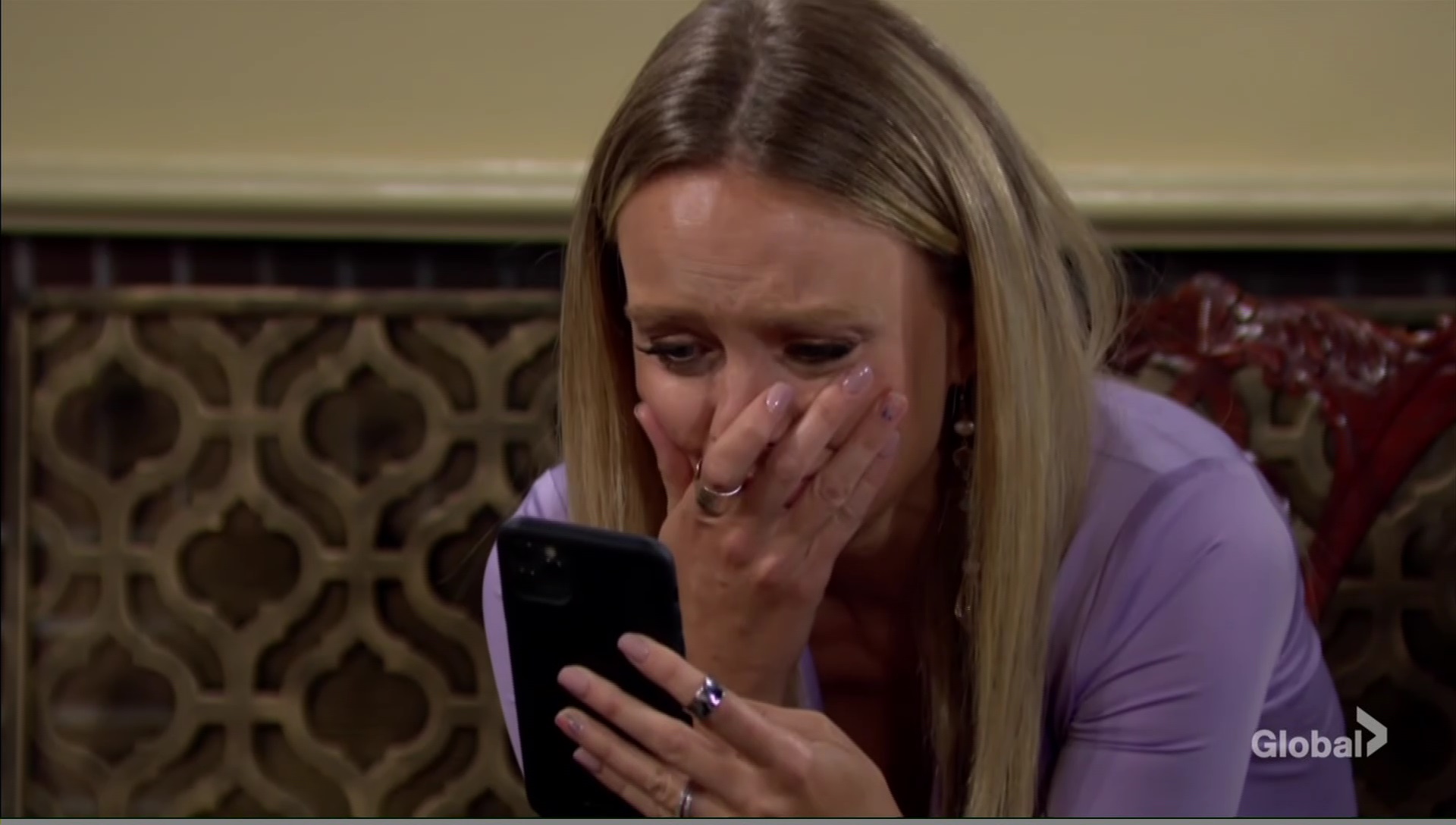 Soaps Spoilers has the Canadian Y&R day ahead recap for Tuesday, October 26, 2021 episode, which airs in the USA Wednesday, October 27. (Recaps live by 5:45 PM EST daily.) In the previous episode, Abby is in denial about Chance’s death. In this episode, Adam and Billy toy with each other, Rey demands answers from Sharon, and Abby refuses to believe that Chance is dead, though the evidence is building up.

At Abby’s, Tessa and Mariah try to comfort Abby about Chance being presumed dead. They don’t even know if Chance was really staying in that building, Abby says. Ashley and Devon push Abby to drink a shake to stay strong. Christine returns. Her contact sent her photos from the scene of the explosion. There is one that she needs Abby to take a look at to get a positive identification. Abby looks at Christine’s cell phone and breaks down. “Oh my God,” she says on repeat, clearly shocked by seeing the watch Nina bought him. She says it’s engraved with his name on it. He wouldn’t wear it when he was working undercover. The women agree, he may not have been there. Devon has no ideas to add and Christine says the building was leveled. That’s all they have to go on. They decide to keep praying. Abby thanks Christine for showing that photo and thinks Chance wasn’t in the building when the bomb went off. Maybe he’s hiding and can’t contact them because he doesn’t feel safe. Mariah says anything is possible. Abby asks Christine to keep calling her contacts. She goes off to do that and Mariah asks what they can do for her. Abby says not to give up on Chance. Tessa says they won’t. Abby says she never threw in the towel when Mariah was missing. They knew they’d see her again because she’s a survivor. Devon agrees. He goes to make a call and Ashley sends Tessa and Mariah into the kitchen to make some food. Devon returns and Abby gets upset and raises her voice. The towel baby cries and she holds him and tries to soothe him. It doesn’t work so Mariah pokes her head in and asks to help. Ash sends her off to heat up a bottle while Devon holds Dom. Abby is upset that she can’t help Chance or give her baby what he needs. She needs air and asks Ash to care for her baby while she goes for a walk. Ashley’s beside herself, wishing she could help her daughter. Mariah reappears and they worry and watch Devon feed the baby. Christine reappears and Devon asks if she thinks there’s any way that Chance made it. The explosion happened in the middle of the night. Chance could have been getting ready for bed but she didn’t want to say that in front of Abby. Ashley appreciates her candor. Christine wishes she had more. She’s devastated for Abby. Ashley’s grateful she came in-person to tell them.

Chloe and Kevin watch Esther at the park with the kids. Chloe tells Kevin she’s upset that Lauren hasn’t reacted to all of her social media posts of the kids. They assume she’s still angry about Victoria using Sally’s dress. Kevin thinks she’s overreacting. Chloe agrees. She’ll go see her in person. Kevin thinks Lauren needs time and space. Chloe agrees to wait. He asks if Sally has any more tricks up her sleeve. Chloe has no idea. She talks about how she’s been warning Sally to stay away from Adam and she doesn’t listen.

At Crimson Lights, Billy prods Sally about dating Adam when she’s been warned off. She clarifies that she isn’t dating him. She likes and respects him but they went to Italy so she could get Victoria’s dress to her. After eavesdropping, Adam appears and asks if Billy’s interviewing Sally. Sally says he’s trying to dig up dirt on Adam. “That is one hundred percent correct,” Billy says. Adam sniffs the air. “What is that smell? It’s the sad stench of desperation.” Billy just wants Sally to know what to expect working with Adam. “Lies, manipulation, deception, treachery. Did I miss anything?” Adam thinks he’s hit all the bullet points since he rolls it out every chance he gets. Billy shrugs and then talks about his job being following him around to get information. Sally says they’ll get used to seeing him slink around behind potted plants. Billy and Adam agree on one thing. The CEO of a company’s job is to decimate the competition. Adam agrees. Inside, Lily goes to Sharon for coffee. They talk about the beautiful wedding in Tuscany and look over and see Billy, Sally and Adam. Sharon asks her to reign Billy in so he’ll leave Adam alone once and for all, just as Rey wanders in. Sharon sees Rey and asks how long he’s been there. Meanwhile, Billy finds Lily and orders coffee to go, while Lily questions Billy about what happened with Adam. “Nothing worth repeating,” Billy states. He goes and Adam thanks Sally for defending him. Sally was treating him the way she wants to be treated. Adam tells her that Billy’s no threat to Newman but Sally thinks he’s concerned more than he appears. She asks if she should worry that Newman Fashion will get caught in the crossfire of their fight. He tells her not to. In the other room, Rey questions Sharon about her talk with Lily. Sharon calls Billy exasperating. Rey thinks the talk had more to do with her feelings for Adam. Sharon checks to ensure that Adam and Sally are gone and then tells Rey that Billy’s accusations are out in left field about Adam this time. Rey is surprised she went to Billy, even though he told her not to get involved. Sharon says, “Actually, yes!” Sharon thinks Billy was manipulating Rey. Rey says it didn’t happen that way. Sharon says Billy’s spreading ugly rumors and he doesn’t even know if a crime has been committed and he’s got Adam for murder. Rey reminds her that he’s only looking into this. Sharon says Billy sees Adam as a monster. Rey asks what she sees when she sees Adam. “A victim?” She says no and realizes it wasn’t her place to tell Lily to rein Billy in. Rey laughs. It’s always her impulse to protect Adam. “I think we both need some air,” Rey tells her. He goes and she looks glum and says, “Okay… I love you too.”

At Chance Comm, Billy tells Lily that there is “No activity on Gaines’ passport.” Lily suggests he used a pseudonym or rented a car. Maybe he is still in Tuscany. “Or maybe he’s six feet under,” Billy suggests. They need to find the man no matter what. Then they can prove Adam is responsible. Lily thinks Gaines might have gotten a bigger payoff and even if they do find him, he may not want to talk to them. They still need more to fend off Newman Media. She has an idea. They need an ally, someone who has influence over Victor and Ashland. It has to be Victoria. Billy says she’s furious with him to bring Gaines to Italy. Lily reminds him he deleted Gaines’ video and is in her good graces again. Billy thinks she’s overly optimistic. If Victoria can convince Victor to stand down, they can avoid a battle. He texts Victoria to talk.

Sally finds Kevin and Chloe with the baby. Kevin goes to work and Chloe asks how Sally feels. She says it’s been a dream. She’s getting calls from everyone about her designs. She asks how things stand between her and Lauren. Chloe admits they haven’t made up but it’ll happen. Sally’s glad. They may have another issue on their hands. Sally tells her about Adam and Billy’s argument. Sally admits she thinks they’re getting ready to go to war and is concerned that they won’t be the fallout from the feud. They leave and Abby appears and talks to Chance, at the spot he proposed to her at. She talks about how they made plans for their future and doesn’t care what anyone says. She won’t give up on him. She can’t. She sobs and then calls her dad to ask for their help.

Kevin and Rey meet at Crimson Lights and commiserate over their annoyance with Adam. Kevin feels like Chloe’s playing with fire working for him while Rey doesn’t like how Sharon defends him. Kevin thinks Adam will land himself in prison at some point.

Adam meets with some private investigator. He tells the man that only he and Victor can know about this.