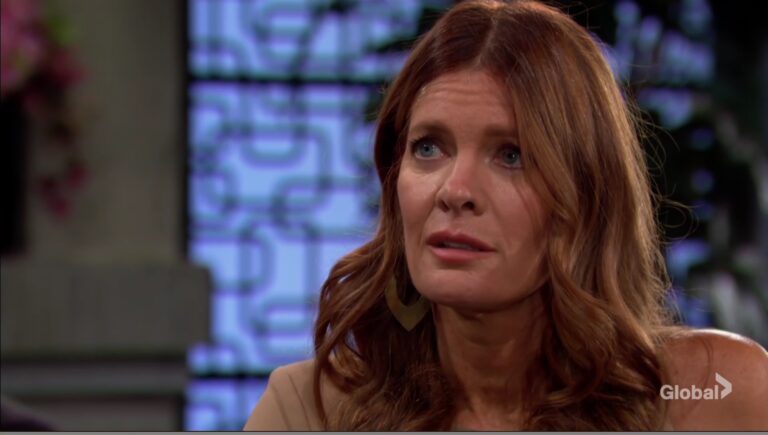 Soaps Spoilers has the Canadian Y&R day ahead recap for Friday, October 29, 2021 episode, which airs in the USA Monday, November 1. (Recaps live by 5:45 PM EST daily.) In the previous episode, Abby left her baby behind as she ran away, after hearing more bad news about Chance. In this episode, Phyllis and Nick try not to fight but they can’t seem to stop, while Adam and Sally banter and Abby is in shock over losing Chance.

At Crimson Lights, Nikki and Jack talk about Victoria and Ashland’s relationship. She’s not sure her daughter has had a second to realize what could happen. Nikki’s dreading when that happens. They talk about having lunch together, but Nikki thinks her inbox is far too busy for that.

He holds her and tells her, “Sweetheart, it’s okay.” Victor lets Ashley in. He tells her about the wedding band recovered. “Oh God no,” she says. “He could have taken it off,” she says. Christine says he never took it off. It was part of his backstory. Rifling through the building for remains will take time, she says. They head inside and Abby cuddles Dom when he cries, sobbing that it’ll be okay. Ashley asks if Devon can take the baby for a walk. Mariah agrees to go with him. “Do you need an extra blanket,” Abby asks? Mariah grabs one and they take off while Victor asks Christine to stick around. He has questions, but she has no answers. It could take days for them to find out more information. He asks if she’ll tell Nina. She fights tears, knowing it’ll be hard. She goes. Sharon arrives. She heard that Chance may have been killed. She came to offer comfort. Ashley appears and says Abby’s in shock. She’s not sure anything is registering. They’re happy to have her help. She goes in to see Abby. Abby doesn’t want to talk so Sharon offers to sit. Abby worried if she opens the door, she may start screaming and never stop. Sharon thinks that’s a normal fear. Abby can’t fall apart. Sharon doesn’t see that happening. Abby remembers Chance saying they’d have a long and happy life together. “Why is this happening?” Abby can’t stop thinking about how Chance must have felt during the explosion.

Adam strolls into Society and sees Sally texting. “Hi there,” he says. Sally scrunched up her face, trying to figure out which of his personalities he is today. He’s either business CEO Adam with no time to waste on a lowly peon like her or fun Adam. He apologizes about the last time when he was short with her and she realizes this is a new personality. It’s “Mea culpa Adam.” He asks how many personalities there are. “It’s an ever-changing landscape,” she says with a grin.

She knows how to figure out which he is today by inviting him to join her for lunch. Adam’s booked. He’s there for a meeting.  Sally knew it. “Now I owe myself twenty bucks!” She cracks jokes that this is her third rejection. They banter and joke about how they agreed not to go there. He wishes his schedule was cleared because she’d be a more entertaining lunch. She tries to guess who his meeting is with but he won’t say. “Is he bigger than a bread box?” She brings up Gaines and his smile falters. She zips it, realizing she’s not supposed to bring him up. He sits and she tells him she’s still getting inquiries about Victoria’s wedding gown and some are clamoring for a copy of it for their own weddings. His PI arrives and Sally looks curious but takes off.

At their hotel suite, Phyllis tells Nick that she’s into making this work. She needs to table it though because she’s still hungover. He has no problem with that. He offers to take her to lunch, eliciting a smile from Red. She goes to the bathroom and stares at herself for long minutes.

Phyllis and Nick turn up at Society. Nick sees Adam with his father’s PI. He thinks they’re clearly scheming. “Mm-hmm,” Phyllis says. He asks what that’s about. She doesn’t want to get into that but he wants her opinion. She asks him to let it go and put his attention on them. He looks at Adam and the PI as she says, “Can you do that?” He reminds her of how she protected Summer. She asks what he’s protecting. He has no answer. She asks him to protect himself. “Who cares about your dad and Adam? Let them deal with consequences of their own actions.”

He tries but gets sucked in, trying to protect. He thinks it’s better if he tries to stop things. She thinks if he obsessed a little less it’d be better for their relationship. He agrees to have lunch elsewhere. She’s shocked and grins as they get up. Nikki and Jack stroll in and ask them to join them. Phyllis asks if she wants her to join them too. Nikki says yes. They got along well in Italy and she’s hoping to convince her son to settle his differences with Victoria. She thinks Phyllis could be helpful. Phyllis admits she’d love it if he made peace with his sister. They get a table and talk about Gaines. Nick tells them all that Billy brought Gaines to Italy and he locked him in a closet during the wedding. Nobody has seen the man in days. “Dad had Adam take care of him.” Jack wonders what that means. Nikki says it’s nothing drastic. Victor found some compromising information about him. Phyllis and jack mock that they’d expect nothing less of Victor. “Trust me, trust me, you’re better off, ” Phyllis tells Jack. Nick gets angry — she made her point. “Knock it off.” Jack talks about playing a game with Harrison online and asks if Phyllis or Nick have other suggestions for them. Phyllis will find something online. She sees a message and tells everyone her assistant manager has an emergency. Nick asks if he can get her meal boxed up. “I’ll put that in your capable hands,” she says, almost sarcastically. Nikki asks if everything is okay. Jack goes to make a call to postpone a meeting and Nikki worries about him and Phylis. “Let’s get back to Jesse Gaines,” he says. Nikki sniffs. It’s behind them. She wants to stay out of this. He doesn’t like it, given Adam’s history. Jack worries about Nick since he’s not getting along with anyone right now. Nikki asks what Jack knows about the tension between Phyllis and Nick. “They hit a bump in the road. They’ll figure it out,” he says.

At Crimson Lights, Mariah, Tessa, and Devon sit around and mope. They can’t imagine what it’s like to have her whole world coming down around her. She realizes what she said and apologizes to Devon. He says not to feel bad. He does know what it’s like. He talks about family helping him get on track. Tessa’s grateful and now he’s happy again. Tessa thinks they need to keep the faith. Mariah worries about Dominic, too. Abby’s emotions affect him, too. She worries about the stress on the baby. The nanny and Ashley will be a comfort, Devon says. Tessa is glad Sharon’s there right now. She’ll et them know if there’s cause for concern.

Sally goes to Adam at Newman Media and he tells her his meeting was tedious. She wants to give him a heads up. The National Inquisitor got photos of them in Tuscany and are insinuating that they’re an item. Adam’s surprised it took them so long to get around to it. He shrugs it off and then gets a call from Chelsea. “That was fast,” he says. Sally wishes him good luck but he declines the call.

At the Grand Phenix, Nick finds Phyllis. He wished she hadn’t left. He owes her lunch. “You don’t owe me anything. It’s fine. I knew what I signed up for. I knew your family history It didn’t matter to me because I love you. The whole thing is worth it. It was worth it,” she says. Nick tells her, “You’re right it was.” Phyllis asks, “Who are we kidding? This isn’t going to work?”