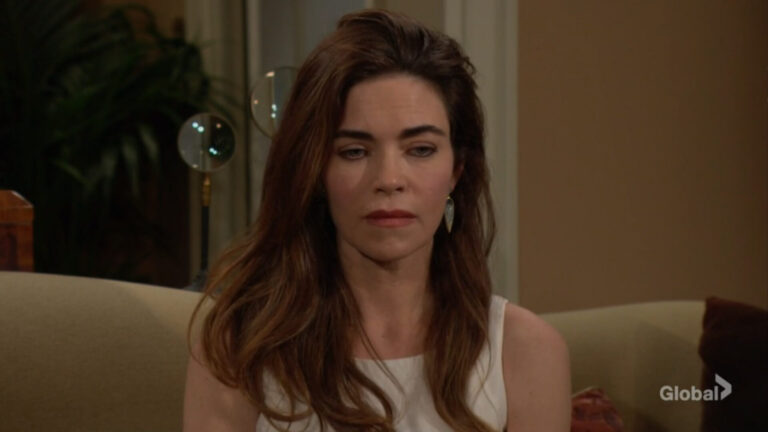 In this episode of CBS’ The Young and the Restless, Michael and Nick have information for Victor, Kyle asks Summer for a favor, and Adam and Sally celebrate their success. In the previous episode, Michael caught Phyllis stalking Diane, Summer ordered her mom to make peace and Amanda was devastated. 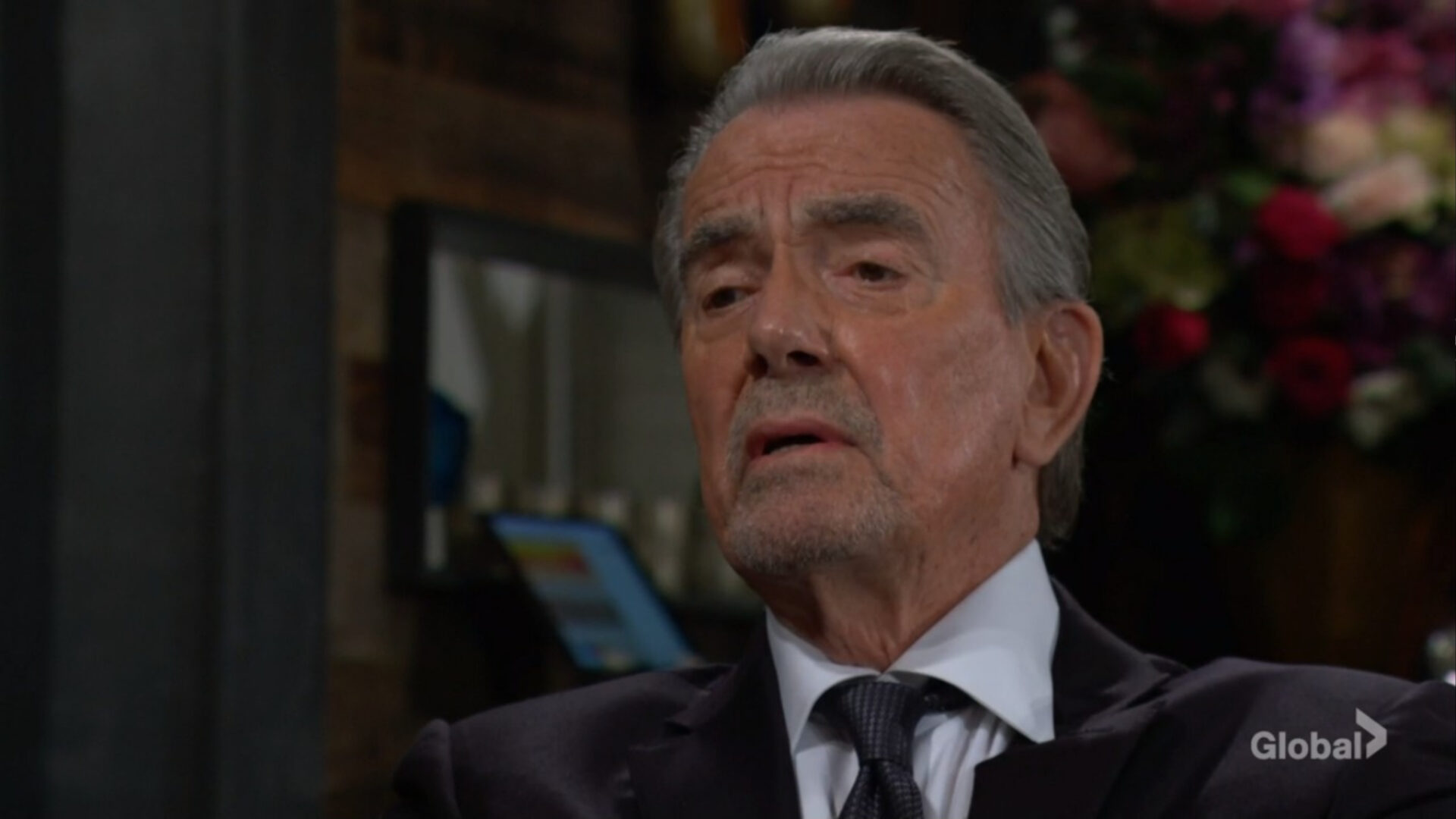 Michael chases Victor down in Society since he’s not been answering his phone. The lawyer tells him he’s found Ashland and Victoria.

They are living at a hotel in New York and Locke has been meeting with a high end real estate broker. Victor guesses they are planning to launch a new company. 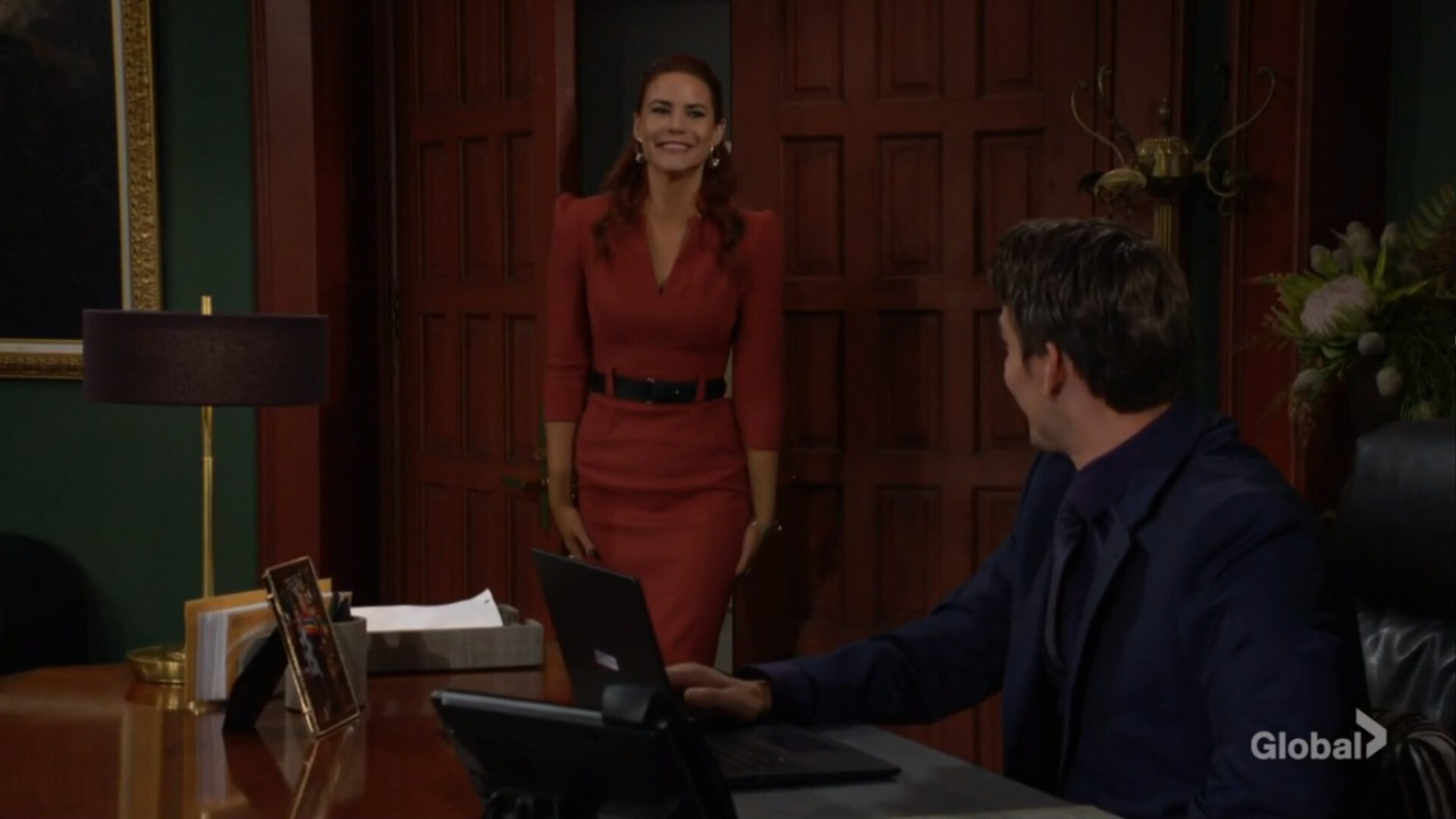 Sally and Adam are in his office going over a press statement. He stops to admire her new outfit as understated yet powerful. For him, giving a major press conference may be normal, she points out, but this is new for her.

He agrees, but it’s different now. He has her. She says today will be a turning point for both of them. They kiss. As she drinks some water, they go over the speech again. 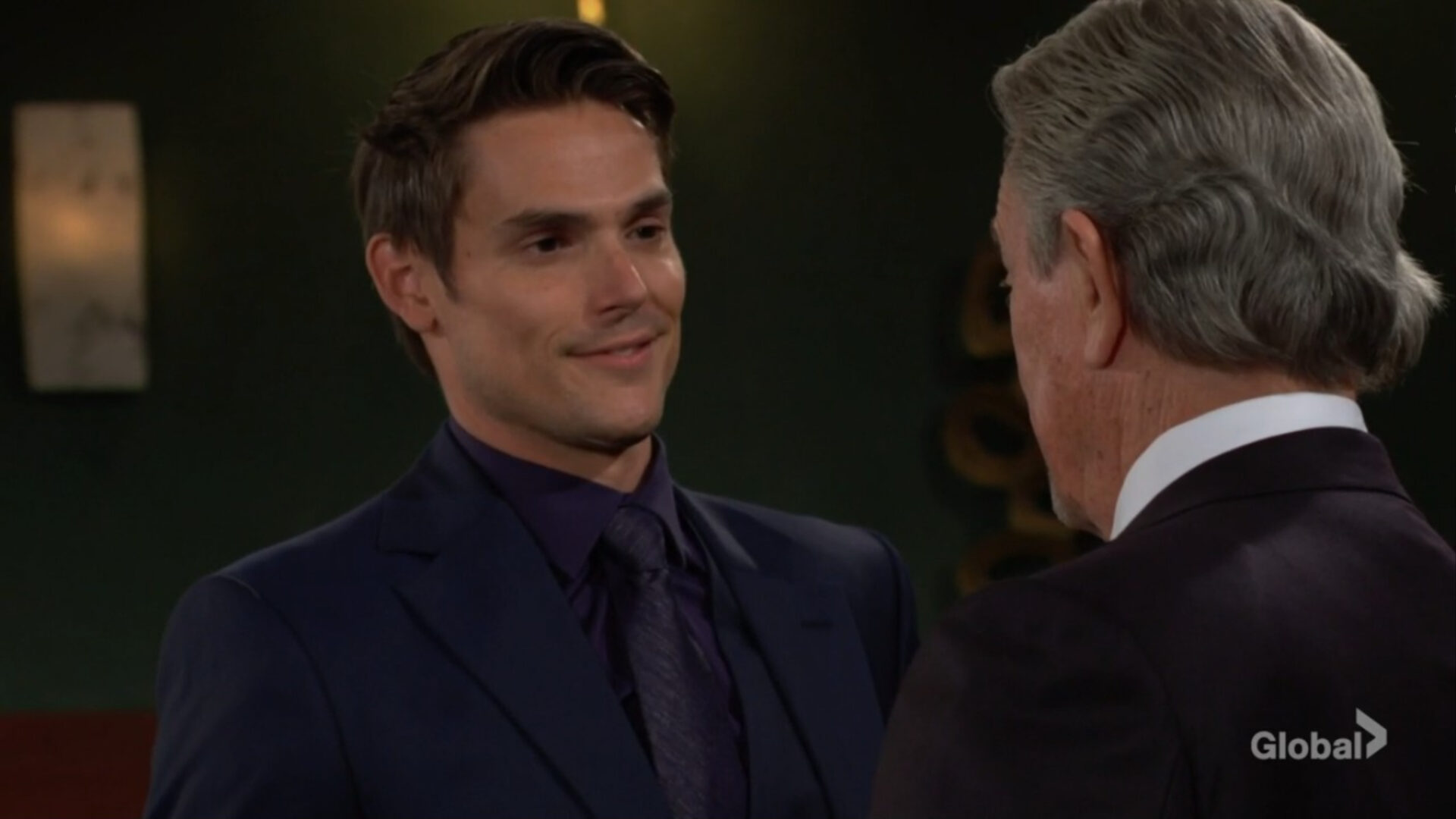 Victor meanders in and Adam asks for a moment alone with him. Adam repeats that he plans to prove what he can do. Victor growls. He’s banking on him to pull this off. 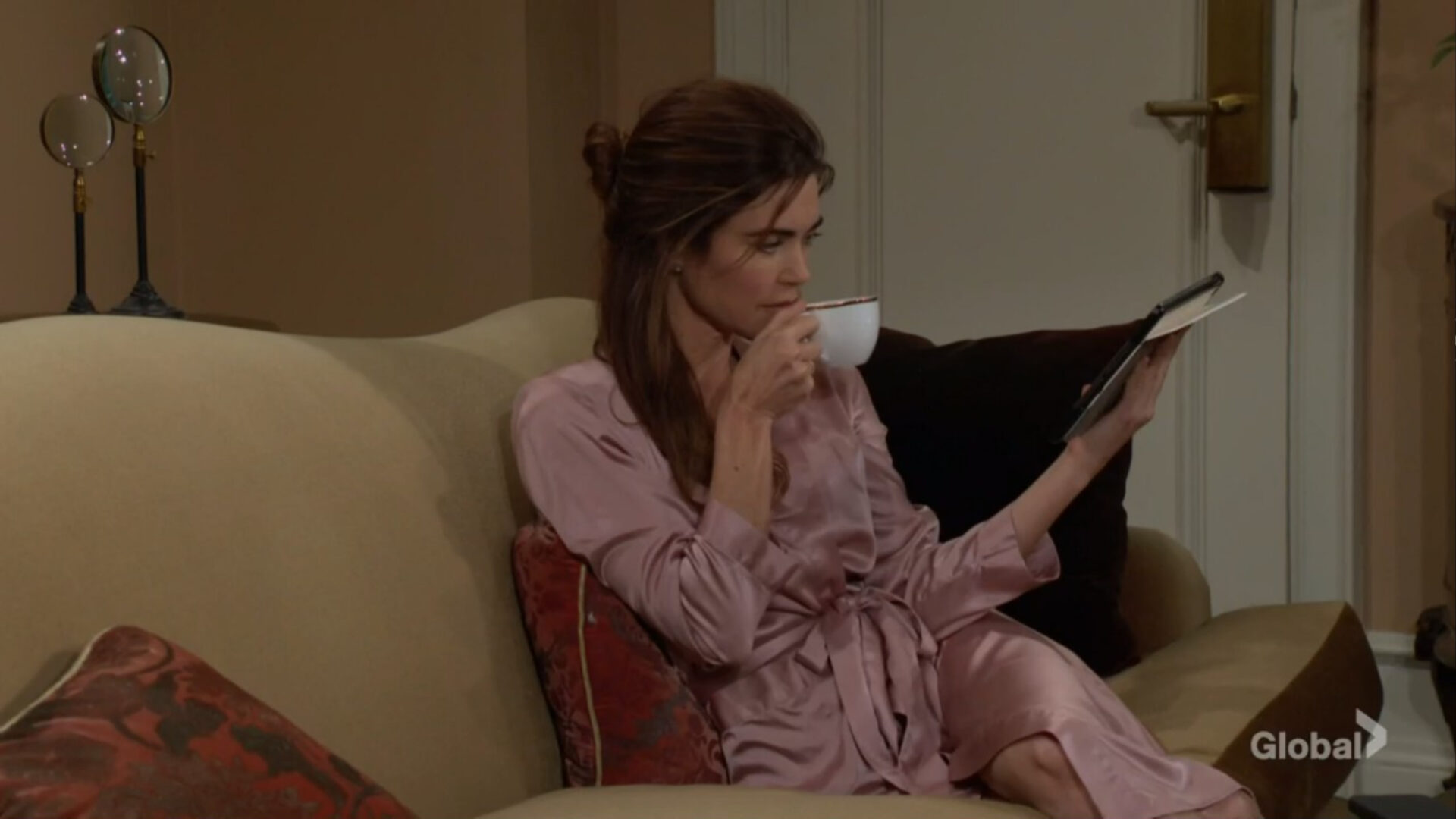 At their hotel in New York, Victoria is enjoying a leisurely morning and suggests Ashland order breakfast. He invites her to brunch. She tells him the press have been covering their every move and doesn’t want to miss one minute of it.

The big Newman press conference will be happening soon. She’s sure that her father will put Adam in her old job. It’s tiresome and predictable and she’s not falling for it.

Locke says there’s a satisfaction in being able to predict a rival’s move. She says that no one gets her like he does. Ashland suggests she order room service while he prepares for their meeting.

When he heads into the shower, she calls Nick. He’s thrilled she’s called. She informs him that all is going well and they are in New York. She’s sure Adam’s is thrilled all his dreams are coming true.

He urges her to call their mom. She will when the time is right. Today she needs to meet some investors to bankroll a new venture. Her brother wonders if they will be competing against Newman. She’s not explaining. 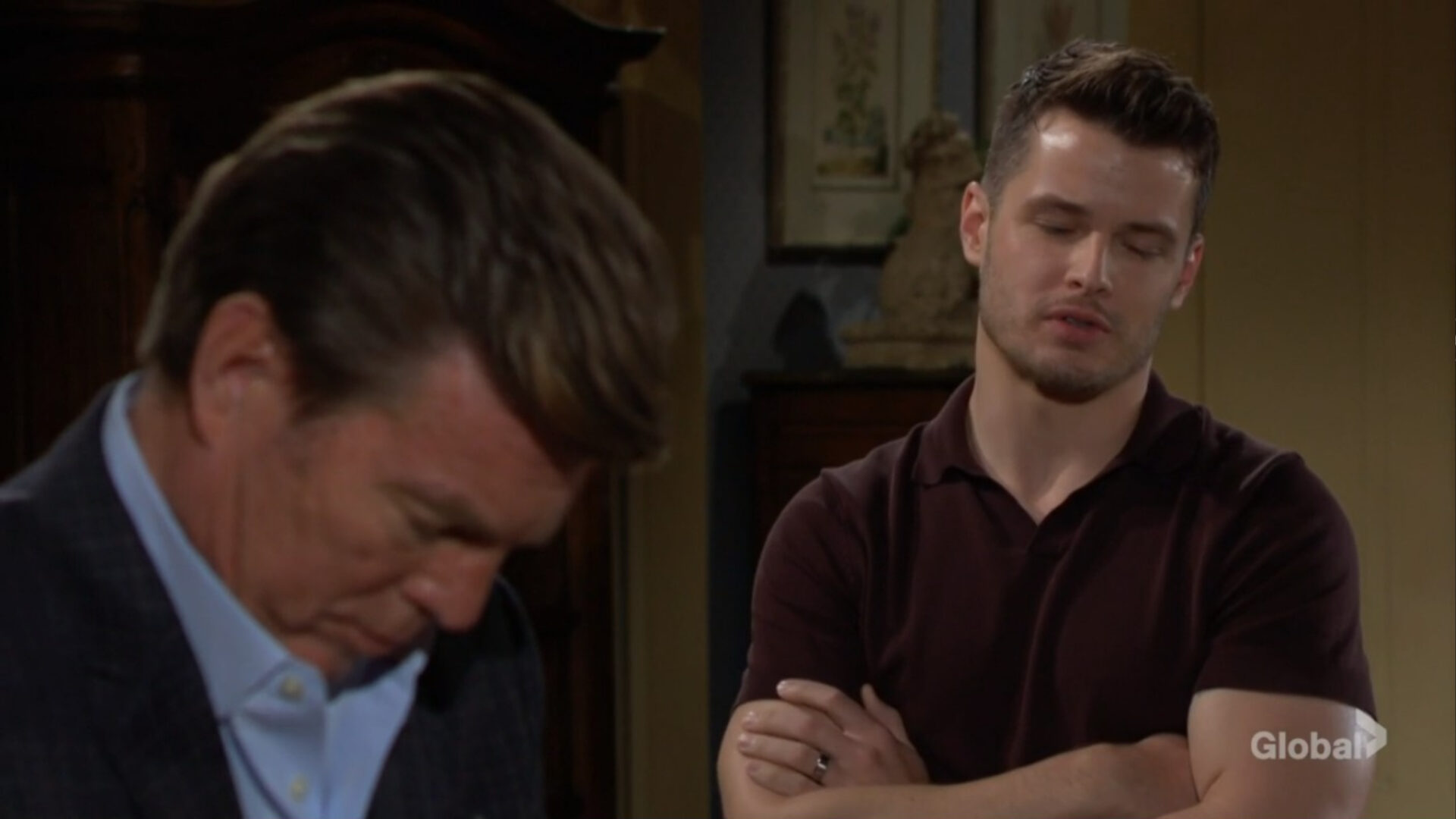 At the Abbott estate, Jack tells Kyle that he wants things to run smoothly as he takes over Marchetti. The sooner he’s in the CEO seat, the better for everyone. He gets a text that the Newman press conference will go live in an hour.

Kyle ribs him about Adam taking over while he’s leaving. He reminds him he will be working for a subsidiary. When he says everything is coming together, Jack wonders if that includes Diane.

Kyle says she hasn’t done anything wrong yet but he’s not ready to wipe the slate clean. They are taking things slowly. Jack thinks that’s wise.

There’s a part of Kyle that wants to open his arms and let her back in but then he remembers what it was like grieving for her murder. That was exhausting and traumatic.

To learn it was all a lie is not the kind of thing you get past overnight. She seems to say all the right things but he’s wary. His father assures him that if Diane is reverting to her old tricks, he will let him know. 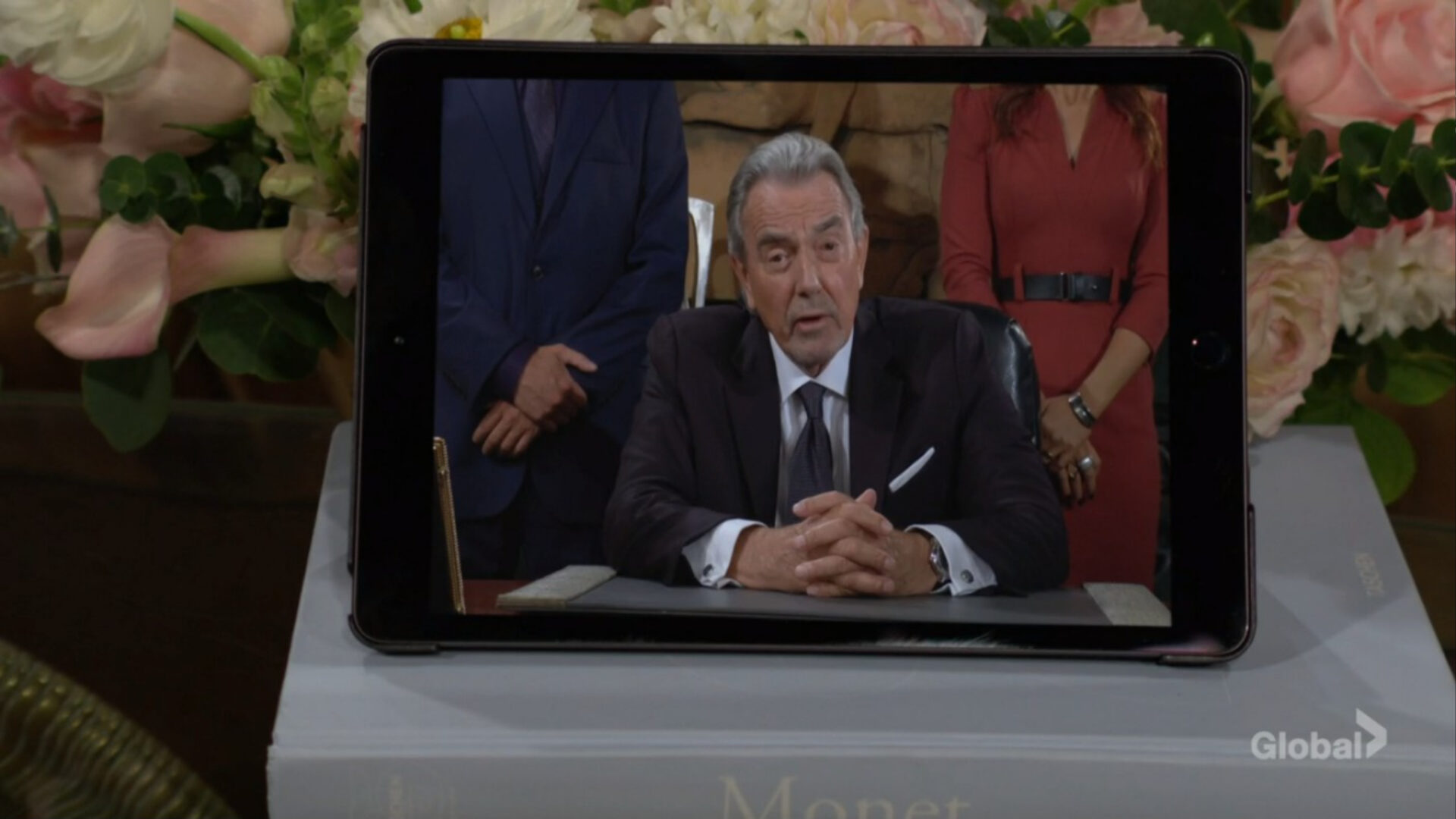 In the CEO office at Newman, Victor kicks off the press conference. He notes the things his daughter did and explains Adam is being named CEO immediately. The mustache lists his son’s skills and qualifications before introducing him.

Adam reads his statement, and introduces Sally in her new position. Nick pulls his father out of the room as the Q&A starts. Nick tells his father everything Victoria said to him.

Victor is surprised he’s telling him all this. Neither of them want her enmeshed more with Locke.

Watching the press conference, Victoria and Ashland note that Victor hasn’t mentioned him. It’s like he doesn’t exist. Locke thinks Adam is sucking up to his father.

Once she hears about Sally’s new position, Victoria has had enough and declares her father deserves what he’s got coming to him.

Back at the office, Adam and Sally look at how people on the internet reacted to their press conference. He pulls out a present to commemorate this special occasion. Before she can open it, she pulls out a gift for him.

It’s his favorite scotch. They recall when he introduced her to it. She says no one would have guesses they’d be on top of the world like this. They close the door and have sex.

Summer finds her mother clinging to the furniture at the Grand Phoenix. Phyllis complains about all the work she has to do.

Her daughter reminds her she agree to go to this meeting with Diane. They are meeting on neutral ground. Summer drags her out.

Phyllis and Summer arrive in Chancellor Park where Diane has been waiting for them. Summer explains her mom has been thinking. Phyllis claims she has gained perspective.

Diane is amazed she managed to do that so fast, given how many issues she has.

“I don’t want anger and resentment to fester and rot away inside me as it’s done to you,” Phyllis declares, saying she wants to put the past behind them. She will never forget the things she’s done, but she won’t dwell on them.

This is a pact of non-aggression, a truce. “You just made my day,” Diane says with a smile. She’s sure this isn’t easy for her. It must be so easy for her make peace with her, so freeing. This means a great deal to her and is best for everyone.

Phyllis reminds her no one has any reason to give her a second chance, but she will. She won’t make her daughter uncomfortable and won’t make her choose sides.

Diane appreciates the effort and is happy she’s reached such a surprising level of serenity and maturity. “Let’s go,” Phyllis decides, jumping up. Summer leads her away. Diane smiles to herself.

At the Abbot estate, Kyle and Jack have watched the press conference and are surprised by Sally’s new job. Jack wishes her all the best. Diane shows up to announced she met with Phyllis.

Kyle can’t take credit for that. Diane fills them in on the truce and she owes Summer some thanks. He gets a text from his wife and takes off. Jack congratulates Diane on winning someone else over. She’s not convinced this truce will hold.

Jack doesn’t want to talk about that. She suggests that Phyllis is trying to use her to make amends with him. Diane assures him she will not be kicking the hornet’s nest.

Phyllis sends him a text, asking to meet and talk.

At the Grand Phoenix, Summer tries to tempt her mom to lunch. Phyllis has a drink. Her daughter tells her how proud she is of her. They talk about how unnecessary negativity is, especially now that Summer has so much on her plate.

Phyllis gives her word that she will keep the peace with “that heifer.” When they hug, Phyllis looks miserable.

When Kyle arrives, he finds his wife alone and tells her what a great diplomat she is. They start talking about his mom’s request for help finding a job. He wonders how she would feel about him hiring her.

She worries about how ready he is to let his mother build a life this close to him. He’s not sure the scars will ever heal, but there’s no way of knowing without trying. She says they can do their best and see what happens. They hug.

Back in New York, Victoria and Locke congratulate themselves on how well their meetings went. She says they don’t need to take on any investors. They have enough money to do it all on their own. There’s something very appealing about that.

At Newman, Michael meets with Victor. He’s learned Locke and Victoria are planning to launch a new company. Victor orders him to approach whoever they have been meeting with and convince them not to invest a dime into their venture.