Viewers Asking, Is Y&R Afraid to Write Drama, Then Boom, Victor Gives Us What We’ve Wanted 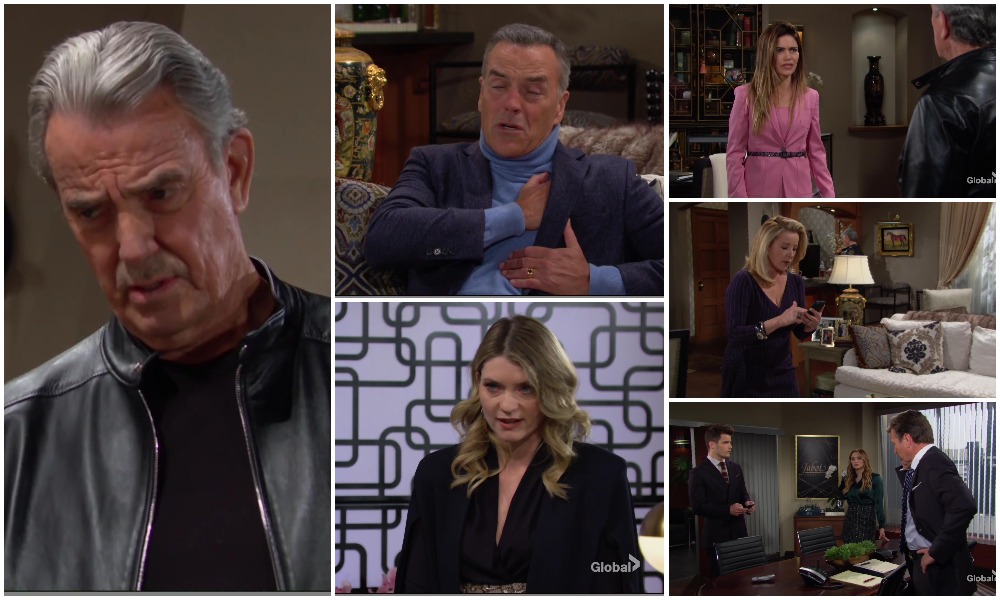 Young & Restless Opinion: Is Y&R afraid to write drama? When I wrote the headline I was really saying that I think the show is almost afraid to write drama. I know I’m not alone in this and I’m not being facetious. We’ve been waiting for some real drama, not boring business deals or forced plot developments, soapy drama. Thankfully at the end of this week, they gave us what we wanted, but it was basically a rewrite of the time Jack stepped over Victor when he had a heart attack. Oh well. I was in the moment.

Kyle thinks that Harrison’s his kid yet he’s never even had a paternity test done. We’ll try to forget about how stupid that is. At least he found some cajones and almost confronted Ashland. While I respect it, I’m grateful it didn’t happen, because I’m with Jack. Ashland doesn’t even have confirmation that Tara did Kyle and he’s already ruined his business. The minute Kyle confesses, Ashland will probably ruin him personally. Even from his hospital bed. What I don’t get is how Jack hasn’t at the very least suspended Kyle over this fiasco? As for Ashland, maybe if Ashland treated his wife better? I know, we barely know anything about this couple but it seems to me from what little Tara has said, she’s under Ashland’s thumb.

She’s not a good fit

Stiff Tara isn’t a good fit for the role and the writing isn’t doing her justice. I can’t see Kyle and her together in any sexy scenario. Perhaps if she was trashed on Vicodin and alcohol she might let her hair down. Even my mum’s society friends aren’t as stiff as her. Perhaps the more money you make the stuffier you become in her world. If we saw flashbacks to the scenes of these two flirting and having sex, I might buy into the story more. Maybe if she acted more alluring and couldn’t hide an attraction to him, this would work better. It’d also cause drama for Kyle and Summer. Give us a reason to care whether or not she is in Genoa City. There’s zero drama here. The music tells another story, which is hilarious but Summer literally has no reason whatsoever to be jealous. And before those of you who don’t get it ask why I want her to be jealous, I don’t. I just want drama! There will be no love triangle, so where is this going? Will Ashland die of the heart attack and Tara what…move to Genoa City with Harrison? I doubt it!

I can’t tell if it’s the casting or the writing. Tara needs more of an edge. We need to see her less afraid (bland) and more (dangerously) conflicted by her attraction to Kyle.

Lauren was harsh in her advice to Sally to let Jack go, but was she right? Sally said she was in love. I know, I know, Sally falls hard and fast but some people do. I thought my Lauren’s advice was bitchy AF. I don’t think Sally and Jack are finished and there’s a part of me that’s curious to see what happens between them next. I only hope that Sally doesn’t go all Sheila on him. I’m not into the obsessive love from the 80s and you know how Y&R likes to stick to what they know.

Rey’s been hanging on by a thread for weeks with Sharon. The two had one therapy session and strangely haven’t had one since. They should be having them twice a week at this point. Finally, Sharon opened up to him to tell him how she saw their future which consisted of them being intimate with one another, buying property together and making love. It was good stuff. He was eating out of the palm of her hand and then that call came in. It was surprising to me that he’d urge her to take the call during such an intimate moment and even more surprising that she’d agree to it. It’s not what I’d have recommended. Of course, it was Adam. The timing was way too perfect. Lazy and rushed, but I guess there had to be some straw that broke the camel’s back.  That was it and Rey was finished with Sharon. Now he’ll go live above her coffee shop in order to “get away from her.” Try not to laugh too much over that.

Question of the week: Is anyone else surprised that Adam didn’t have Sharon plant a camera to catch Chelsea in the act of moving and speaking? I guess the show thinks that’s too easy.

About that call, my friend Jennifer says it all below…

Why didn’t we see or hear Adam? Why on earth is he suddenly calling after proclaiming it’s time to move on like 2 days ago? Why does Sharon answer random number? So contrived to the point of foolishness! They are missing all the beats that could be played here.

Ashland had a heart attack this week in front of Victor, during their business meeting. It was just bad luck for Locke and good luck for Victor. And shocking soapy goodness. Victor’s ruthless and Y&R hasn’t forgotten it, thankfully. It was horrible. Absolutely horrid but I don’t give a crap about Locke one iota, so I didn’t care that Victor did this to him. Yep. But other viewers, some who have watched soaps for years but haven’t seen anything so horrible were trashing him all over social media. That’s fine — everyone’s opinions count, not just mine.

Nobody can out Victor Victor, even Jack couldn’t do it. Ashland has now learned. But what does this mean for Mumbles? Surely he knows that Ashland signing over his company to him under duress makes the contract null and void? But we all know Nikki will keep his secret and it’s Ashland’s word over The Black Knight’s. I’m curious as to where this is going to go. What I’m not curious about is Victoria’s boring vendetta against her father. Can we stop this for good, please? I doubt I’m alone in saying…who…cares. Give Victoria something to do that doesn’t involve that idiot Billy Boy or her father.

He’s brutal. Isn’t that why we love @EBraeden?!

It is such a true Victor move. Got to love the man and his tenacity. Lol.

Ashton… sorry Ashland sure likes his turtle necks. In April.

Mariah and Lola acting like Lindsay Lohan from The Parent Trap, trying to think of a way to get Rey and Sharon to stay together is a bad idea. Don’t mess with people’s marriages.