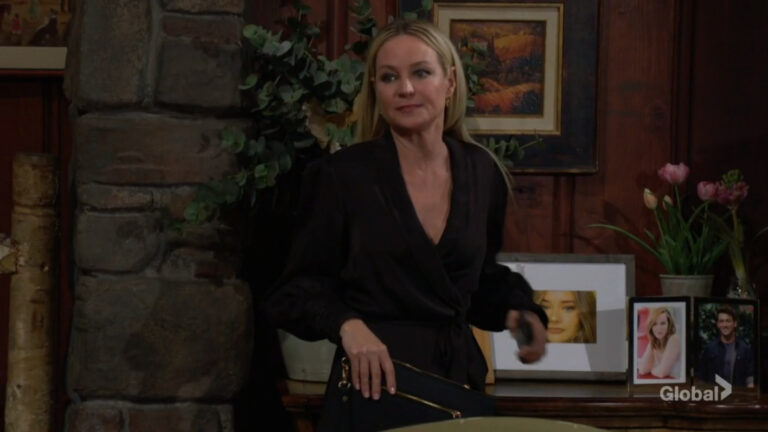 Rey Rosales died in an accident on April 19th, off screen, of course. Viewers are still wracking their brains to make sense of why the show killed Rey off, instead of just writing something exciting for him.

He was a well-liked character, but Young and the Restless is drama deprived, so we didn’t get that and we surely didn’t get to see a goodbye scene between Rey and Sharon at the scene of the accident or at the hospital.

Viewers love to theorize, myself included. Most of the rumors that come out are fan speculation, not factual. I find myself doing less and less of that for Y&R, knowing that most of what airs on screen is going to be anticlimactic.

Some thought Sally was involved in Rey’s death, that she ran Rey off the road while jogging in the fog. Some accused Ashland of murdering Rey. None of that happened. That isn’t how this show is written anymore.

Rey had a heart attack and his car swerved and caused the accident. There is no hidden storyline on the way. There was no drama that came from this death and there won’t be, as interesting as it would be.

Rey didn’t even get a memorial. I understand that it’s expensive to build new sets and then take them down. The show is obviously on a budget, so it makes sense that we didn’t get a church set, but they built up this memorial for a few days.

I felt like a clown, believing that we’d actually get to see something more than a few of them sitting around Sharon’s house, telling the audience that what we all missed out on at the memorial that never happened. Things we wanted to see such as Chance’s reading, Noah putting together a lovely montage, and Tessa singing.

Telling us what we missed out on only causes annoyance. Making Rey’s death all about Ashland and Victoria and then Chelsea, angered most viewers.

Chelsea dropped by Sharon’s place the day of the memorial. The last time these two were in a scene together, Sharon was reading Chelsea for filth, basically telling her that if Rey hadn’t driven back to the house to get the hockey tickets, he’d still be alive.

Sure, she was grieving and didn’t mean it, yet Chelsea still showed up at her house, in a gutsy move. Sharon explained that Rey’s death wasn’t her fault.

She was invited to the memorial and back to the house afterwards, while Abby, Chance and the others skipped it because they all had better things to do than be with family after Rey died. This was so far out of character for all involved.

Chelsea was so verklempt that she could barely string two words together at the house and then she went home and sobbed over him. I get it to some extent. He was a good man who forgave her for almost killing him. But to say that they shared a bond was a stretch.

We saw them have a few friendly scenes, then not be shown together for weeks on end. Then she wanted Adam when she returned. So where did this great love develop?

Chelsea said their bond was stronger than friendship. Here’s the thing. If it didn’t happen on the show, then most likely it did not happen.

That’s the whole point of showing versus telling. I won’t deny that I would have loved something messy to have happened and come out after his death.

Maybe a pregnancy and flashbacks to Rey living this double life. This is, after all, supposed to be a soap opera. But instead, it was all in her head. She wondered if their bond would have developed into something more, like “a potential future with a man I could have loved.”

Um. What? A future with a happily married man? She was barking up the wrong tree. And she wonders when it’ll be her turn for happiness.

They spent a lot of time on a story that never happened when they should focus on the grieving widow. Why not bring Celeste or Mia back for a few scenes?

They could have argued about whether Rey’s body should have gone to Miami, which would have had viewers angrily siding with Sharon, clamouring to watch those episodes.

Instead, we got Sharon being understanding and kind. Sure, that’s her nature, but this is a bloody soap opera. Not a Hallmark Original. We want messy.

We didn’t see one bit on Chey on screen, but JG is acting like they were having a steamy affair 😂

What could have worked for fans

What could have worked was to have Sharon at the scene, sobbing over poor Rey’s lifeless body, asking why this happened. There wouldn’t have been a dry eye watching.

Having everyone gather at Sharon’s place and actually show the montage of photos of Rey’s life, have Tessa singing…really, just giving the audience what was supposed to have happened behind the scenes.