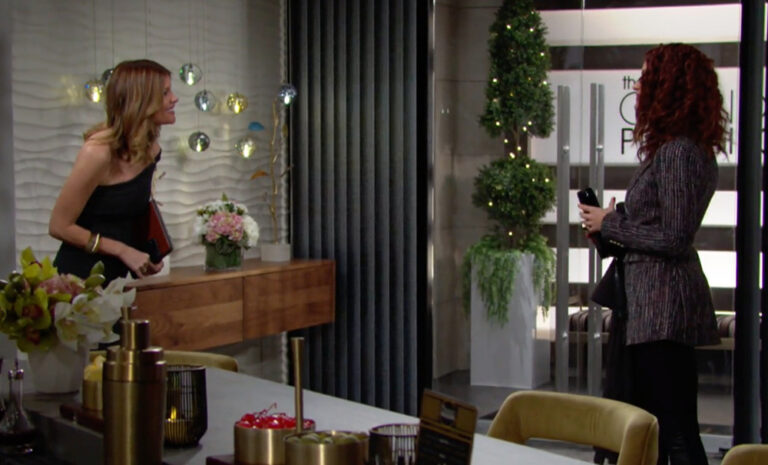 Welcome back to my Young and the Restless opinion column where I deconstruct Y&R, including characters, writing choices, sets, clothing, and anything that tickles my fancy.

Though I’ve only seen these two in less than a handful of scenes now that I’m back watching (since my six-month hiatus), I’m really into Phyllis and Sally’s scenes. Phyllis has always been the bad girl, annoying to some, beloved by others. I’m in the beloved camp.

I like a bad girl. I can’t help it. I’m drawn to them, though I recognize and have no problem calling them out when they take things too far. No matter how much I enjoy a character, they’re not safe from mocking. Bad girls are entertaining and move the storylines along.

Is it possible that Phyllis judges Sally because they’re so similar?

Bad girls up to no good

I was shocked when Phyllis refused to help Summer crack Kyle’s phone recently. We know Phyllis hasn’t renounced her badass bad girl nature, so I was left thinking she didn’t want Summer to follow in her footsteps. Unless I’m wrong. After all, I’ve missed a lot of the story! But later, Phyllis broke into Sally’s room, stole her laptop, and then searched her browser history. Horrifying. In real life, I’d want her punished, but this isn’t real life so I found it shocking and entertaining AF. Yep.

Without these bad girls, everyone in soaps would be kind and considerate. That’s maybe what some want to see in their soaps but that’s not what I’m looking for. Give me messy! Give me a reason to feel one way or another about a character. Who doesn’t love to hate certain characters from time to time?

There are those in the camp that loathe Phyllis. They find her immature and want her to grow up, especially since she committed several crimes. Understandable. I can respect that. But that’s not me! Of course, how protective she feels of Jack and Summer being at odds with Sally has meant Phyllis’ mama bear instincts kicked in and her bad girl ways are front and center. If they weren’t, and she minded her own business we’d be wondering what was up with her.

Sally’s another bad girl, from a different generation, with different crimes under her belt. The big question we all have about Sally — is she after Jack for a relationship or does she want his money and company? Is she climbing the corporate ladder by using her sexuality or does she genuinely like Jack? Since I’ve been away six months, I can’t tell yet but I’m looking forward to finding out!

Character consistency is important to me and Young and the Restless does really well at keeping our characters from straying too far from who they are unless they’ve good reason to. I believe that’s part of their success.

Putting each other on notice

Today’s scene between Phyllis and Sally was ridiculous and fun. They have chemistry and both actresses did a wonderful job of bouncing off each other. Phyllis was so obvious, trying to get Sally away from Jack by setting her up with Troy.

Sally, “Wow, you must really hate that Jack and I are becoming friends.”
Phyllis, “No, I actually have no problem with that, Sally. No problem with a friendship. If it were to go further, well then…”
Sally, “Yeah, you don’t have to play these games. I get the message.”
Phyllis, “What is the message?”
Sally, “That you believe that your ex is too good for me.”
Phyllis, “Uh, I thought that went without saying.”
Sally, “Yeah. I don’t wanna hurt your feelings, but I don’t need your approval. In fact, honesty I could [couldn’t] care less about your opinion.”
Phyllis, “Oh, well, you don’t hurt my feelings, and just to make this clear you know, I’m not the only one in town who feels this way. It’s like everyone in town knows that Jack Abbott is out of your league.”
Sally, “Well I am familiar with Jack’s romantic history and I would certainly be an upgrade over some of his exes.”
Phyllis, “Well, that’s obviously a hit on me. got it.”
Sally, “I didn’t mention your name but I mean if that’s what you heard, I’m not going to argue the point.”

They were smug, strong, confident, calculating, and clever. I didn’t side with one over the other but I know many will have sided with either woman. I’d love to know whose side you’re on in this argument! I’m in the Team Drama camp! Vote in Soaps Spoilers’ poll!