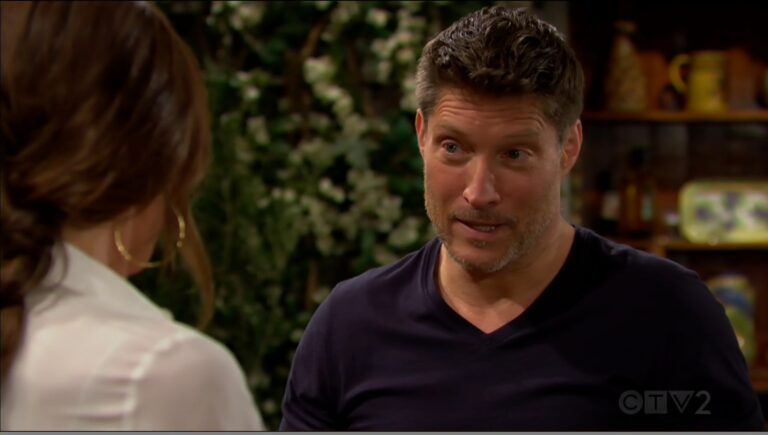 In the Wednesday, July 13, 2022, full episode recap of CBS’ Bold and the Beautiful, Sheila calls Mike for help, Ridge calls Baker for an update, and Taylor assures Deacon they aren’t losers.

We also have Monday’s B&B recap where Deacon and Taylor bonded over their exes reuniting while Finn struggled to escape. *B&B did not air on Tuesday.*

At the hideaway, Finn struggles to get up from his bed. He barely sits up before Sheila returns and demands to know what he’s doing. Finn says he was testing how much he can move.

She puts down some ground rules. When he’s alone, he can’t move. It’s not safe. They need him to heal so he can be whole again. She failed to get his medicine. It was too risky for her out there so she called a friend to get them.

Mike arrives and guesses he’s going to be sorry he has. He urges her to make more friends. She asks him for medicine. Mike says he’s done enough for her. She reminds him of the last time he tried to cross her and she sicced a dog on him.

Finn listens as they continue to bicker. Sheila orders Mike to get the medicine.

Brooke and Ridge kiss at their place. She could really get used to kissing him again. It’s good to have him home. He’s eager to take care of her. He adds that he has to make sure Taylor is protected too. That’s why she adores him so much. He cares.

Ridge will be worried as long as Sheila is out there. He thinks she thought of herself as part of Taylor’s family. The doctor was too trusting and that concerns him.

She’s sure the doctor has learned there is nothing redeemable about Sheila. Pacing, he complains about Sheila escaping. Needing an update, he calls Baker.

The cop shows up moments later. Ridge apologizes for berating him and Baker assures him they are doing all they can. Finding Sheila has been his number one priority.

That sets Ridge off. He wails about how his whole family is surrounded by security. Baker explains they think it was an inside job. Brooke pricks her ears up when she hears the guard’s name was Guthrie.

Ridge paces and rants about how slowly everything is going. Brooke asks about the guard’s name. It sounds familiar.

At Il Giardino, Deacon and Taylor discuss Brooke and Ridge’s “Destiny.” She explains that their destiny is just to break up and get back together over and over. Deacon thinks it’s a hamster wheel. She wonders how he actually feels about this.

Deacon is surprised she cares and appreciates it. She knows he wanted a future with Brooke and that night they had wasn’t just because she was drunk. He knows it sucks that Brooke and Ridge are reuniting but it is what it is.

He has it’s nice talking to her. They’ve never run in the same social circles and he guesses she’s not a fan. His daughter is probably the only one. They joke around and she says he’s fun, but dangerous.

Sharpe thanks her for listening. She asks how he feels about the reunion. He feels like a loser and assumes she does too. Leaping up, she insists they are not losers and makes him say it.

He tells her that being a loser has it’s advantages. Setting the bar low means people don’t expect much. Taylor doesn’t want him to put himself down, even if it is charming.

“Brooke and Ridge are together. Big whoop!” she says. “Big whoop?” he asks. She tells him they still have their lives to live. He admires her and says she makes it seem like anything is possible.

Taylor isn’t taking anything for granted. After losing Finn, she realized life is short. He admits that he was naive about Sheila too. He never thought she’d be able to shoot her son. The doctor says she pulled the wool over her eyes too.

They were both wrong. It’s something else they have in common. He admits that he tends to fall on the negative side of things and could sue some positivity to balance it out. She has to go.

He assures her he will call the cops if Sheila gets in touch. They need to get her back behind bars.