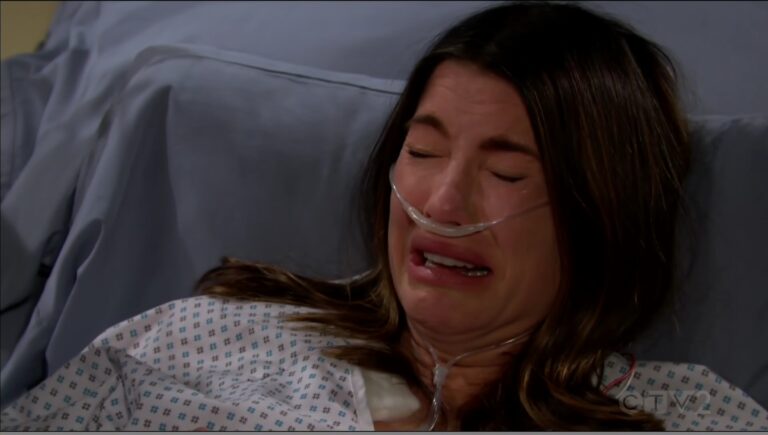 In the Tuesday, April 26, 2022, full episode recap of CBS’ Bold and the Beautiful, Brooke and Taylor continue to argue about telling Steffy what happened, Eric worries about how his granddaughter will recover, and Baker questions Sheila.

We also have Monday’s B&B recap where Sheila went into Steffy’s room with the intention of taking her out.

In the hospital, Brooke and Hope are concerned with Steffy not remembering Hayes. He’s concerned too. Hope says it could take her days or years to regain her memory.

Liam should be the one to tell her the truth as gently and sensitively as possible. Liam reminds them of what Taylor just said. Still, Hope thinks this will delay the inevitable. She thinks it’ll help her remember the shooting.

When Bridget appears, they ask for her thoughts. She says that Steffy’s stable and looks good. She thinks she can handle the truth.

Hope almost jumps for joy. Ridge appears with Thomas and they tell him what Bridget said. Thomas reminds Bridget that his mother is a doctor too. He and Ridge don’t want to rush into anything.

Liam says nobody wants to put her recovery in jeopardy. Thomas isn’t convinced and Ridge too is concerned. He’d like to be the one to tell her.

Inside Steffy’s room, Sheila thinks to herself that she never meant for this to happen. The son she loved is dead and now, Steffy’s given her no other choice. She toys with the machine until Taylor pokes her head in. “Sheila.”

She knows why the other woman is there.

She’s trying to make sense of Finn’s death. She reminds her she has her grandson and soon, Steffy will remember who did this to her and Finn. Sheila looks ill. Steffy stirs in her sleep and Taylor asks how she feels.

She opens her eyes and Liam, Thomas, Ridge, Liam and Bridget wander in. Steffy feels much better. She’s glad they’re all there but when she sees Sheila, she says she doesn’t get why she’s there.

Liam tells Steffy that Sheila’s here because they’ve all suffered a loss. Taylor stops him but Bridget thinks it’s time. Taylor calls her fragile and Steffy asks what’s going on.

Liam says it’s time to know what she’s been through. They’ll help her fill in the blanks.

B&B spoilers up to May 6

Bridget leaves the room and goes to Brooke, who asks how Taylor handled it when she told her it was time to let Steffy in on the truth. Bridget relays that she was concerned. Still, nobody can protect her from what she’s about to hear.

Back in Steffy’s room, the men try to give Steffy comfort and Liam admits there’s more to know  about the night she was shot. Ridge says they’ll find out who did this to both of them. Steffy’s confused.

Liam tells her there was someone with her. She’s more confused. He tells her she was with Finn. “Dr. Johnathan Finnegan.” She gawps. He asks if he sounds familiar.

Taylor tells her daughter that he came into her life when she needed him most.

Ridge tells her he saved her life. Steffy has a flash of Finn and Ridge pulls up a wedding photo on his phone. She looks and flashes to marrying Finn. Liam says he’ll always love her but Steffy has another child. Hayes. Steffy’s baffled.

She starts to remember as Liam leads her and then remembers everything. “Finn! Finn. I remember. Finn. Hayes. I want to see them.” Sheila blubbers at that and Taylor struggles with her tears.

They tell her that Hayes is fine and with Amelia. She asks if Finn’s at work. Ridge lets her know she was with Finn in the alley when she was shot. He was brave and protected her. They tell her how devoted he was until the end and Steffy tears up. Taylor’s sorry but Finn is gone. Steffy cries. “Gone?”