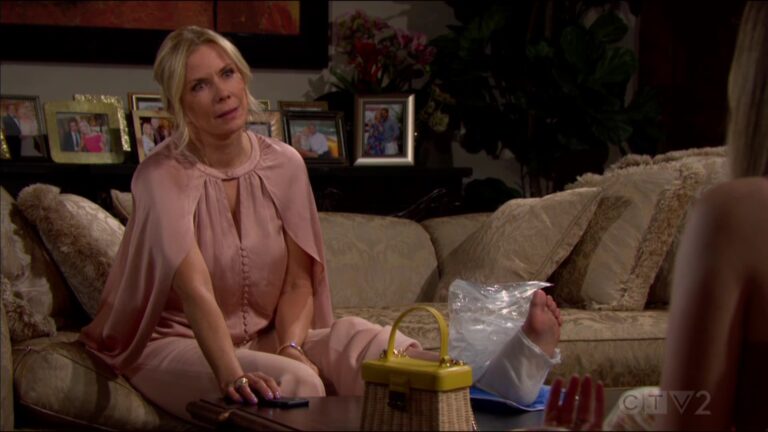 In the Thursday, August 4, 2022, full episode recap of CBS’ Bold and the Beautiful, Brooke worries about Ridge losing faith, Finn promises to explain things eventually, and Steffy thanks Li for saving her husband.

We also have Wednesday’s B&B recap where Ridge kissed Taylor after seeing a photo of Deacon and Brooke, and Steffy slipped Finn’s ring back on.

In Monaco, Steffy and Finn tell each other they will love each other forever and kiss.

They go back to their room and she still doesn’t understand what’s going on. It’s a long story and he’s still piecing it together. He just wants to hold her.

They sit down and she repeats this doesn’t feel real. “This is real,” he confirms.

She has a lot of questions. He’ll answer them eventually.

Finn tells her how romantic it is that death couldn’t keep him from her.

They kiss and violins play until his mom calls.

Li has been weeping since she saw the picture of him reunited with his family. She hoped beyond everything that this day would come.

Finn says it’s all because of her. His wife thanks her for never giving up on him and bringing him back.

Steffy sends Hayes off with the nanny and Kelly hangs out with her parents. After they discuss ice cream, she wants to go home.

Finn says thinking of walking through their front door kept him going. They cuddle.

After they send Kelly off, Finn realizes he won’t be able to explain things to the kids for another fifteen years. As soon as he came to, he was screaming inside for her and the children.

Sobbing, Steffy reminds him that he saved her life. “Of course I did,” he says.

Part of her died in that alley and she tried to stay strong for the kids but could barely hold on. It was torture to be at their house without him.

He reminds her that’s all over and they can make new memories. Their story has not ended and they have the rest of their lives together.

They kiss and decide to go home.

Overlooking the beach, Ridge and Taylor kiss. “Wow! That was unexpected,” he says.
“Was it?” she asks.

They go back to their room. She does her dance again and says that love conquers all. “You’re right I guess,” he concludes.

She says that Sheila will never break their family. He likes her mama bear thing.

This was one of the most amazing days of his life. They’ve witnessed a miracle.

They decide to give the reunited family more time alone. The doctor asks what he’s thinking and feeling.

“I am processing,” Ridge explains. It’s been a whirlwind. She says they got a little overwhelmed by the moment earlier. He stutters.

Stroking her arms, he says they’ve been through some difficult times so, “It just felt, y’know…”

At Brooke’s, she and Hope talk about what a great day it is. Hope is so happy. Brooke is happy for Ridge. Now he can feels some peace.

This reminds Hope of when she found out Beth was really alive. She hopes Steffy’s torment fades away just like hers did.

Brooke is sure that Taylor and Ridge are feeling euphoria right now. Hope is sure that Kelly must be thrilled. Now everything is as it should be.

Brooke checks her phone and is shocked when she sees that Hope posted the photo of her with Deacon. She panics that Ridge may have seen it and freaked out.

Hope doesn’t see the problem with posting a selfie with her parents in a public place. She understands there are concessions to be made for Ridge but she’d like to act normal.

Brooke worries that she and Ridge are still in a delicate place. Her daughter just wanted to capture a nice moment.

Her mom is sure that Ridge will be upset. She worries she’ll lose what little faith he has left in her.

Brooke says she just doesn’t want Ridge getting the wrong idea. Her daughter apologizes and doesn’t want to undermine her marriage.

Brooke asks her to take the post down and decides to call and check on her husband. When she calls, he doesn’t answer.

She assumes the worst. Hope tries to reassure her that no one will come between her and Ridge.