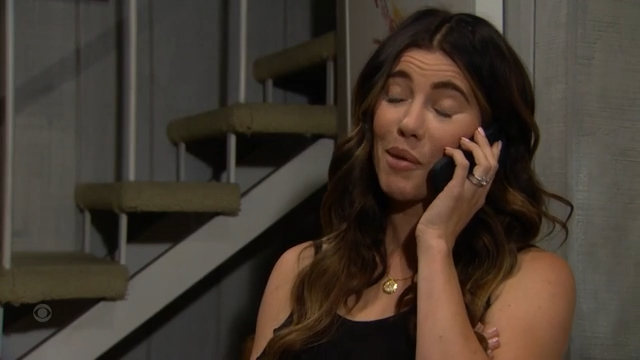 In the Tuesday, September 20, 2022, full episode recap of CBS’ Bold and the Beautiful, Hope learns that Ridge caught her mom with Bill, Deacon worries about what Sheila is planning, and Steffy decides Brooke has stood in her parents’ way for too long.

We also have Monday’s B&B recap where Brooke planned a special night with Ridge while Steffy pushed her parents to reunite immediately and lead the family.

At the cliff house, Steffy and Thomas continue pressuring their parents to re-commit to one another.

Taylor feels like they are watching an infomercial. Ridge says they should change the channel.

Steffy and Thomas don’t stop. Even Finn admits he can see the electricity between them.

Taylor knows Ridge loves her and everyone can see it. They also have an unspoken language and it’s beautiful to share that with someone.

Ridge agrees that Taylor makes him happy, but things are complicated.

The kids remind him of how his wife always lets him down. Taylor tells them to stop wishing for the end of his marriage.

They step into the kitchen and complain about how relentless their kids are.

Steffy and Thomas are disappointed Ridge hasn’t come around yet. She says Brooke has stood in their parents’ way long enough.

At Brooke’s, she’s eager to light the candles and dress up for her romantic evening with Ridge.

Liam arrives to collect his wife and she tells him about her mom’s plans.

He mentions that he was just speaking to Bill, who said Ridge caught him with Brooke.

Hope has some questions about this. Brooke reminds her of how Ridge feels about Bill. He was not very happy.

They talk about Bill’s boundary issues and Hope worries this is a problem.

Her mom admits Ridge made it clear how he feels about Deacon or Bill in the house.

Brooke thinks this is reasonable. Her daughter doesn’t and suggests her mom is worried there is a problem. Brooke insists it’s all no big deal. Ridge has been having a lot of family get-togethers since Finn got back and she gets it.

Tonight will just be about them reconnecting.

Once the kids leave, she changes and lights some candles.

Back at the cliff house, Steffy notices Brooke is calling Ridge’s phone.

He left it on the table so she grabs it and claims he can’t come to the phone.

“I’m his wife,” Brooke reminds her. “Not for long,” Steffy says, declaring he belongs there and hanging up.

Steffy tells her brother they need to keep pushing and get Brooke out of the way once and for all.

Sheila paces around Deacon’s little room and thinks about Hayes and how good it felt to hold him.

Deacon arrives, looking at the message he got from Nikki Newman on his phone.

He notices Sheila has a “look” on her face and doesn’t like it at all. She wonders why he always assumes the worst about her. “Have I been wrong?” he asks.

She says she’s only thinking of her grandson.

He reminds her she needs to stay away from him. It’s becoming a full-time job keeping her out of trouble.

Sheila is sure no one is looking for her anymore and accuses him of being a “grey cloud” before undoing his belt and suggesting she take away his doom and gloom.

Deacon wonders what she doesn’t want him to know.

He senses she still thinks she will be reunited with Finn and her grandson.

She doesn’t want another lecture. He suggests a spanking and she chuckles.

Deacon can understand she’s torn up about being excluded from her son’s life.

He’s willing to listen to her vent, but she can never have a relationship with her family again.

He’s only trying to help but she feels like he’s just telling her what not to do. He reminds her she needs to stay “dead” to keep out of prison.

Sheila claims she’s just stuck in limbo. Deacon says he needs to go out and she needs to stay there and not do anything crazy.

Hope and Liam go to the cabin. She kisses him and thanks him for being himself.

They discuss the Brooke and Bill situation. She feels like everything is trying to pull her mom and Ridge apart.