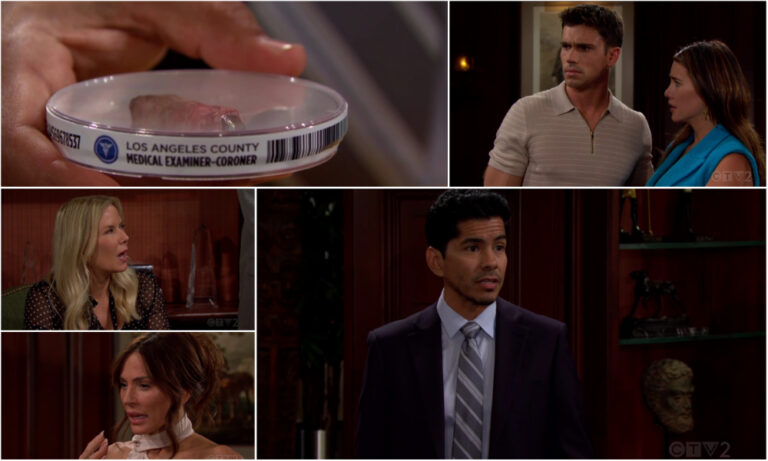 In the Thursday, August 11, 2022, full episode recap of CBS’ Bold and the Beautiful, Liam and Hope are feeling thankful, Taylor question Li about staying silent, and Thomas realizes he should spend more time with his son.

We also have Wednesday’s B&B recap where Finn and Steffy got passionate, Liam and Hope got romantic, and Ridge avoided confessing to the kiss.

At Forrester Creations, Brooke gets a call from Detective Sanchez. He’s been looking for Ridge. They have an update on Sheila. She agrees to gather the family to meet him.

At home, Steffy and Finn kiss and he tells her how incredible last night was. She thinks it was amazing to reconnect and wake up together.

She stared and him all night and kept touching him to make sure he was real. He assures her he will never leave her and the kids again.

“We are so lucky to be a family again,” Steffy says, kissing him.

Once they are dressed, Li shows up. Brooke calls to say that there is an update on Sheila and they need to meet in the office.

In the cabin, Hope and Liam kiss and then talk about how great everything is. Their family is thriving. She’s sure Steffy and Finn must have lots of joy too.

He reminds her that Sheila is still on the loose. As they fold laundry, she complains about him having his shirt on.

Thomas shows up and they chat about his sister. The topic turns to Sheila and Hope reminds them they need to be positive. Getting Finn back was a big win.

This has all taught Thomas that life is short. The kids come in from playing jump rope. Thomas rushes out to play catch with Douglas.

Liam tells Hope how well-adjusted Douglas is thanks to her. She says he means the world to her. Once they get Beth to watch a movie, they kiss more.

Douglas and Thomas return and the kid tells his father that he misses him a lot and wishes they were together more. Thomas tells him how much he misses and loves him.

He explains that he thinks about him all the time and he’s always there. Maybe that’s not enough? Thomas hugs him.

Douglas wants to play with his dad more but Hope sends him off to read. Thomas thanks Hope for creating such a wonderful home for his son.

It’s hard for him to hear how much his son misses him. He knows he has reasons to feel overlooked. He’s decided to move in with Eric and wants Douglas to move in too.

Hope insists that they need to table this discussion to a time when the kid can’t overhear.

Once Thomas exits, Hope is in shock. Douglas jogs out and wonders where his dad is.

Outside, Thomas says his son will never doubt how much his son loves him again.

At Forrester Creations, Taylor paces as Finn and Steffy arrive with Li. Taylor immediately asks Li why she kept Finn’s survival a secret.

Li claims she never meant to hurt or deceive anyone. Sanchez strolls in and Eric says Ridge is on his way.

The cop announces that they have located Sheila. She left LA and has been spotted at a convenience store. They also found an abandoned car with her fingerprints on it.

A park ranger later found evidence that someone was attacked by a bear. He hands around some grisly photos of what’s left of Sheila.

“It was a chilling scene,” he explains, showing them the evidence bag of her remains. The DNA evidence proves it was her.

Finn is in shock. He hates to think of his birth mom gone in such a vicious way but at least they don’t have to worry any more.

They decide it’s all over. “This time forever,” the cop adds.