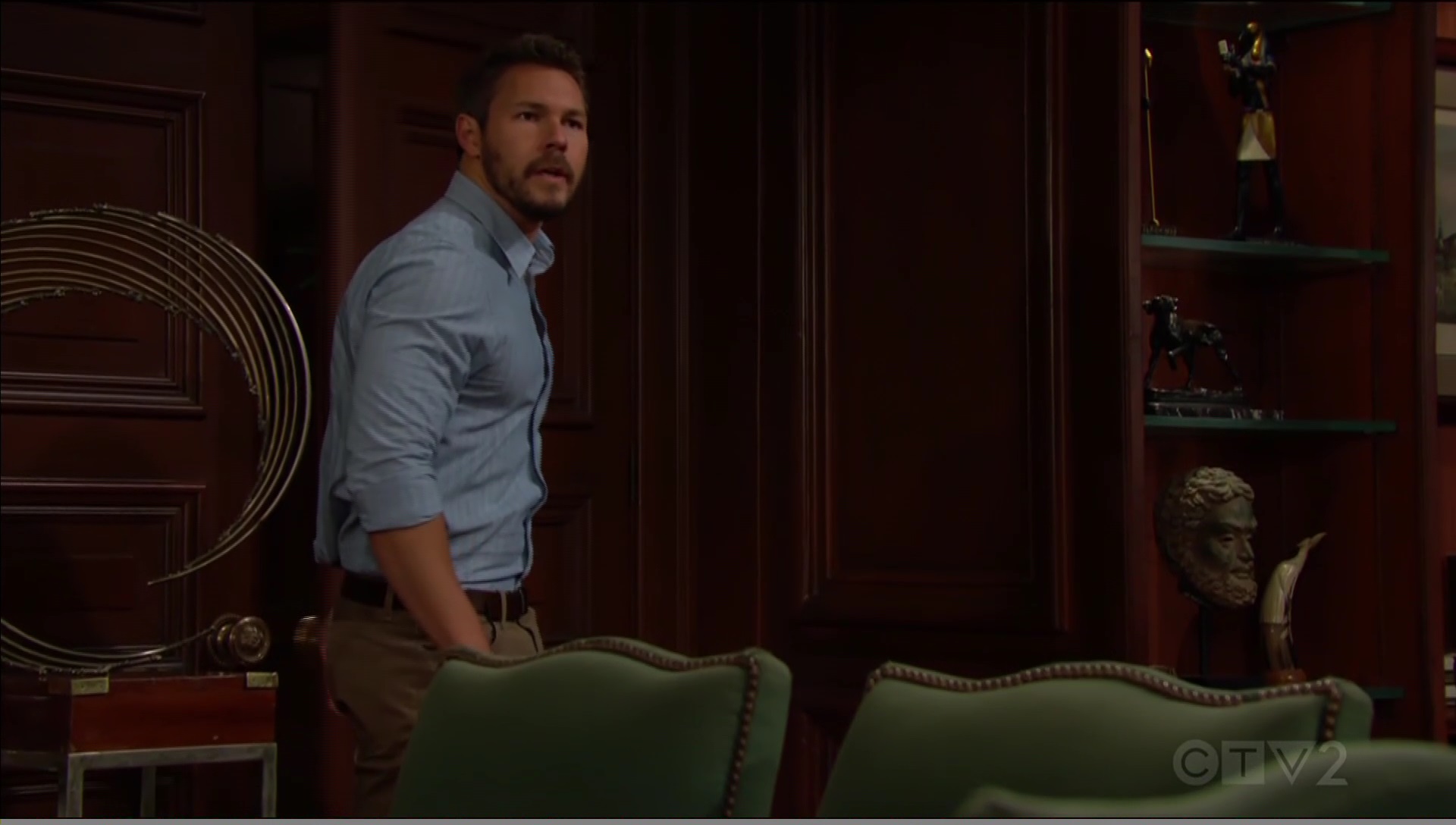 In the Wednesday, October 13, 2021, full episode recap of Bold and the Beautiful, Liam gets in Deacon’s face, Sheila continues to work on her manipulation skills with Deacon, and Thomas makes Paris a generous offer. Soaps Spoilers has Tuesday’s B&B recap where Sheila invited Deacon to live with her.

In Sheila’s room, Deacon drinks coffee and tells her coming up there was a mistake. If he wants to have a relationship with Hope he can’t be around her. Sheila doubts he’ll get near the Forresters on his own. She reminds him Hope hung up on him last night. He feels he can get through to her — today.

At Forrester, Zende asks Thomas how freaked out Hope is right now. He says she has the ability to see good in everyone. He’s not sure what Deacon’s return means to anyone. Paris strolls in and kisses Zende. Thomas looks away and she asks what’s going on and who Deacon is. “That’s a long ugly story,” Thomas says and Zende admits it’s Hope’s father. The men tell her all about the history between father and daughter and Thomas is sure that Deacon will hurt her. He gets word that his real estate agent found him the perfect place. He’s planning on subletting his apartment and mentions to Paris that since she’s living with a friend, why doesn’t she takes his apartment. “It’s fully furnished. Seriously, you can have it for free.” She thinks it’s too much. He tells her she’s part of the Forrester family. She says she’ll go look at it and thanks him. He’s headed there now so offers to take her. She kisses Zende and then looks at Thomas. 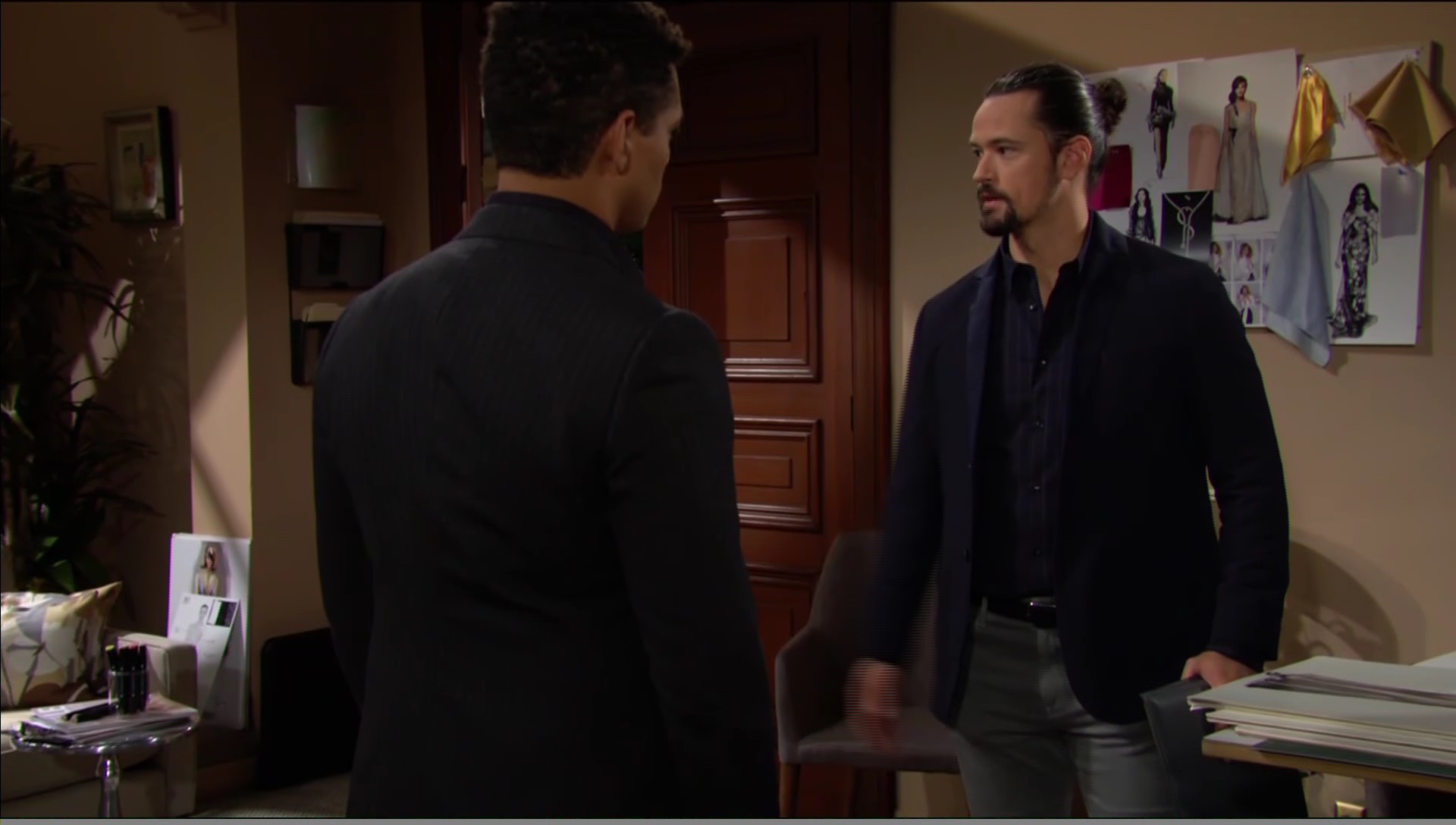 In her office, Hope is shocked to see Deacon in disguise. She tells him he can’t be there. “If someone sees you…” He’s sorry. He knows he’s let her down but he wants her to know he’s different now. She asks why she should believe him this time. He says he was reading her letter in his cell, which got him thinking of his regrets from his past. She was talking about the doctor who stole his baby and thought she lost her daughter, only to be reunited later. When she talked about the worst pain she’d ever been through, it got to him that he couldn’t be there for her and wipe her tears away. “It broke me.” She tears up. He knows he can be the father she deserves and asks for a chance. She tells him she knows Ridge and Brooke don’t want him in her life. They can grab a coffee in public but him coming here like this is a bad idea. Liam shows up blustering. “What the hell are you doing here?” Deacon sighs. He’s there to ask for a second chance. Not to con or manipulate. He wants to see his daughter and Beth. Liam yells that this is what Deacon does. He kicks him out. “You have caused Hope and her entire family nothing but pain.” Deacon agrees to go but wants to tell his kid that he loves her. She smiles slightly and he goes. She asks Liam not to be so harsh with him. He repeats what he said yesterday about not wanting the man to be a part of her life and how he’s hurt her.

Thomas shows Paris his apartment and she agrees to live there. They hug and grin at each other. He helps her move in since her stuff was already in her car. She signed the sublet paperwork already and offers to treat him to wings. His realtor calls and he tells her to make herself at home. He asks, “Am I sitting down, what do you mean?” The people who accepted his offer declined. He disconnects and tells Paris. The seller backed out and gave his place to his buddy. “I guess I’m not moving after all.”

Deacon returns to Sheila’s suite, dejected. She’s sorry it didn’t go well. She knows what it’s like to be rejected by her child. Deacon says he knows she was going to give him a chance but Liam talked to him like he was a piece of garbage. He thinks they should just quit. Sheila refuses. He doubts she’ll ever have a relationship with them. “You are starting to get obsessed again.” She did it with Lauren Fenmore and Eric Forrester. Sheila looks down and begins to rock as he tells her to leave the Forresters alone. She hates his defeatist attitude and is shocked he’s not obsessed the way she is about seeing her kids. She knows they can get their kids back together unless he wants to crawl back into that bottle again. She won’t stop until she gets what she wants. “I always get what I want,” she gripes.

Related: Y&R day ahead recap up at 5:45 PM EST, Victoria rages at Billy